After Samoa Joe unconscionably invaded AJ Styles’ home last week, SmackDown LIVE General Manager Paige kicked off the blue brand announcing that she considered firing Joe for his despicable actions. Joe, however, would not be fired because Styles wants a piece of his nemesis in their No Disqualification, No Count-outs, Anything Goes Match for the WWE Title this Saturday at WWE Super Show-Down.

Paige then tossed to a clip that The Phenomenal One sent her, where he apologized for not being at SmackDown LIVE, saying he needs to be home with his family and will not leave until he got confirmation that The Samoan Submission Machine was on a plane to Australia. Styles then made it clear that this would all end at WWE Super Show-Down when he would put Joe down for good.

Carmella was quick to respond when Andrade “Cien” Almas & Zelina Vega trashed the debut of “Truth TV” on social media over the weekend, prompting The Princess of Staten Island to challenge them to a mixed tag matchup on the blue brand.

Despite Almas & Vega having plenty of experience teaming together, Fabulous Truth came out firing on all cylinders. After Almas pulled Carmella off of Vega when she was going for a pinfall and blocked a kick from The Princess of Staten Island, R-Truth clobbered “Cien,” and Princess Mella trapped Zelina in the Code of Silence after several lightning-quick reversals to earn the tapout victory.

What started out as an exciting opportunity for the WWE Universe to see how The New Day whip up their Pancakes of Positivity quickly turned into a battering from The Bar.

Kofi Kingston, Big E and Xavier Woods were having their typical great time when Cesaro & Sheamus showed up to dampen the mood. Things quickly got tense when The Bar insulted The New Day and their pancakes. A full-fledged brawl broke out, but The Bar got the leg up when Cesaro threw flour into Kingston's face as he was setting up for the Midnight Hour. The Bar laid out all three New Day members, then targeted The New Day's trusty sidekick, Mr. Bootyworth. Sheamus & Cesaro poured pancake batter into his top hat, put the hat on his head and poured the rest of the batter all over him. From there, they demanded Mr. Bootyworth leave the ring as they celebrated with the SmackDown Tag Team Titles ... a possible omen of what's to come on Saturday?

Looking for retribution after Randy Orton brutalized him last week, Tye Dillinger went face-to-face with The Viper on SmackDown LIVE.

The Perfect 10 came out with a ferocious fury of strikes, even going as far to slam Orton onto the announcer's table. However, Dillinger could not sustain his rage against The Viper. Orton soon took over and began to systematically tear Dillinger apart, delivering a DDT to Tye on the floor. The Apex Predator then punctuated the beating by putting Dillinger's finger in between the turnbuckle apparatus and savagely ripping at it as The Perfect 10 gasped in pain.

A week after Aiden English promised to share a damning video of Lana from one night in Milwaukee, Rusev demanded that The Drama King show up tonight with this “bogus evidence.” The Mozart of Mayhem hit the scene, and after seemingly stalling for a bit, English presented a film he called “One Night in Milwaukee.”

The video featured Lana knocking on Aiden's hotel room door late one night, entering the room and saying she wanted to tell him something. The Ravishing Russian looked English right in the eyes and said, “I want you.”

The video immediately cut out, infuriating Rusev. English claims that there is more to the video, but due to several big-money offers, he is holding out on the rest of the footage ... at least for now. Aa furious Rusev was enraged, chasing after English as Lana stood shocked in the ring.

Shelton Benjamin asked SmackDown LIVE General Manager Paige for an opportunity over the weekend, and an opportunity he was presented: A one-on-one matchup with Daniel Bryan.

With Bryan's WWE Super Show-Down opponent The Miz belittling his rival from the announce desk, The “Yes!” Man and Benjamin threw down in a thriller that had the WWE Universe enthralled.

Benjamin really put the pressure on Bryan, but Bryan looked to be closing in on victory when he connected with some pivotal strikes. As Bryan was setting up for the Running Knee, however, Miz dashed up to the apron to distract him. Bryan disposed of The A-Lister, but the interference allowed Shelton to connect with Paydirt to pick up the huge victory.

After the match, a furious Miz dished out an unrelenting assault on his rival, bashing his head into the announce desk and finishing him off with a Skull-Crushing Finale four days before they battle for a WWE Title opportunity at WWE Super Show-Down.

With their tag team match at Saturday's WWE Super Show-Down on the horizon, Asuka took on Peyton Royce of The IIconics with their partners Naomi and Billie Kay patrolling ringside.

Royce attempted to slow down Asuka's blistering attack, but to no avail. Naomi neutralized an interference attempt from Kay at ringside, which cleared the way for The Empress of Tomorrow to execute a perfectly-placed Asuka Lock for a dominant tapout victory heading into Melbourne this Saturday.

Still riding high after putting Charlotte Flair down last week with a vicious blindside attack in the backstage area last week, SmackDown Women's Champion Becky Lynch doubled down this week by mocking up a WWE Super Show-Down poster that featured her standing triumphantly over Charlotte after the beatdown last week.

Having no time for any more of Becky's games, The Queen arrived and made a beeline for The Irish Lass Kicker. A melee immediately ensued, as Charlotte laid Becky out with a vicious spear and chucked Lynch right into the custom-made poster. Flair locked her nemesis in the Figure-Eight Leglock and a connected with a swift kick. With the bad blood somehow at an all-time high, Charlotte stood tall as Lynch tried to recover and recuperate with their WWE Super Show-Down clash just four days away.

The Bar interrupts the New Day 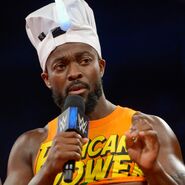 Retrieved from "https://prowrestling.fandom.com/wiki/October_2,_2018_Smackdown_results?oldid=1563819"
Community content is available under CC-BY-SA unless otherwise noted.