The October 2, 2017 Edition of RAW is a Professional wrestling television show of the WWE's RAW brand, which took place on October 2, 2017 at Pepsi Center in Denver, Colorado.

Seth Rollins talked the talk, and he walked the walk ... until Braun Strowman put him in the ground. The Kingslayer's plan to defy expectations by challenging Strowman ended in the same familiar fashion as The Monster Among Men's other conquests — Running Powerslam, 1-2-3 — though not before the Raw Tag Team Champion landed some impressive maneuvers of his own after a brief brawl outside the ring.

Nonetheless, not only did Strowman prevail, he quickly went to work on his foe after the bell. Rollins received some post-match reinforcement in the form of his tag team partner, Dean Ambrose, but Strowman made quick work of The Lunatic Fringe as well. Adding insult to injury, Cesaro & Sheamus resurfaced to inflict some more punishment on the Raw Tag Team Champions in the form of a Neutralizer to Ambrose and a Brogue Kick to Rollins. If nothing else, "The Bar" will not be cleared so easily.

Make it two in a row for Elias, who completed his sweep of Titus Worldwide's resident heavyweights when he defeated Titus O’Neil in a bout stemming from a post-match altercation with The Big Deal on last week's Raw. Titus stormed out of the starting blocks, manhandling his opponent across the ring and tossing Elias by his head around the squared circle.

Once again, however, an outside-the-ring altercation — this one between Elias and Apollo Crews — turned the tide, as the sinister songsmith bounced Titus’ throat off the top rope when he approached the cables, leading to a fateful Drift Away for the win and a brief post-match confrontation with Crews, but Elias opted not to follow through with a fight. The performance was concluded; no encores for Denver.

With Mickie James circling Alexa Bliss, it appears the Raw Women's Champion and Nia Jax's on-again-off-again partnership is on, again. Though, if what happened during Jax's bout with Mickie (a match seemingly finagled by Alexa after a backstage prank put James in the path of Little Miss Bliss’ occasional enforcer) is any indication, even that might not be enough to hold James back in the long run.

Not only did Mickie refuse to give in despite a powerful display from Jax, the six-time Women's Champion James pulled off a miracle reversal to hit a tornado DDT off the ropes. The move seemed like such a surefire match-ender that Bliss broke up the ensuing pinfall attempt, handing James a disqualification victory. A post-match Mick Kick to Little Miss Bliss left Alexa humiliated for the second straight week, but her combined effort against both Superstars was enough to land Mickie what she was looking for since the beginning: A Raw Women's Title Match at WWE TLC.

Forced together by circumstance, Matt Hardy & Jason Jordan caught lighnting in a bottle by claiming a tag team win last week, and after running afoul of Luke Gallows & Karl Anderson in the backstage area tonight, a few fighting words were exchanged — “nerd” chief among them — leading them to join forces one more time for an effort against the good brothers. If only it went as well this time around.

Much like last week, Hardy pulled Jordan out of the fire following an extended isolation at the hands of Gallows & Anderson. But the end result was as different as could be, as Anderson disposed of Jordan by hurling him into the barricade, and Gallows rammed Hardy into a turnbuckle he had discreetly exposed earlier in the match, weakening Matt for the ring-shaking Magic Killer.

While it would obviously be a shame for an impromptu team as fun as Hardy & Jordan to go one and out, it's fair to wonder after tonight if the more established tandems of Team Red have them figured out.

October is Breast Cancer Awareness Month, and to honor survivors across the nation, Dana Warrior — wife of late WWE Hall of Famer The Ultimate Warrior — gathered with the Raw Women's division to bestow Dianne Primavera, Julie Zaveral and Sherri Goldstein with custom Raw Women's Championships to honor their “Warrior spirit.”

To help with the fight against breast cancer, please visit WWEShop.com, where a portion proceeds from the WWE Susan G. Komen Collection benefit the search for the cure.

The Miz has demanded respect for months now, but the Intercontinental Champion aping The Shield with his squad might have been a bridge too far. After he and The Miztourage mimicked The Shield's entrance through the crowd (one week after doing the fist bump, mind you) before his title match with Roman Reigns, The Big Dog snapped, obliterating Bo Dallas & Curtis Axel with a steel chair before the match could start.

Miz, impressively, nearly finagled his way to a count-out win in the ensuing title bout and later reversed the Superman Punch into a Skull-Crushing Finale, but Reigns would not be denied. He kicked out of Miz's big move and clocked him with a Superman Punch, but Cesaro & Sheamus quickly interfered before Reigns could uncork a Spear on The A-Lister.

“The Bar” — whom Reigns had less-than-flattering words for after their beatdown of his old allies Dean Ambrose and Seth Rollins — worked in perfect sync with Miz to decimate Reigns, feeding him into each other's signature moves (Neutralizer, Brogue Kick, Skull-Crushing Finale) before administering The Shield's final signature, the Triple Powerbomb, to Reigns, and joinng in the signature fist bump. (The display was enough to earn "The Bar" a guest slot on "Miz TV" next week.)

Ironically, while Reigns licked his wounds at the very end of Raw, he received a pointed visit from Ambrose and Rollins, who wordlessly stood by The Big Dog's side in solidarity. The Miz has been asking all along if The Shield could hang with today's WWE, three years after they imploded. He might get his answer yet.

Bray Wyatt has battled every permutation of Finn Bálor, but it would appear that Finn Bálor has not seen The Reaper of Souls’ own personal demon just yet.

Following The Eater of Worlds’ ominous serenade last week, Bálor demanded answers from Wyatt and received them; while The New Face of Fear did indeed fall to The Demon and the Man, the former WWE Champion still believed that Finn was still truly a demon at heart. He commanded Finn to bring The Demon once again, and in return, Wyatt would reveal his own true self.

“Abigail is alive,” he said, as his face transformed before Bálor's eyes, “And she is dying to meet you.”

Last week, Emma's tag team with Nia Jax fell short both in the ring and in the Twitter trending department, so she deduced a plan to find a partner who respected her accomplishments and complimented her skills. Alicia Fox fit the bill, but the impromptu alliance went much the same way as the previous one when tested by the team of Bayley & Sasha Banks — well, almost the same way.

Oddly enough, it once again fell apart when Emma's partner suffered a head-on collision. With Nia it was the ring post, but Alicia was thrown straight into Emma as a last-ditch effort by a weakened Banks, who tagged in Bayley to bat cleanup. Fox, who turned in an impressive performance all match long, went to tag in Emma after slowing The Huggable One down, but Emma straight-up ditched her partner, leaving Fox to suffer a bone-rattling Bayley-to-Belly and the pin. You've gotta hand it to Emma: Even in a loss, she makes it all about her.

Last week, WWE Cruiserweight Champion Enzo Amore was annihilated at the hands of every single Cruiserweight in the division, a tear-inducing humiliation that carried the silver lining (for Enzo) of each Superstar forfeiting a title opportunity, as they had each violated The Certified G's No-Contact clause. This week, Enzo didn't just rub that lack of restraint in their faces, he introduced another Kurt Angle-ratified clause: That any Cruiserweight who touched him tonight would be fired.

Enzo went on to proclaim himself the most dominant, and relevant, of all the Cruiserweights, and at the end of his diatribe, Neville marshalled the division to surround Muscles Marinara once again. While Enzo seemed nervous at the outset, his tune quickly changed when he produced the updated clause, at which point Smacktalker Skywalker ran them all down individually and in astounding fashion (except for Akira Tozawa, who got a free pass thanks to this).

That is, until he got to Neville, and Kurt Angle himself arrived to point out a glaring loophole in the clause. While none of the Cruiserweight at ringside could lay a hand on Enzo, Angle did sign a new Superstar exempt from the red tape: Kalisto.

The former United States Champion made quite the first impression in the Cruiserweight division, laying out the champion with a jaw-dropping Salida del Sol. Muscles Marinara might have the sauce, but he might have just met the fly in the ointment. 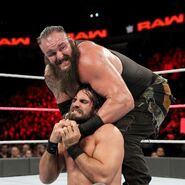 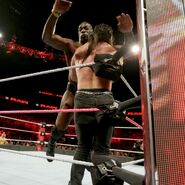 Roman Reigns vs. The Miz 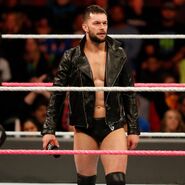 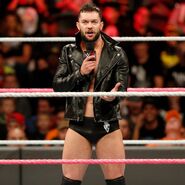 Retrieved from "https://prowrestling.fandom.com/wiki/October_2,_2017_Monday_Night_RAW_results?oldid=1563818"
Community content is available under CC-BY-SA unless otherwise noted.