The October 2, 2009 Edition of Smackdown is a Professional wrestling television show of the WWE's Smackdown brand, which took place on September 29, 2009 from the TD Garden in Boston, Massachusetts. This episode marked as the 10th Anniversary celebration of SmackDown.

General Manager Theodore Long greeted a line of guests, including the Hart Dynasty, RAW Divas Beth Phoenix & Alicia Fox & Jillian Hall, Chavo Guerrero (also from RAW), ECW interviewer Savannah, and the legendary Brooklyn Brawler. Long also greeted Maria and said she looked beautiful tonight. Hornswoggle gave Maria a glass of champaign and slapped her on the ass. Former SmackDown! announcer Michael Cole yelled “vintage Hornswoggle!” Cole said he's eaten two dozen shrimp tonight, and suggested Long try some. Long said he would have some later, but then Cole asked him to have a drink with him. Long ordered a diet Pepsi, but Fit Finlay came by and ordered four Irish Whiskey's. Cole yelled “vintage Finley!” Long didn't want to drink, but Finlay said one of those would put his life back on track. Cole was dipping his shrimp into his Whiskey. Finlay did a toast to celebrate a Decade of SmackDown!. Just before Long was about to take his shot, CM Punk showed up and stopped him. Punk said as long he is World champion then SmackDown! would be prohibition rules. Everyone except for Long kept drinking anyway. Long's attention was then caught by “EXCUSE ME!” former SD! General Manager Vickie Guerrero, who scolded Long for lifting her ban on the Undertaker’s Hells Gate submission. Vickie said some people just don’t have the backbone to run this show. Vickie’s “hot new boyfriend” showed up and introduced himself as Eric Escobar. Vickie said Mr. McMahon signed him to SmackDown! and already given his approval for her to return to SmackDown! to manage him. Theodore Long got a sick look on his face, and it doubled when the lights went out and Santino Marella showed up dressed as the Undertaker. Long downed his shot of Whiskey to settle his nerves! Gosh, it's going to be a long night of recapping these crazy backstage party segments!

Michael Cole was found getting drunk with Fit Finlay, still eating shrimp, and shouting “vintage shrimp!” In the background, Slam Master J dropped a napkin and snuck a not-so-subtle peak at Rosa Mendes’ hot latina butt. Hornswoggle came around with some more drinks and Cole made a joke about Hornswoggle and shrimp, so Hornswoggle kicked him in the shin! Zack Ryder was trying to get into the VIP section, which was occupied by Montel Vontavious Porter, Mark Henry, and the Bella Twins. Hornswoggle was allowed to enter, as Ryder pleaded his case for entry – even trying to brib Henry with money. Matt Hardy & Kelly Kelly showed up and were immediately let into the VIP section along with Alicia Fox, Rosa Mendes, Charlie Haas (seriously?), Layla, Savannah, Sgt. Slaughter (ridiculous), Maria Kanellis, and the Iron Sheik! Leaving Zack Ryder outside the gate. Ryder complained, “you’re going to let the Iron Sheik in and not Zack Ryder?” The Iron Sheik turned around and yelled “ho ho ho you know it jabroni!”

Jack Swagger joined Jim Ross & Todd Grisham on commentary but didn't say anything while he was out there.. This match was made interesting by the first time faceoff with The Miz and John Morrison since they were split up by the draft. Ziggler challenges Morrison for the WWE Intercontinental Championship, and the Miz & Swagger challenge Kingston for the WWE United States Championship in a 3-WAY at Hell in a Cell. The match ended with Ziggler pinned Ic champion John Morrison to win the match!

Kung Funaki & Yoshi Tatsu were shown singing Shawn Michaels theme music “Sexy Boy” when Jillian Hall jumped on stage and took over (even though the music stopped). Sgt. Slaughter got into a verbal confrontation with the Iron Sheik. Sheik started to choke and The Hurricane showed up to save the day. The Sheik spit out the shrimp and it landed in Michael Cole's glass, so he picked it up and ate it! Chris Jericho and Big Show crashed the party and said they should be the guests of honor because they were on the very first episode ten years ago. Jericho said not only were they the most powerful, but they have the most longevity as well. Jericho said it was time to wrap the party and start showing he and the Big Show the respect they deserve. All of a sudden, Michael Cole barfed all of his shrimp up all over Jericho. The Big Show started to puke and ran off camera. Joey Styles showed up and yelled “OH MY GOD!!!” but lacked his usual enthusiasm..

The Rock came up on the big screen, in a taped segment from his home in Florida. The Rock delivered an amazing eight minute promo to celebrate a Decade of SmackDown!, the show which was named after him. The first part he teased the crowd with the wrong lines, but finally remembered how to say “FINALLY, the Rock has come back to SmackDown!” The Rock told director to take the microphone, shine it up nice, turn it sideways and shove it up his [you know the rest]. The Rock said he was there when it all began, when he first said the magic words that changed the English language forever – laying the Smack Down on all your candy asses! The Rock talked about dropping the most electrifying move in sports entertainment, the people's elbow, and unleashing the Rock Bottom, to finding a new place to dwell (down and the end of jabroni drive at SmackDown! hotel!). The Rock talked about the first time he walked out on SmackDown! as WWE champion and everybody in the arena was chanting the Rock's name! This started a live “Rocky” chant that probably wasn't as loud as they had hoped it would be. The Rock said ten years later, some guy named C.M. Punk is champion. The Rock said Punk was straight edge, doesn't drink doesn't smoke, and sits down when he uses the toilet. The Rock said they should call him B.M. Punk for “Bowel Movement” which is what the audience wants to take every time he opens his mouth to start talking! The Rock said he's never faced Punk, but he has faced Punk's “Hell in a Cell” opponent, the Undertaker. The Rock talked about making history with the Undertaker and whipping his ass all around the world, but then changed his mind and asked that part to be edited out because he didn't want to get tombstoned. The Rock pulled the director in front of the camera and asked him a question, only to yell “it doesn’t matter what you think!” The Rock ripped opened the guys shirt and pointed at his hairy chest and said “seriously, shave that, it’s disturbing!” The Rock predicted that there would be a new World champion this Sunday and there would be a new era of SmackDown! – but the show will always belong to him. The Rock said now that he's tried SmackDown! maybe it was time for him to guest host RAW! The Rock then did his IF YOU SMELLLELELEL WHAT THE ROCK IS.... COOKING! – making the camera zoom in on his face before saying the word “cooking” .... Promo of the year!

The Undertaker delivered a message to C.M. Punk, talking about reclaiming the World Heavyweight Championship. Undertaker said that Punk will soon crave drugs and alcohol that he now despises.

Drew McIntyre crashed the party, and said he would like to make a toast. McIntyre said “here’s to SmackDown!, here’s to your future world champion, here’s to Drew McIntyre, and here’s to the party just gettin’ started!” McIntyre took a drink, and he was attacked by R-Truth. They brawled all over the place and even rolled over the big SmackDown! cake that had been brought in special before they were separated. 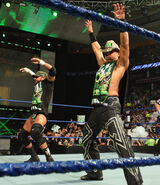 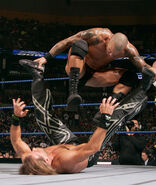 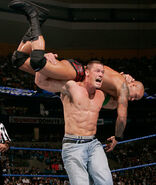 Retrieved from "https://prowrestling.fandom.com/wiki/October_2,_2009_Smackdown_results?oldid=1583868"
Community content is available under CC-BY-SA unless otherwise noted.