October 26, 2016
The October 19, 2016 Edition of NXT is a Professional wrestling television show of the WWE, which took place at the Full Sail University in Winter Park, Florida on October 13, 2016.

There may not be a more high-energy, fun-loving tandem in the NXT Universe than No Way Jose & Rich Swann. Despite their obvious connection and love for breaking it down, the question still remained of whether they could achieve success inside the ring. That question was answered when Jose & Swann took on the extremely tough tag team of Tony Nese & Drew Gulak in the first round of the Dusty Rhodes Tag Team Classic.

As it turns out, Jose's strength, combined with Swann's acrobatics, not only made for a winning team, but an exciting combination. When Swann took Nese out at ringside via a spectacular aerial maneuver, Jose took full advantage by picking up the pinfall on Gulak back inside the squared circle.

Sean Maluta – who was among the 32 competitors in WWE Network's groundbreaking Cruiserweight Classic – didn't seem intimidated by the gloriousness of Bobby Roode. Unfortunately for Maluta, Roode was in top form, as he planted his opponent with a DDT to pick up the pinfall victory.

Following the contest, Roode added insult to injury to his TakeOver: Toronto opponent, Tye Dillinger, by telling everyone he took The Perfect 10 on as a partner for the Dusty Rhodes Tag Team Classic because he felt bad for him. In the midst of Roode's insulting speech, Dillinger rushed the ring, engaging Roode in a round of fisticuffs before clotheslining the glorious Superstar from the ring.

Billie Kay and Peyton Royce have formed an impressive and cruel alliance over recent weeks. Unfortunately for Liv Morgan, she has ended up on the receiving end of the pair's viciousness. The aggressive Australian duo continued their attack against Morgan this week by blindsiding the New Jersey native during a backstage interview.

The brutal assault continued out onto the stage for the crowd at Full Sail University to see. Then, Kay and Royce made it clear that they control the Women's division, even making a point to put NXT Women's Champion Asuka on notice.

Austin Aries’ mystery partner was revealed to be none other than Roderick Strong, who proceeded to make his highly anticipated NXT debut alongside “The Greatest Man That Ever Lived.” It's hard to imagine two such talented competitors being defeated in the first round of the Dusty Rhodes Tag Team Classic, but they were pushed to the limit by their enormous opponents, Tucker Knight & Otis Dozovic.

Knight & Dozovic utilized their immense size and strength advantage to overpower their opponents at times during the contest, but in the end were upended by a nearly flawless attack from Aries & Strong. The talented tandem delivered a perfectly timed combination of moves on Knight, capped off by a running dropkick from Strong to pick up the pinfall.

Nikki Cross may prove to be the most unstable member of SAnitY, which is saying something. Cross made quick work of Danielle Kamela, defeateding her soundly with an emphatic suplex. Following the contest, the crazed Cross – who was biting her hands and clawing at her face during the match – pounced on her fallen opponent, punching her relentlessly.

Eric Young pulled Cross off of Kamela, only to be forearmed in the face by the unstable Cross, who then continued to attack her foe. As a result of Cross’ unrelenting post-match assault and unwillingness to stop her attack, the referee reversed the decision, awarding the match to Kamela.

The NXT Universe was certainly pleased to have NXT Champion Shinsuke Nakamura back, welcoming the titleholder with chants of “Nakamura!” The King of Strong Style had his sights set on his TakeOver: Toronto challenger Samoa Joe, but his message was interrupted by “The Patrick Clark Experience.” The former Tough Enough competitor bravely challenged Nakamura to a match, only to be met with a combination of kicks that immediately knocked Clark out cold.

Joe then arrived, staring down Nakamura from the ramp as the champion gave a preview of what to expect in Toronto by hitting Clark with a Kinshasa. 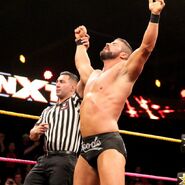 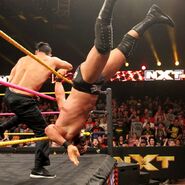 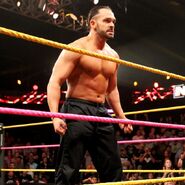 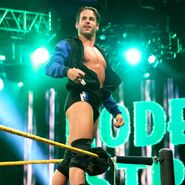 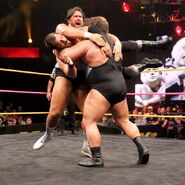 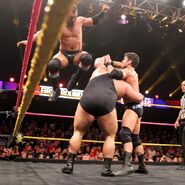 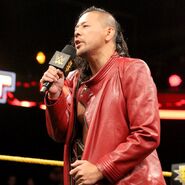