The October 17, 2011 Edition of RAW is a Professional wrestling television show of the WWE's RAW brand, which took place on October 17, 2011 at the Palacio de los Deportes in Mexico City, Mexico.

Many WWE fans were surprised by the words that came out of John Laurinaitis’ mouth in Mexico City — “I’m sorry.” Admitting that thousands of incendiary Twitter messages from the WWE Universe helped him realize that it was wrong to fire Jim Ross last Monday night, (WATCH) the Interim Raw General Manager invited the WWE Hall of Famer into the ring and apologized for his public termination. Mr. Laurinaitis did not welcome J.R. back to the announce booth, though. Instead, he declared a special main event for tonight — John Cena & Jim Ross vs. WWE Champion Alberto Del Rio & Michael Cole.

Randy Orton and Sheamus may be two of WWE's most destructive competitors, but they're not exactly team players. Looking to get his hands on his Vengeance opponent during this wild bout, The Viper chased the despicable Cody Rhodes out of the arena while The Celtic Warrior battered Christian through the crowd. All this mayhem left John Morrison alone in the ring with Mark Henry who crushed The Prince of Parkour with The World's Strongest Slam for a decisive victory. The only question is: can he do the same thing to Big Show on Sunday?

Confronted by a livid Alberto Del Rio in the locker room of Mexico City's Palacio de los Deportes, John Laurinaitis promised there was a method to the main event he placed the WWE Champion in tonight — the winner of the tag bout will be able to select the stipulation for the WWE Title Match between Del Rio and John Cena at Vengeance.

Before her showdown with the dangerous Diva from Calgary, Alberta, Canada, the beautiful Eve was announced as Divas Champion Beth Phoenix's opponent at Vengeance. It was a title opportunity the athletic competitor proved she deserved as she defeated Natalya with an impressive moonsault, giving her added momentum going into Sunday.

Wherever The “Awesome Truth” goes, controversy follows. Ridiculing both CM Punk and Triple H before the bell even rang, The Miz and R-Truth insulted The Cerebral Assassin to the point that he came to ringside to watch The Straight Edge Savior's back. It was a good thing he was there. After Truth attempted to get involved in the bout, Triple H chased him off only to be stopped by Mr. Laurinaitis. Revealing that there was an immigration issue that prohibited The Game from being in Mexico City, the Interim Raw General Manager requested that Triple H leave the premises — or be taken out by security.

Now outnumbered, The Voice of the Voiceless took advantage of his situation, knocking The Awesome One into his tag partner before rolling him up for the quick victory. Punk's celebration was short-lived, however, as his Vengeance opponents ruthlessly stomped him after the bell.

Leave it to Jack Swagger, Dolph Ziggler and Vickie Guerrero to nearly create an international incident. After the cougar announced that her clients will challenge Air Boom for the WWE Tag Team Titles on Sunday, the United States Champion and The All-American American unleashed some jingoistic rancor that would make even the most adamant tea partier hang their head in shame — and that's before Swagger started singing The National Anthem. Thankfully interrupted by Zack Ryder, Swagger soon proved that he was even worse in the ring than he was on the mic as he fell to Long Island Iced-Z's Rough Ryder in less than a minute.

The humiliation wasn't over for Vickie's boys just yet. Immediately placed in a match against the devastating Mason Ryan, Ziggler was dominated by the wrecking machine before Vickie stepped in and slapped the beast across the face. The Welsh powerhouse was so incensed by the smack that he mercilessly pounded Ziggler until the official called for the bell. Had the match not been stopped, the ring crew may have still been peeling the United States Champion off the canvas.

The near-60-year-old Jim Ross was in no rush to step into the ring, but that wasn't a problem tonight. Feeling determined going into his match against Alberto Del Rio on Sunday, John Cena dominated The Mexican Aristocrat to the point that he tagged off to Michael Cole and fled the ring. Unable to talk himself out of this one, the sniveling announcer was smashed by the West Newbury, Mass. native. After delivering a massive Attitude Adjustment, Cena tagged out to his partner and let Good Ol’ J.R. finish Cole with a wrenching ankle lock submission.

Now able to choose the stipulation for his bout against the WWE Champion on Sunday, Cena smashed Del Rio on the arena floor, delivering a huge Attitude Adjustment to The Mexican Aristocrat before battering him with the steel ring steps. The powerful Superstar then grabbed a microphone and counted to 10. It was a brutal preview of the type of contest the challenger had selected for Vengeance — a Last Man Standing Match. 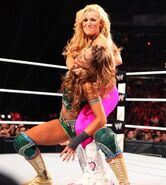 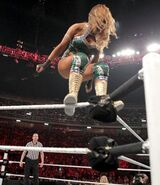 Retrieved from "https://prowrestling.fandom.com/wiki/October_17,_2011_Monday_Night_RAW_results?oldid=1563695"
Community content is available under CC-BY-SA unless otherwise noted.