The Shield may have formalized their reunion last week with their trademark fist bump, but for the first time in three years, Raw opened with the crackle of “Sierra, Hotel, India... ” and the sight of Dean Ambrose, Seth Rollins and Roman Reigns donning black and marching through the audience to surround someone in the ring — in this case, Raw General Manager Kurt Angle, who quickly turned over the mic and made his exit.

It was awesome (as the WWE Universe chanted), and if there were any concerns that The Hounds of Justice had lost a step, they immediately launched into a scorched-earth proclamation to pick up right where they left off at WWE TLC. And even though Ambrose's tough talk inadvertently got Braun Strowman added to the upcoming TLC Match last week, The Lunatic Fringe only doubled down on his resolve — he reiterated that The Shield could take on any number of opponents and challenged their TLC foes to throw down on the spot.

The Miz, Braun Strowman and The Bar came to the stage to oblige, but Angle got between the two squadrons, reminding them that The Bar would challenge Ambrose & Rollins for the Raw Tag Team Titles and Strowman would battle The Big Dog in a Steel Cage Match tonight.

It was enough to stop the fists from flying, but there'll be no such restraint on anyone's part come Sunday.

For once, Elias didn't have to ask someone to walk with him on Raw: He found a couple of good brothers to accompany him.

But recruiting Luke Gallows & Karl Anderson to his side didn't do much to protect Elias against the assembled crew of Titus Worldwide (whom he's antagonized in recent weeks) and Jason Jordan (who he eviscerated in song before their match). Jordan & Co. were all over their opponents from the jump, and despite an all-out brawl that threatened to take the match away from them, Jordan and Apollo Crews one-two’d Anderson with a combo of a spear to the corner and Crews’ Spinning Sit-out Powerbomb for the 1-2-3.

Gentleman Jack Gallagher and The Brian Kendrick have done just about everything in their power to take Cedric Alexander out of the running on 205 Live, but they're a ways off from reaching that goal. In a rivalry that's been filled with sneak attacks, the Gentleman's straight-up singles bout against Alexander was short, swift and almost entirely in the latter's favor.

Alexander was all over Gallagher from the beginning, largely because the presence of Kendrick was neutralized by Rich Swann, who backed up the five-tool Superstar at ringside. Gallagher managed to get a leg up after a brief fracas between Kendrick and Swann, but when Swann wiped out The Man with a Plan with a wicked tornado DDT on the outside, Cedric sealed the deal with a Lumbar Check that turned Gallagher inside out. A solid win, but unfinished business looms large in the coming days when Gallagher faces Swann on 205 Live tomorrow, and the four Cruiserweights take the ring in tag team action on Sunday.

Braun Strowman is a man of relatively few words, so he didn't have much to say on “Miz TV” when it came to his Steel Cage Match with Roman Reigns or the upcoming TLC Match against The Shield beyond the broad promise of destruction beyond compare.

Of course, the most important voice on “Miz TV” is that of the host, and the Intercontinental Champion once again tried to use Dean Ambrose's words against him. Specifically, he made his case that, since Ambrose once again claimed The Shield could take on up to five opponents and win, The Miz should be allowed to pick a fifth member for his squad on Sunday. (The audience, for what it's worth, was completely in favor of Curtis Axel rounding out the team.)

Raw General Manager Kurt Angle had finally had enough, and he offered Miz a one-time-only deal after this latest tirade: If Strowman defeats Reigns in the Raw cage match, Miz gets his fifth man. If not, Strowman is out and the match goes back to being 3-on-3. While Miz seemed unsure of which option to choose, Strowman shocked everyone by accepting on The A-Lister's behalf. He may be a man of few words, but he makes them count. And Angle made his count as well, when he banned both Miz's crew and the rest of The Shield from ringside to ensure a fair outcome.

Alicia Fox shocked the world by pinning Bayley last week in a Fatal 5-Way Elimination Match and, if you ask her, she was cheated out of a would-be win when the official claimed Sasha Banks had submitted her in the same bout. (Fox said she was scratching her nose.)

To Fox, that constitutes a pattern of disrespect for the 10-year veteran, but her bid for redemption against The Boss fell short on Raw, despite another very impressive effort that saw her grind Sasha down to the mat for minutes on end. A quick reversal of a tilt-a-whirl backbreaker into a Bank Statement gave Sasha a submission victory, leading to an epic temper tantrum fom Fox and a vicious backstage sneak attack on The Boss in retaliation. And while Alicia certainly got Raw General Manager Kurt Angle's attention when she shoved an official to the ground after jumping Sasha from behind (she was fined an undisclosed amount of money), it might take a rematch at WWE TLC Kickoff for her to finally get the last word against Banks.

When he was WWE Cruiserweight Champion, Enzo Amore couldn't buy an ally with all the merchandise checks in the world. Now that he's not, it appears that The Realest Guy in the Room has a few boys to back him up. When the new champion, Kalisto, got in Enzo's face after Muscles Marinara cried foul over losing his title last week, Tony Nese, Drew Gulak, Ariya Daivari and Noam Dar jumped The King of Flight from the timekeeper's area and laid a savage beatdown on the titleholder. And when Mustafa Ali — who arguably cost Enzo the title last week — attempted to even the odds, they did the same to him. Kalisto will get a chance at payback tomorrow when he and Ali battle Enzo & Daivari on 205 Live, but it appears the previously solitary Enzo is no longer content to be easy pickings for anyone who tries to cross him.

Perhaps it was the thrill of being back in black, but Dean Ambrose & Seth Rollins were even more rabid than usual in a successful retention of the Raw Tag Team Titles against Cesaro & Sheamus, whose opportunity had only been sanctioned hours earlier.

After getting taken out early, The Lunatic Fringe re-entered the match like a house on fire in relief of Rollins, who had been neutralized for a stretch. The Bar upped the ante with Ambrose running rampant, mixing both smarts (Cesaro wisely avoided another slingshot into the ropes) and power (Sheamus hoisted Ambrose up for a Cesaro springboard uppercut). But Rollins provided the final boost for his brother, rushing the match and instigating a brawl that The Lunatic Fringe closed out with Dirty Deeds to The King of Swing for the victory.

For his fourth showdown against Finn Bálor, Bray Wyatt unleashed the spirit of Sister Abigail herself upon the WWE Universe. So, to prepare for the showdown, the former Universal Champion called his Demon into the light. Promising to channel the Irish heroes of old to combat the "monster" Wyatt had unleashed into the world, Bálor transformed into the Demon on the spot to show the WWE Universe, and Wyatt, what he was capable of. To cap off his display, he offered The Reaper of Souls’ own warning to him: “Run.”

This Sunday, Alexa Bliss will defend her Raw Women's Title against Mickie James, while Emma holds the prestigious if unenviable task of facing Asuka in her Team Red debut. If what happened on Raw is any indication, both women have a long week of soul-searching ahead of them, as they fell to the team of Bayley & James in a fast-paced tag team contest.

Not only did Mickie look every bit ready to claim her seventh Women's Championship, Bayley didn't look far away from title contention herself, holding off Emma and Bliss singlehandedly before tagging James into the fray. A devastating Mick Kick to Alexa minutes later both spelled the end of the contest and sent the champ and her teammate back to the drawing board with only six days to figure it out.

Raw General Manager Kurt Angle banned The Miz, The Bar and The Shield from ringside to prevent outside interference and preserve the integrity of Roman Reigns vs. Braun Strowman in a Steel Cage, a match that would determine the complexion of the big TLC Match on Sunday. But he didn't say anything about inside interference, and now Strowman's victory expands The Shield's opponents from four to five as a result.

To be fair, the rival teams ignored Angle's initial decree as well, rushing the cage despite the General Manager's orders. The Miz's crew struck first, with The Bar cutting Roman off at the pass when he tried to escape the cage after momentarily felling Strowman. The Shield quickly neutralized the interference, but The Monster Among Men hauled Reigns over the cage right into a superplex, and when the brawl between The Shield and The Bar continued into the parking lot, Miz himself locked them out of the arena by closing the door of the loading dock.

Reigns managed to fight his way back into contention by hitting Strowman with three Superman Punches and a Spear, but the tide quickly turned when the arena plunged into red light and Kane rose from beneath the ring to administer two bone-rattling chokeslams to the former WWE Champion. Strowman followed up with a Running Powerslam, The Big Red Monster piled on with a Tombstone, and a second Running Powerslam from The Gift of Destruction earned the decisive pinfall and expanded his squadron by one for Sunday in the process. And, as Miz informed the WWE Universe, in case that wasn't enough of a hint, The Devil's Favorite Demon was, indeed, his final teammate for WWE TLC.

Dean Ambrose said The Shield could take on five opponents and win. The Hounds of Justice are about to be put to that exact test.

The Shield address their TLC opponents 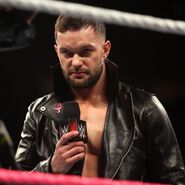 Retrieved from "https://prowrestling.fandom.com/wiki/October_16,_2017_Monday_Night_RAW_results?oldid=1563698"
Community content is available under CC-BY-SA unless otherwise noted.