The October 14, 2011 Edition of Smackdown is a Professional wrestling television show of the WWE's Smackdown brand, which took place on October 11, 2011 at the American Airlines Center in Dallas, Texas.

The night started with major news. With new Interim Raw GM John Laurinaitis at his side, Teddy Long announced the first match of the night would feature 41 Superstars in the largest Battle Royal in WWE history. Laurinaitis then revealed the winner would earn a title match against the champion of his choosing.

During the mayhem, powerhouses like Mason Ryan and Sheamus eliminated multiple Superstars. With bodies flying, a Brogue Kick from The Celtic Warrior sent The Miz careening from the ring. But since Miz didn't go over the top rope, he was still in contention. In contrast, even though Christian was eliminated, in a devious move, he reentered the ring and took Sheamus out of the hunt.

As the field thinned down to the final two combatants, Miz found himself battling Randy Orton tooth-and-nail for the championship opportunity. With both Superstars tangling with each other on the ring apron, The Viper downed Miz with an RKO. In a wild finish, the momentum from the RKO carried both Superstars to the arena floor. But since Miz's feet hit just before Orton's, the victory went to The Viper.

Despite showing signs of her new, aggressive style, Kelly Kelly could not overcome Divas Champion Beth Phoenix, who successfully defended her title with a devastating Glam Slam.

In the ongoing rift between the two Sin Caras, Sin Cara (Negro) brutally attacked Sin Cara (Azul) in the backstage area, ripped off his blue mask and put it on himself. Later, he kept the blue mask on and wore it during his match with Justin Gabriel, who he defeated with a leap from the top rope.

For the second time in the night, Christian screwed Sheamus. With The Celtic Warrior perched on the turnbuckle, Christian appeared out of nowhere and pulled Sheamus’ feet out from under him. WWE Champion Alberto Del Rio quickly seized the opportunity by kicking Sheamus twice in the head and pinning him. Afterward, Christian put the punctuation mark on his dastardly deed by blasting The Celtic Warrior with two hard-hitting spears.

Zack Ryder continued to generate attention for himself by convincing SmackDown GM Theodore Long to put him in a match because WWE Tag Team Champion Evan Bourne is injured. Picking up a huge win for his team – and more momentum in WWE – Ryder pinned United States Champion Dolph Ziggler.

When Randy Orton won the 41-Man No. 1 Contender's Battle Royal at the start of the night, there was no hesitation when he said the champion he wanted to face was World Heavyweight Champion Mark Henry. Although Orton held his own against The World's Strongest Man, The Viper's quest to regain the World Title was thwarted by a sneak attack from Intercontinental Champion Cody Rhodes.

After leaping into the ring and stomping on Orton, Rhodes was prepared to humiliate him further by placing a paper bag over his head like he did on Monday's Raw. However, on this night, Big Show charged to the ring, sending Rhodes scurrying for cover. Then after driving Henry to the canvas with a shoulder tackle, The World's Largest Athlete fed Rhodes to Orton, who promptly dropped him with an RKO. To cap things off, Show demolished Henry with a chokeslam, leaving Orton and Show standing tall. 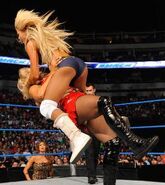 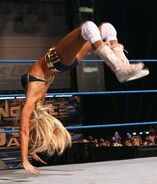 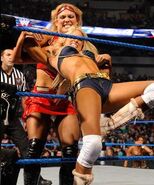 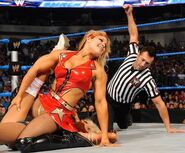 Retrieved from "https://prowrestling.fandom.com/wiki/October_14,_2011_Smackdown_results?oldid=1563669"
Community content is available under CC-BY-SA unless otherwise noted.