October 19, 2016
The October 12, 2016 Edition of NXT is a Professional wrestling television show of the WWE, which took place at the Full Sail University in Winter Park, Florida on September 15, 2016.

ORLANDO, Fla. — Anarchy reigned this week, as NXT kicked off with the unsettling arrival of SAnitY.

The NXT Universe was ecstatic about seeing Tye Dillinger and Bobby Roode join forces for the Dusty Rhodes Tag Team Classic. The two soaked in the perfectly glorious adulation from the crowd, though the revelries were cut short with their opponents’ arrival.

SAnitY revealed themselves as not just a tag team, but a squad of four hooded figures, stalking their way to the ring through a dark haze. The first two to reveal themselves were Sawyer Fulton and Alexander Wolfe, who would be representing their chaotic crew in the match. Fulton and Wolfe pounced on The Perfect 10 from the outset of the match, even letting their cohorts at ringside get a few shots in.

Dillinger, who wanted to win the classic in memory of Rhodes, his mentor, soon found himself on his own, as Roode ditched him when the four members of SAnitY stared him down. That spelled the end for the “Glorious 10,” as he fell victim to a devastating double team move that saw SAnitY through to the second round.

The punishment did not end there for Dillinger, as the other two members of SAnitY joined in on the attack. The smallest member of the group dove on Dillinger, raining down blows on The Perfect 10 before revealing herself to be Nikki Cross. The last, mysterious member of the crew pulled the furious Cross off Dillinger, before leveling The Perfect 10 with a wheelbarrow neckbreaker. The final member of SAnitY tore away his facemask to reveal Eric Young. In just a few short minutes, SAnitY may have turned the Dusty Rhodes Tag Team Classic, and NXT, upside down.

After being mocked by Billie Kay and Peyton Royce following her defeated at the hands of Asuka two weeks ago, Liv Morgan was out to get a measure of payback against the “Femme Fatale.”

The New Jersey native was aggressive from the opening bell, taking Kay to the canvas, but soon found herself at the mercy of the ruthless Australian. Kay took delight in torturing Morgan as the bout wore on, but the feisty New Jerseyan fought back. Perhaps seeing the writing on the wall for her friend, Royce tripped Morgan at ringside, giving Kay the opening to clobber Morgan with a big boot and pick up the victory.

The upstart team of newcomers Tino Sabbatelli & Riddick Moss were out to make their NXT debut a successful one, with a first round win in the Dusty Rhodes Tag Team Classic. However, the rookies had a tough draw in the tournament, squaring off against the experienced duo of TM-61.

The newcomers put on a good showing, using their size and strength to their advantage, bowling over Shane Thorne & Nick Miller. However, the Australian pair rebounded and put the self-proclaimed “real athletes” away, taking Sabbatelli to Thunder Valley and cementing their place in the second round of the Dusty Rhodes Tag Team Classic.

Former tag team partners and NXT Tag Team Champions Wesley Blake and Buddy Murphy took to the ring to settle the score. However, just as Murphy looked to be getting the upper hand with a huge dive over the ropes, Samoa Joe put an immediate end to their battle, demolishing both men in reckless fashion.

The submission specialist roared at NXT General Manager William Regal, letting him know the time to make a decision was up. “Bring me Nakamura or bring me my championship,” he growled, holding up the show in the process. Joe did not have to wait long for an answer, as Shinsuke Nakamura made his first appearance since being sent out on a stretcher by Joe.

Wearing a neck brace, the NXT Champion looked to still be feeling the effects of the attack that was supposed to have him out of action for six to 12 weeks. However, The King of Strong Style shocked his rival by ripping off the brace and charging toward the ring. The two warriors went after each other, trading vicious blows, only to be pulled apart by security. Nakamura punched, kicked and kneed his way through the security team, determined to get his hands on Joe.

Though Joe tried to sneak attack the NXT Champion, there was no stopping Nakamura. When the fight spilled back into the ring, Nakamura got the upper hand and drove his knee through Samoa Joe's face with the Kinshasa. The King of Strong Style let Samoa Joe know that though the submission specialist may have injured him, he didn't retire him, and he's ready to fight to keep his NXT Championship. 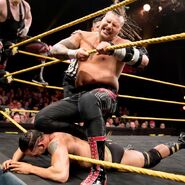 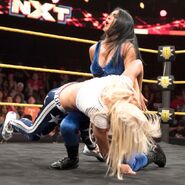 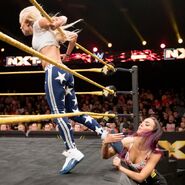 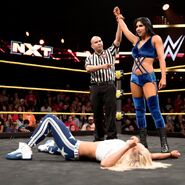 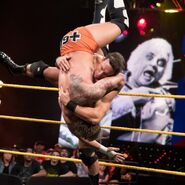 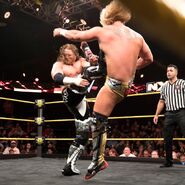