In the first-ever RAW from the United Kingdom, and a little more than a week before Taboo Tuesday, Superstars were campaigning WWE-style Monday in Manchester, England.

And the most serious politicking was done by the three contenders for Triple H's World Heavyweight Championship: Shawn Michaels, Chris Benoit and Edge.

In fact, the restless trio could barely get along during Monday's main event, which pitted Evolution against HBK, Benoit and Edge. Still, the combination of Sweet Chin Music from HBK and a Flying Headbutt from Benoit put Triple H down for the count.

But instead of congratulating each other for a job well done, all three Superstars took turns grabbing the microphone and making their cases for Taboo Tuesday.

And when HBK attempted to take a straw poll of the raucous MEN Arena crowd, Edge took exception, spearing the Showstopper and the Rabid Wolverine.

RAW General Manager Eric Bischoff couldn't help but notice the tension among the candidates. As a result, all three contenders got a chance complete their campaigns next week, squaring off in a Triple Threat Match in Chicago.

La Resistance also received some sobering news from Bischoff. After the World Tag Team Champions failed to inflict the type of punishment on Eugene that Bischoff wanted to see, the RAW boss made sure La Resistance would be busy at Taboo Tuesday.

In fact, the two Superstars not selected to face Triple H for the World Heavyweight Championship would team up to take on La Resistance. Of course, the three Superstars on that ballot are HBK, Edge and Chris Benoit, making the match quite a task for the champions, regardless of the voting outcome.

Earlier in the night, Batista made his case for a spot opposite Chris Jericho for the Intercontinental Championship. Batista came out and beat down Jericho after Y2J's tag match in Manchester. Batista was one of 15 different Superstars eligible to face Jericho.

It also wasn't a good night to be Val Venis. Moments after Kane saw Gene Snitsky give a taunting interview to Jim Ross from the WWE World Headquarters in Stamford, Conn., The Big Red Monster simply lost it.

Kane barged in on the tag match that was scheduled to begin and cleared house with a steel chair. Val Venis took the brunt of his unbridled anger, receiving about a dozen shots to the back while he was already down face first on the ramp. Val Venis would be hauled off on a stretcher minutes later.

You could wonder if Kane was giving the seemingly unshakable Snitsky a painful preview of what was to come during their Taboo Tuesday's Weapon of Choice Match.

Randy Orton and Ric Flair also had another confrontation before their match at Taboo Tuesday. Flair maintained that Orton wasn't a Legend Killer, while Orton simply announced that he hopes the Nature Boy would bring his best to Milwaukee.

England native William Regal also had quite a night as Regal and Eugene thought they won the World Tag Team Championship from La Resistance.

But Bischoff had other ideas, restarting the match, as La Resistance held on for dear life. 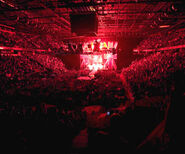 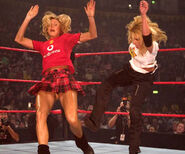 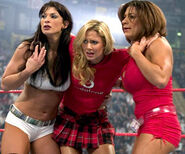 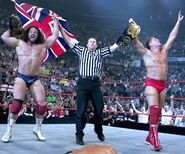 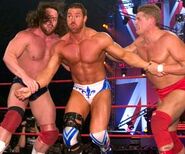 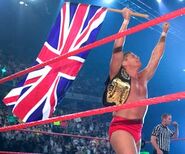 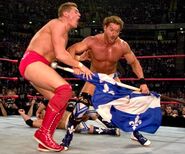 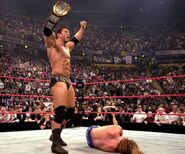 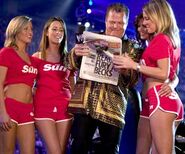 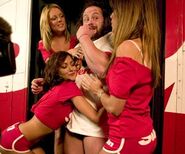 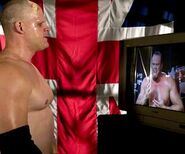 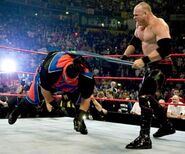 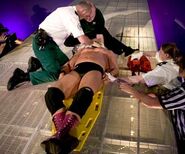 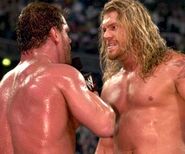 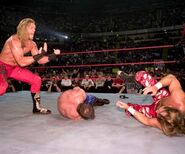 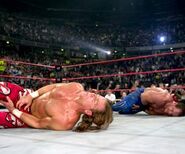 Retrieved from "https://prowrestling.fandom.com/wiki/October_11,_2004_Monday_Night_RAW_results?oldid=1563655"
Community content is available under CC-BY-SA unless otherwise noted.