SmackDown Tag Team Champions The Usos wanted to kick off SmackDown LIVE by reflecting on their title victory over The New Day in a barbaric Hell in a Cell Match this past Sunday, but you'll never guess who, who, WHO had something to add to the discussion. Yeah, The New Day.

However, Jimmy & Jey, seemingly sporting a new attitude after their incredible battle with Big E & Xavier Woods inside the structure that changes careers, appeared to be attempting to constitute a truce between the two squads ... an “Uce Truce” if you will. Claiming that The Usos and The New Day were the best two teams on Team Blue, they thought it was time to bury the hatchet.

Before the historic treaty could be reached, however, they were promptly interrupted by The Hype Bros, Chad Gable & Shelton Benjamin, Breezango and The Ascension, all looking for a chance to stake their claim to a SmackDown Tag Team Championship opportunity and prove they were better than the perceived best. Ask and you shall receive, as Team Blue General Manager Daniel Bryan arrived to announce they would all have the chance to be the next challengers for the titles, in a Fatal 4-Way Match ... next!

Following Daniel Bryan's announcement, Shelton Benjamin & Chad Gable, The Hype Bros, The Ascension and Breezango competed in a thrilling and dizzying Fatal 4-Way Match for the opportunity to be the next in line to face off against The Usos for the Team Blue Tag Titles.

The action was fast-moving and high-octane, but Benjamin and Gable weathered the insanity, dished out a plethora of punishing suplexes and spinebusters to anything that moved and claimed the major win after hitting an incredible double-team maneuver on Tyler Breeze to punch their ticket to dance with Jimmy & Jey.

After an all-out fracas erupted between the Team Blue ladies in the SmackDown LIVE women's locker room, Becky Lynch squared off against Ms. Money in the Bank, Carmella, who was of course accompanied by the leashed James Ellsworth.

Feisty as ever, The Princess of Staten Island brought the fight to The Irish Lass Kicker, but it wasn't enough to extinguish her opponent's straight fire, as Becky suddenly trapped Carmella in the Dis-arm-her to score the submission victory.

After Sami Zayn dealt a shocking assist to Kevin Owens at WWE Hell in a Cell that allowed his bitter rival to defeat Shane McMahon near the wreckage of the announce table during a barbaric Falls Count Anywhere Hell in a Cell Match, the victorious Kevin Owens welcomed his “best friend” and “guardian angel” out in front of the WWE Universe on SmackDown LIVE.

Zayn, seemingly as joyous as ever, delivered a passionate address to the WWE Universe, stating that KO helped him see the light when he Powerbombed him on the apron two weeks ago on Team Blue. Zayn acknowledged his tumultuous past with KO, but admitted to seeing that Owens was right when he suggested that Zayn was going about his career the wrong way. Zayn noted that he saved KO from impending doom because of Owens’ stern words to Zayn combined with Shane-O-Mac's clear intentions to badly injure Owens this past Sunday.

Zayn thanked Owens for showing him the light, then the two embraced several times over, sung each other's praises, embraced some more ... just like best friends do.

After losing to Randy Orton at WWE Hell in a Cell, Rusev came in to SmackDown LIVE with something to prove, and The Bulgarian Brute teamed with Aiden English to take on The Viper and Shinsuke Nakamura in a star-studded tag bout.

For a while, it appeared that Tuesday was Rusev Day, as The Bulgarian Brute and The Mozart of Mayhem took firm control by wearing down Orton and Nakamura. Yet, their efforts were not enough, as Orton emphatically wiped out The Bulgarian Brute with an RKO outta nowhere, and Nakamura wrecked English with a pinpoint Kinshasa to claim a big win for The Apex Predator and WWE's Rockstar.

Bobby Roode got the leg up on Dolph Ziggler competition-wise at WWE Hell in a Cell when he defeated The Showoff in their one-on-one contest, but Ziggler got the last laugh when he immediately dropped Roode with the Zig Zag after the defeat.

The Glorious One, itching to pound on Ziggler some more after the blindside attack, was in the ring ready for a fight. Ziggler made his way onto the stage, chastised Roode, showed a picture of The Glorious One grabbing The Showoff's tights in their match at WWE Hell in a Cell and called him a “fraud” and a “cheater” while making it clear that he wanted a rematch. Always one for a good mind game, however, Ziggler revealed that there would indeed be a rematch ... but not tonight.

However, it was announced that the two would square off next week on SmackDown LIVE.

Baron Corbin won the United States Title at WWE Hell in a Cell in a Triple Threat Match without pinning the champion ... and naturally this was a tough pill to swallow for the former titleholder, AJ Styles. Styles was so fired up that he immediately exercised his rematch clause, setting in motion a major main event matchup on SmackDown LIVE.

The Phenomenal One and The Lone Wolf threw down for the star-spangled championship, creating some highlight reel moments, including Styles sending Corbin soaring across the announcer's desk with a dynamic dropkick. In the heat of the action, Styles leapt off the ring apron at Corbin, who countered by viciously throwing Styles shoulder-first onto the ground. This made Styles far worse for wear, allowing Corbin to get his nemesis back into the ring and finish him off with the punishing End of Days for the victory. 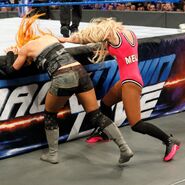 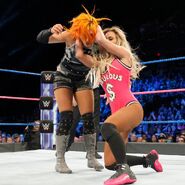 Retrieved from "https://prowrestling.fandom.com/wiki/October_10,_2017_Smackdown_results?oldid=1563653"
Community content is available under CC-BY-SA unless otherwise noted.