The October 10, 2011 Edition of RAW is a Professional wrestling television show of the WWE's RAW brand, which took place on October 10, 2011 at Chesapeake Energy Arena in Oklahoma City, Oklahoma.

Defiant in the face of the chaos that has taken over the Raw SuperShow, Triple H vowed that he would not step down as WWE COO and that the night's event would continue as planned in spite of the Superstar “Solidarity Rally” that was taking place in the parking lot of Oklahoma City's Chesapeake Energy Arena. The Game was not alone, though. Soon joined by John Cena, Sheamus and CM Punk, Triple H and this group of Superstars made it clear that they believe in sports-entertainment's oldest adage — the show must go on.

Determined to put on a show, Cena and Sheamus locked up in the ring while Triple H officiated and Punk handled commentary. It was an entertaining, makeshift match that was soon interrupted by an unexpected presence — Mr. McMahon. Calling an end to the bout, the intimidating magnate addressed his son-in-law directly, telling Triple H that he liked his style, but the WWE Board of Directors has labeled him as a possible financial catastrophe and has relieved him of his duties on Raw. Furthermore, the Board declared that no member of the McMahon family could run the Raw SuperShow due to a conflict of interest, leading Mr. McMahon to announce a new Interim General Manager of Raw — WWE Executive Vice President of Talent Relations John Laurinaitis.

Immediately stepping into his new role, Mr. Laurinaitis welcomed the embattled Superstars back into the arena and sent Christian and John Morrison directly to the ring in their street clothes. Already unhappy with the new General Manager, Captain Charisma took his anger out on The Shaman of Sexy, beating JoMo and then encouraging Cody Rhodes, Jack Swagger and Dolph Ziggler to smash the fallen competitor.

This bout was just the beginning of the Laurinatis-led Raw Supershow. In short order, the GM scheduled two main events for the night — World Heavyweight Champion Mark Henry vs. Randy Orton and WWE Champion Alberto Del Rio vs. CM Punk.

Less than two weeks before he faces Big Show at Vengeance, Mark Henry clashed with Randy Orton and came very close to falling to WWE's Apex Predator. After getting nailed with a devastating RKO, The World's Strongest Man was down for the count before a malicious Cody Rhodes attacked Orton for the second time in the bout. The Intercontinental Champion and Mark Henry brutalized the vulnerable Viper before Rhodes sent a humiliating message of contempt to his former mentor by putting a paper bag on his head.

Still fired up following her brutal beat down of Beth Phoenix on last Monday's Raw, Kelly Kelly came to fight with her good friend Eve by her side. Tempering the blonde beauty's aggressiveness with her ring smarts, Eve capitalized on the punishment Kelly dished out by pinning Tamina for the win. Somewhere in the locker room, Beth & Natalya were watching this match very closely.

Less than an hour into his tenure as Interim Raw General Manager, John Laurinaitis dropped two bombshells. First, he announced that WWE Champion Alberto Del Rio will defend his title against John Cena at Vengeance. Then, in a move that shocked the WWE Universe, Mr. Laurinaitis beckoned Jim Ross into the ring and called the WWE Hall of Famer an ingrate for walking out on Triple H last week. The EVP of Talent Relations then fired the legendary announcer.

Two weeks after he returned to the ring and smashed both Jack Swagger & United States Champion Dolph Ziggler, the massive Mason Ryan joined forces with the WWE Tag Team Champions to do it again. Throwing his considerable weight around, the powerhouse from Wales stomped through his three opponents before planting the United States Champion into the canvas. It's clear this big man means business.

What started off as a showdown between the WWE Champion and The Straight Edge Superstar soon exploded into tag team warfare when Interim Raw General Manager John Laurinaitis reinstated the controversial duo of Miz & Truth and set this match on the spot. Quickly abandoned by his spineless partner, Punk was forced to go it alone against his devious opponents. But when The Awesome Truth began to double-team The Voice of the Voiceless, The Game rushed to the ring to defend his former rival in a show of solidarity the WWE Universe could actually get behind.

Following the match, the Interim Raw General Manager proposed yet another idea to bring to the Board — a bout pitting CM Punk & Triple H against The Miz & R-Truth at Vengeance. 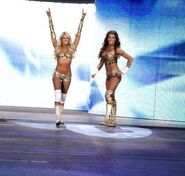 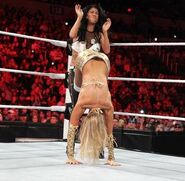 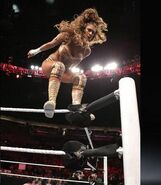 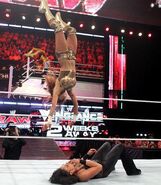 Retrieved from "https://prowrestling.fandom.com/wiki/October_10,_2011_Monday_Night_RAW_results?oldid=1563649"
Community content is available under CC-BY-SA unless otherwise noted.