November 16, 2016
The November 9, 2016 Edition of NXT is a Professional wrestling television show of the WWE, which took place at the Full Sail University in Winter Park, Florida on October 13, 2016.

LOS ANGELES — It may have seemed like Johnny Gargano & Tommaso Ciampa were the fresher team in this battle, having advanced to the semifinals as a result of The Revival's forfeit. However, any advantage #DIY may have had was negated by the brute force of The Authors of Pain.

Akam started off strong, leading #DIY to lean heavily on their speed and agility to stagger their monstrous foes. But Akam & Rezar found a way to stop that, too, catching a diving Gargano, then hurling Johnny Wrestling into Ciampa when he took flight. The Authors’ manager, Paul Ellering, even joined in on the beatdown, slamming Gargano face-first into the ring apron while the referee was distracted.

But through it all, Gargano remained resilient, fighting back against his towering opponents and tagging in his partner. Ciampa stunned Rezar with a series of devastating strikes and showed off incredible strength, planting the 330-pounder into the mat with a German Suplex. Rezar countered with a show of strength of his own, lifting up both members of #DIY and hurling them overhead with a devastating slam.

DIY took flight, neutralizing Rezar at ringside and clobbering Akam back in the ring with their devastating running knee/superkick combo. Gargano & Ciampa had Akam down for the three-count, but Ellering jumped onto the apron and distracted the official, preventing him from counting the pin. With the referee's attention elsewhere, The Revival emerged from under the ring. Scott Dawson planted Gargano head-first into the floor of the Hollywood Palladium with a DDT, leaving Ciampa alone in the ring to feel the full effect of the Last Chapter, as the Authors reserved their spot in the Dusty Rhodes Tag Team Classic Finals.

Shane Thorne & Nick Miller had a tall task ahead of them in the semifinals of the Dusty Classic, in the form of the maniacal SAnitY. The chaotic crew wasted no time in ambushing TM61, as all four members of SAnitY attacked, knocking Thorne off the top rope and sending him crashing to the arena floor and launching Miller into the unforgiving steel ring steps.

When the anarchy settled, Thorne was the first back to his feet and started the match on his own, having to fight off not only Sawyer Fulton and Alexander Wolfe, the legal participants of the match, but also Eric Young and Nikki Cross at ringside. After enduring a tremendous beating, Thorne was able to send Wolfe and Fulton colliding into each other and tag in Miller. The fresh member of TM61 went right after SAnitY. Though Wolfe & Fulton managed to gang up on Miller and set him up for their double-team finishing move, Thorne dropkicked Fulton out of the ring, allowing Miller to roll up Wolfe and get the three-count!

With their victory, TM61 have advanced to the tournament finals at NXT TakeOver: Toronto. It may be wise for them to rest up and recover from SAnitY's assault from now until next Saturday, as they will have to withstand the bruising power of The Authors of Pain if they want to leave Canada with the Dusty Rhodes Tag Team Classic Cup.

ORLANDO, Fla. — Back in the Sunshine State at Full Sail University, Ember Moon continued her ascent toward the top of the NXT Women's division. Rachael Evers set out to put an end to Ember's success, but was eclipsed by Moon, falling victim to Ember's devastating diving stunner off the top rope. Though it will be Asuka and Mickie James clashing for the NXT Women's Championship at TakeOver: Toronto, the Superstar who leaves Canada as champion should be keeping a close eye on Moon.

NXT General Manager William Regal knew that the contract signing between NXT Champion Shinsuke Nakamura and Samoa Joe was going to be intense, but he couldn't have imagined it going down like this.

The King of Strong Style joined Regal and a fleet of security guards in the ring for the proceedings, but they were not joined by Joe. The submission specialist started to approach the squared circle, but instead walked back through the curtain and returned, dragging a table to the top of the stage, where he would sign his name on the contract.

After taunting the NXT Champion, Joe demanded that Regal bring the contract to him. Regal relented, reluctantly walking up the ramp to get the disrespectful challenger's signature. Back in the ring, Nakamura found himself surrounded by six security guards as he stepped toward Joe. The King of Strong Style dropped the contract on the canvas and battered all six guards in quick fashion, putting the last one through the table with a vicious powerbomb. Having sent a clear message to Samoa Joe, Nakamura then put his name on the dotted line, setting the stage for what promises to be one of the most brutal bouts in NXT history. 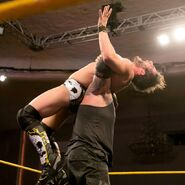 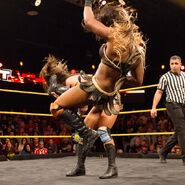 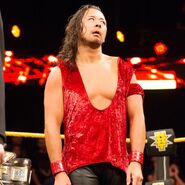 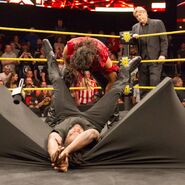 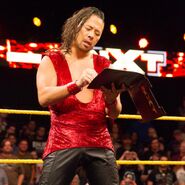