November 16, 2010
The 'November 9, 2010' Edition of NXT is a Professional wrestling television show of the WWE, which took place at the Manchester Evening News Arena in Manchester, England, UK.

Tonight's WWE NXT episode following last week's elimination of Maxine opened with a video package on the Goldsana wedding with the reveal that Aksana conned Goldust into marriage in exchange for immunity from deportation. After a full pyro blast, Michael Cole sarcastically introduced NXT. "Yep, it's that time of the week," Cole said. He sent it to Matt Striker in the ring. Before he could introduce the NXT Rookies, Goldust's music interrupted. Goldust stomped out to the ring with a purpose and took the mic from Striker to call out Aksana. Alls he wants is an explanation. He told Aksana to hurry on out to the ring...right now. The crowd oohed a bit. No sign of his wife.

After a pause, Aksana walked out with the Million Dollar Title belt over her shoulder. Aksana said Goldust sure helped her, as they got married and her immigration problems are now over. Now, she has her green card and she can stay in the U.S. Goldust made it clear it's all about her. And she wants the Million Dollar Title belt, right? Aksana laughed and said when they get divorced; she will get to keep half of the value of the title. She said it's the American way. Goldust cut off a "U-S-A" chant and told Aksana she's a witch and they're not even in the U.S.

Goldust suggested they kick Aksana out of the U.K., but Naomi interrupted. Naomi accused Aksana of trying to play the sweet, innocent European immigrant, but she could see through all of it from the beginning. Naomi accused Aksana of trying to get all of the attention on NXT, but she has her attention now and she wants a match tonight. Aksana suddenly turned to Goldust, her Pro, for advice. Goldust told "wife" that, speaking as her Pro, she should...get in the ring to get her butt kicked by Naomi. The crowd popped and Aksana did her "Whaaaaat?" line. Cue up Goldust's music and Cole offered his dry sarcasm on this being a Match of the Year candidate.

Striker was in the ring with the four remaining Rookies: A.J., Aksana, Kaitlyn (playing the Ashley Massaro role wearing a baseball cap), and Naomi. Striker reminded them there are only three more weeks of NXT remaining. "Thank God," Cole said. Striker said there will be another elimination next week and the slate will be wiped clean on the Immunity Standings after last week's elimination. Striker introduced an arm wrestling tournament to determine who gets an Immunity point this week. Cole did mock snoring on commentary.

Contest #1: A.J. vs. Aksana. Mathews checked on Cole, who was asleep. Aksana won the first match-up, sending A.J. to the back. They cut to a shot of Cole slumped down in his chair selling he's asleep. Mathews said it's been a long tour for Cole.

Contest #2: Kaitlyn vs. Naomi. Kaitlyn turned her cap around and won the contest. She then screamed at Cole to wake up, but no dice.

Before the match, they recapped Nikki's aggressive side recently coming out. The announcers recapped the switcheroo gimmick coming out on Raw last night, but without the recent animosity seen on NXT. Cole continued to talk and there was an awkward pause as Cole waited for Mathews to say something. Cole surmised Mathews was "being produced" with lines being fed to him. Mathews laughed and said he received a text. They brought up the Old-School Raw on Monday and Cole said he hopes "Vince" returns to commentary on Monday.

In the ring, Nikki dominated the proceedings before dropping A.J. on her head. "You okay, Rookie?!" Nikki barked at A.J. suddenly, a message came over the PA system that a virus has been updated on the system. Cole said even the PA announcer is bored. Mathews said maybe the Raw GM is trying to tell Cole to go home. Not the match, but actually leaving. On the outside, the Bellas teased the Switcheroo (and possibly executed it), but Primo acted like he caught onto their game. "Why do you need to get involved, you freakin' idiot?" Nikki (or Brie acting like Nikki) shouted at Primo. A.J. then rolled up Bella and scored a three count for the win.

"Stand Up for WWE" video: The wrestlers and Divas laughed, giggled, smiled, and had a joyous time talking about WWE being like a family in sit-down interviews. They included the Nexus members, who were previously trying to tear down WWE from its foundation, talking out-of-character about how unbelievably grateful they are to be part of WWE. Joey Styles had an on-camera cameo. They showed a backstage clip of Jerry Brisco showing JTG how to work an armbar. Matt Striker said he lost his dad two years ago and he wouldn't have been able to get through it without WWE. Vickie Guerrero, whose husband died while trying to keep up with the "family-friendly" WWE schedule, said she got through Eddie's loss with her WWE family.

Cole and Mathews were shown on-camera. Cole said they try to have a lot of fun here on NXT, and that's "the beauty of WWE" getting to have a ball of fun being part of the "WWE family."

A.J. won the first on Eve straight from Los Angeles. Jack Swagger was next, which A.J. scored. Cole joked some of the wrestlers are straight out of high school. John Cena sporting Syracuse University gear was next, which Naomi scored. Mathews: "And John said he would never be on NXT." Kaitlyn then scored the next one.

Next was a black-and-white photo of someone who looked dashingly similar to Cody Rhodes. It turned out to be Jerry Lawler. Kaitlyn then scored Mark Henry and A.J. and Kaitlyn ended up tied. The tiebreaker was John Morrison, which A.J. won while brawling with Kaitlyn over control of the buzz-in horn. Cole slipped and said that was the "funnest" part of the show.

They aired a new trailer promoting today's Knucklehead DVD release. Big Show told us this movie will "touch your heart." Cue up the potty jokes and Big Show crashing into things. They included sit-down interview clips of the other notable actors talking up Show willingly playing a big doofus character.

Cole thanked "Mad Dog" for a lot of fun. Mathews said it's "Black Dog." Cole just moved on to plugging the Survivor Series PPV line-up with all of three matches announced with one week of TV remaining. Cole said Cena's entire future will be on the line at Survivor Series. Mathews then fed to a video from last week when Dolph Ziggler and Kaitlyn were caught making out in a trunk backstage. Cue up Vickie Guerrero getting the cake in the face. This was followed by video highlights from Smackdown when Vickie scored a tainted victory over Kaitlyn.

Vickie interrupted Kaitlyn talking to a stagehand. She told Kaitlyn she's better than her. Vickie said Kaitlyn isn't even worthy to be her Rookie. Dolph is even done with Kaitlyn. Kaitlyn came back with a rear end joke, which prompted a slap from Vickie. Kaitlyn threw Vickie into a trunk, but Vickie came back by throwing Kaitlyn into a catering table.

Kelly Kelly led Naomi to the ring as Cole sarcastically noted this heated rivalry between Naomi and Aksana is a whole 45 minutes old. "Big fight feel!" Mathews shouted. Cole said the fans are on their feet. Cole has finally tipped his hand...this whole show is mocking TNA Impact's rushed booking.

Aksana came out alone without her Pro husband, Goldust. Before the opening bell, Goldust's music hit to bring out Goldust with his chest puffed out and a crazed look in his eyes toward Aksana. The match started and Aksana bailed out of the ring. Cole brought up the dancing contest "like 12 weeks ago" and said he's like one of the Pros on "Dancing With The Stars." Cole used a pronoun, which drew a comment from Mathews under his breath. Mathews then spoke as if he's Cole that he goes into the locker room and backs off his negative comments during the show because he's "a character now and he's told what to say." Cole said he's saying what's on his mind before telling Mathews he must think he's the second coming of J.R. after broadcasting one episode of Raw. Mathews and Cole continued to debate who's produced more as Aksana took control of the action.

Naomi made a comeback at 5:00 and landed rolling elbow strikes to the chin for a two count. Aksana came back with a "vintage Goldust" drop-down slap below the chin. Mathews took a dig at Ross, saying Survivor Series can't get here soon enough because they need another announcer seminar. Naomi then scored the pin on Aksana for the win. Cole screamed at Goldust to do his husbandly duty and help Aksana.

NXT next week: another elimination. Cole said he's intrigued by "this whole Goldust thing." Goldust was shown staring down at Aksana like a father catching his daughter after she spilled milk all over the floor. 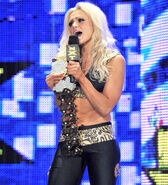 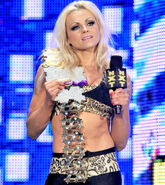 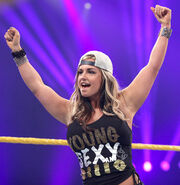 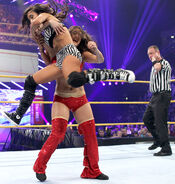 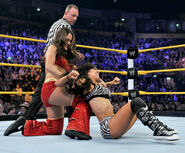 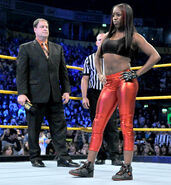 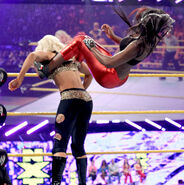