Proving the global power of WWE, thousands of WWE fans packed Liverpool's Echo Arena tonight to witness the return of Kevin Nash, the uncovering of Kelly Kelly and the menace of The “Awesome Truth.”

Confronted by The Miz & R-Truth in front of a passionate crowd in Liverpool's Echo Arena, John Cena was unfazed by the arrogant duo's insults. Instead, the Cenation leader simply told his Survivor Series opponents to prepare for the beating they were going to receive in the night's main event at the hands of Cena and his tag partner — Zack Ryder.

It looks like JoMo got his mojo back. Mere days after WWE.com ran a story about John Morrison's recent ring woes, The Shaman of Sexy snapped out of his losing streak by grabbing an impressive victory over United States Champion Dolph Ziggler.

Still fired up after being brutalized by CM Punk last Monday night, WWE Champion Alberto Del Rio took his anger out on Kofi Kingston, destroying him with blistering strikes before submitting one-half of the WWE Tag Team Champions with the cross armbreaker. Not content to stop there, The Mexican Aristocrat continued to apply the devastating maneuver before The Straight Edge Superstar stopped the carnage. Now face-to-face with his Survivor Series opponent, Del Rio told Punk to cancel their WWE Title Match — or he would force him to. Clearly not intimidated, The “Voice of the Voiceless” refused and came to blows with his rival before locking him in the Anaconda Vise. Of course, it was Ricardo Rodriguez who got the worst of it as Del Rio sacrificed his personal ring announcer to the GTS so he could flee the ring.

Enraged after losing to Santino Marella last week thanks to some outside involvement from The Muppets, Jack Swagger developed a twitch in his right eye — and a serious mean streak. Attacking his opponent with unnerving aggression, The All-American American tore the Italian Superstar apart before nearly ripping his foot off with a wrenching ankle lock.

Kelly Kelly shouldn't have been surprised. Moments away from revealing her Maxim magazine cover to the WWE Universe, the beautiful Diva was interrupted by Divas Champion Beth Phoenix and Natalya, who once again insulted the gorgeous competitor and her modeling background. But before the “Sisters of Salvation” could attack Kelly, the menacing Divas were chased off by Eve and Alicia Fox, allowing the former Divas Champion to show off her stunning cover with no disruptions.

Reintroduced to WWE by Interim Raw General Manager John Laurinaitis, a livid Kevin Nash laid out the reasons why he put his longtime friend Triple H in the hospital. Following his return to WWE at the 2010 Royal Rumble, the big man attempted to reform “The Kliq” with the WWE COO, but was denied. Big Sexy refused to take “no” for an answer, though, and chose to make a statement by attacking the biggest dog in the yard. In Nash's words, THAT is how you play The Game.

Two weeks before he teams with The Rock to face The “Awesome Truth” at Survivor Series, John Cena joined forces with The Long Island Iced-Z to face The Miz & R-Truth and quickly found out he'll have some serious competition come Nov. 20. Despite working well as a duo, the Cenation leader and the internet sensation found themselves on the losing end of things when Truth held down Cena's legs, allowing The “Awesome One” to score the win. Expect the same kind of dirty tricks to go down in Madison Square Garden. 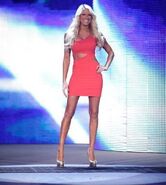 Retrieved from "https://prowrestling.fandom.com/wiki/November_7,_2011_Monday_Night_RAW_results?oldid=1563597"
Community content is available under CC-BY-SA unless otherwise noted.