The November 4, 2011 Edition of Smackdown is a Professional wrestling television show of the WWE's Smackdown brand, which took place on November 1, 2011 at the Bi-Lo Center in Greenville, South Carolina.

In an anything goes Street Fight, The Viper and Intercontinental Champion Cody Rhodes clashed in a knockdown, drag out battle. In a particularly brutal moment, The Viper suplexed Rhodes onto a steel grate on the entrance ramp. Despite the crushing blow, Rhodes carried on.

With The Viper locked in a painful leg hold, Rhodes removed his mask and used it as a weapon to bash Orton in the skull. But as the battle continued and Rhodes tried a similar move, the cunning Viper grabbed the mask and smashed Rhodes in the face with it. That proved to be a pivotal turning point in the match, shifting momentum in The Viper's favor.

Finally after an RKO from the ring barricade to the arena floor, then another one in the ring, WWE's Apex Predator secured the win. Adding insult to injury, Orton placed one of Rhodes’ paper bags over his head. Then as he walked up the ramp in victory, Orton held Rhodes' mask up to reveal it had been cracked.

In a competitive bout between two young Superstars looking for a win, Ted DiBiase reigned supreme when he put away Tyson Kidd with Dream Street.

When Mark Henry didn't like the way Daniel Bryan was looking at him, he dared Mr. Money in the Bank to meet him in a match. When the Bryan didn't back down, the ball was set in motion for the night's main event.

When debating who was entitled to a World Title Match, Christian grew nervous that Big Show was going to knock him out. After stating he would do no such thing, Big Show brutally chokeslammed Edge's lifelong buddy.

With Christian unable to face Sheamus due to a massive chokeslam from Big Show, Wade Barrett suggested he take Christian's place. When Sheamus agreed, it was on. But when Christian finally recovered, he decided to get involved. His distraction opened the door for Barrett to cunningly wrap up Sheamus for the pinfall – yet another victory for his “Barrett Barrage.” Seething with anger, Sheamus wanted more of Barrett, but was met with a spear from Christian. With The Celtic Warrior down, Christian raised Barrett's arm in victory as the duo walked up the ramp.

Up against an unknown Superstar in Epico, Sin Cara was looking good until Hunico intervened, pushing Sin Cara off the top rope. With the bout over due to disqualification and Sin Cara down, both Hunico and Epico launched a brutal 2-on-1 beat down on the vulnerable masked Superstar.

Even with Big Show in his corner, Daniel Bryan faced a formidable challenge in Mark Henry. But before a winner could be determined, Big Show inserted himself into the action, knocking out the champion with a vicious punch from behind. With the bout over due to disqualification – and Henry still down on the canvas – Show urged Bryan to cash in his Money in the Bank contract.

But Henry wasn't going to let things go down like that.

With both Superstars still reeling from the huge impact, SmackDown General Manager Theodore Long emerged to announce their rivalry would be settled in a match at Survivor Series. The news brought a huge smile to The World's Largest Athlete. 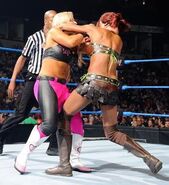 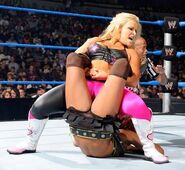 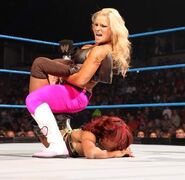 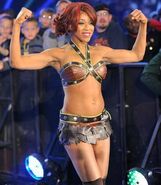 Retrieved from "https://prowrestling.fandom.com/wiki/November_4,_2011_Smackdown_results?oldid=1563581"
Community content is available under CC-BY-SA unless otherwise noted.