December 7, 2016
The November 30, 2016 Edition of NXT is a Professional wrestling television show of the WWE, which took place at the Canadian Tire Centre in Ottawa, Ontario, Canada on November 22, 2016.

After taking over Toronto last week, NXT made its way to the Canadian capital of Ottawa, kicking off in hard-hitting fashion with Asuka in action. The undefeated Empress of Tomorrow was riding high after her victory over the legendary Mickie James and looked supremely confident as she took on Nicole Matthews.

While Matthews went right after the NXT Women's Champion, Asuka was ruthless in her attack, kicking her into the canvas with no mercy before picking up the victory with the Asuka Lock. Later, in an interview with Dasha Fuentes, The Empress of Tomorrow declared that she wants competition. “But, I’m afraid there isn’t any left,” she said. Is there anyone who can step up to the challenge of Asuka?

After challenging Eric Young to a fight last week and feeling the brutality of all four SAnitY members, No Way Jose was hoping for a fair fight with the leader of the chaotic crew. Jose was fired up from the opening bell, going right after Young, forcing him to retreat to the arena floor.

However, the numbers game was too much for Jose to overcome. Alexander Wolfe helped the maniacal Young turn the tables with a timely distraction. And when Jose looked to be rallying back, Wolfe, Sawyer Fulton and Nikki Cross jumped on the apron. This distraction gave Young the opening he needed to connect with a devastating wheelbarrow neckbreaker and get the three-count. But the attack didn't end there, as the crazed Cross rushed back to the ring and clobbered Jose with a top-rope dropkick.

In the aftermath of his loss to Bobby Roode at TakeOver: Toronto, Tye Dillinger set out to prove that he belongs in NXT. After Samoa Joe laughed off his initial challenge, The Perfect 10 shocked the NXT Champion with a slap across the face, leading NXT General Manager William Regal to set up this main event.

A furious Joe went right after Dillinger, but the raucous Ottawa crowd rallied behind their fellow Canadian. The NXT Champion overpowered The Perfect 10 and took control of the match, wrenching Dillinger's knee with brutal submissions before pummeling him into the corner. Dillinger recovered and fought back, sending Samoa Joe reeling. However, The Perfect 10 could not put Samoa Joe away, increasing his frustration by the minute. Dillinger had Joe up for the Tye-Breaker, but Joe escaped and planted The Perfect 10 into the canvas with a powerbomb, then locked on the Coquina Clutch, forcing Dillinger to pass out.

Before the match, Dillinger said that if he couldn't win this match, then maybe he didn't belong in NXT. A dejected Dillinger certainly seemed to be mulling over those words as he left the ring. What does the future hold for The Perfect 10?

For Samoa Joe, the future is clear. The NXT Champion is supremely confident as he heads to Osaka, Japan, this Saturday to defend his title against Shinsuke Nakamura in a rematch from TakeOver: Toronto. 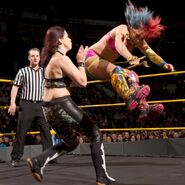 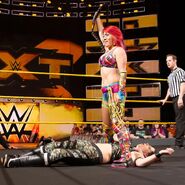 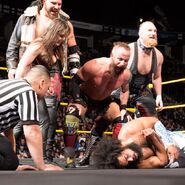 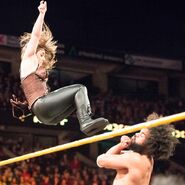 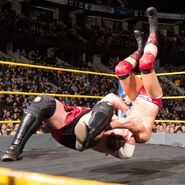