Now that he's back in WWE, admitted “Christmas fanatic” Mick Foley wasted no time spreading his unique brand of cheer on a special live holiday edition of SmackDown. Kicking off the night, “Saint Mick” announced a Miracle on 34th Street Fight and an All I Want for Christmas 20-Man Battle Royal – where the winner would get his special wish granted by Santa.

Of course, Saint Mick brought his favorite reindeer with him – “Rudolph” (Michael Cole), plus one of his elves (Josh Mathews), and “Booker Clause,” who did a Spin-a-Roonie for the WWE Universe.

Crashing the party, Intercontinental Champion Cody Rhodes emerged to talk trash to Booker T. In response, Saint Mick announced a match between Rhodes and Booker for later in the night. But to start things off, "St. Mick" announced a Divas Match.

With visions of sugar plums dancing in their heads, a ring full of Divas competed for a special prize they could cash in between now and Christmas. When Brie Bella prevailed she may have thought she won an opportunity for a Divas Title Match. But to her dismay, she found out from Foley what she really won – the opportunity to give a kiss to the Superstar of her choice between now and Christmas.

After playing Grinch and disparaging the holiday season in America, Jinder Mahal got what was coming to him against Justin Gabriel. When Ted DiBiase came to ringside dressed as Santa and handed out gifts to the WWE Universe, Mahal was clearly flustered. Seizing the moment, Gabriel attacked and finished off Mahal with a hard-hitting 450 Splash.

To celebrate the big night, SmackDown hosted a holiday party with such luminaries as WWE Hall of Famers “Rowdy” Roddy Piper and Dusty Rhodes. Goldust was even in attendance. But when David Otunga tried to shut down the party citing the legal concerns about the rights to the party music being played, “Saint Mick” announced Otunga would compete against Randy Orton in the night's Miracle on 34th Street Fight.

While talking to Matt Striker, Booker T was viciously attacked from behind by Cody Rhodes from and left writhing on the floor in pain. He was evaluated by medical personnel after the assault. Because of his condition, the scheduled match between Booker and Rhodes was canceled.

In complete control throughout the match, Randy Orton tossed David Otunga into various festive decorations in the arena. After a brutal DDT off the ring apron, it looked like it was game over for Otunga. But there was a glimmer of hope when Wade Barrett ambushed Orton. After downing The Viper, the brash Brit tossed Otunga back in the ring and walked away, thinking he set him up for the win. But WWE's Apex Predator battled back, finishing off Otunga with an RKO.

With the chance to seize a huge opportunity, 20 Superstars battled it out in an over-the-top war. Darren Young was the first to have his dreams shattered. After additional Superstars had their holiday wishes vanish, Heath Slater, Hunico, Tyler Reks and Jinder Mahal found themselves in the ring with ... Hornswoggle. As the larger Superstars taunted the diminutive competitor, Sheamus, charged into the ring to clear house.

When it came down to Sheamus and Hornswoggle, The Celtic Warrior did his best to shake his opponent to the floor, as he clung onto the ropes for dear life. When the two stood on the apron, Sheamus gave Swoggle a final chance to step down to the floor, but he stood his ground. In a swift and crafty move, the smallest Superstar shoved Sheamus to the floor to claim a stunning victory. After the match, instead of pummeling Hornswoggle, Sheamus helped him rejoice in his victory.

After winning the All I Want for Christmas Battle Royal, Hornswoggle asked Santa for the ability to talk. Upon realizing his wish had magically come true, he declared: “Thank you Santa, I’m talking!” The jubilant Superstar then excitedly greeted all of the attendees at the SmackDown holiday party.

With an injured ankle, World Heavyweight Champion Mark Henry forged his way through a match with Daniel Bryan. Despite a painful LeBell Lock and ankle lock, Bryan could not break Henry's will. And just when it looked like Bryan was going to climb out of the cage on two occasions, Henry managed to pull him back within the steel. In the end, a brutal World's Strongest Slam from the second rope crushed Bryan – and his dream of becoming World Heavyweight Champion. Now, Henry has his sights set on facing Big Show at WWE TLC on Dec. 18. 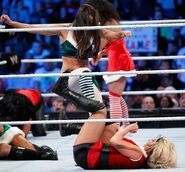 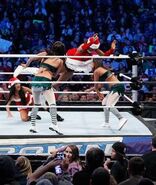 Retrieved from "https://prowrestling.fandom.com/wiki/November_29,_2011_Smackdown_results?oldid=1593785"
Community content is available under CC-BY-SA unless otherwise noted.