With the stakes still sky-high, the RAW roster butted heads. Viscera was the first victim of the battle royal as several Superstars targeted the behemoth. It wasn't long before Gene Snitsky made his presence felt as he recorded three straight eliminations. Chris Jericho and Shelton Benjamin would also go on to dump three Superstars, but it was Batista who put up the biggest numbers, recording seven eliminations, including fellow Evolution member Ric Flair. The final four came down to Jericho, Chris Benoit, Edge and Batista. Four was quickly whittled down to two as Benoit and Edge found themselves fighting tooth and nail on the apron outside the ropes. Losing their balance, both Superstars fell to the floor with their feet simultaneously hitting the floor. Both referees chose a different Superstar as the winner causing a controversy

But the controversy only grew later in the evening. General Manager Randy Orton ruled that both Edge and Benoit would face Triple H in a Triple Threat Match for the World Heavyweight Championship. After all, with two opponents facing Triple H, the odds of The Game retaining were less, and therefore, the odds of Orton getting a shot at the title would be increased.

Early on in the match, Benoit was able to slap on the Crippler Crossface on The Game, but Flair and Batista ran down to make the save. Orton then sent the Evolution members to the back and barred them from ringside. Later in the match, Benoit trapped Edge in the Sharpshooter while Triple H was on the outside. The Game regained his bearings, knocked out Orton on the outside, and broke up the hold. The referee also wound up getting knocked out of commission, allowing Orton to nail The Game with a steel chair. Benoit seized the opportunity and slapped on the Crossface on Edge. Edge managed to roll Benoit over, while the Crossface was still locked in, causing Benoit's shoulders to touch the mat. The ref began to count and as he counted three, Edge tapped out at the same time.

Just like in the battle royal, both referees could not agree on who the winner was. Edge and Benoit both felt they deserved the title, but as RAW went off the air, a clear winner was not decided.

Earlier in the evening Lita teamed up with Victoria to take on Women's Champion Trish Stratus and Molly Holly. After Molly broke up a rear naked choke that Lita had on Trish. Lita threw Molly out of the ring and nailed Trish with a kick to her broken nose and a DDT for the pinfall. Next week's General Manager Chris Jericho appeared later in the show and informed Stratus that she would be putting the title on the line against her nemesis Lita in one week.

William Regal and Eugene also put their World Tag Team Championships on the line against former champions La Resistance. In the end Eugene hit a Stunner to gain the victory. While Eugene was dancing in the ring, celebrating with some of his fans, a bitter Maven ran down and attacked the co-champion. Eugene had eliminated Maven from the battle royal earlier in the night, so Maven got his revenge when he smashed Eugene face-first into the steel steps.

Elsewhere Ric Flair and Jerry "The King" Lawler met in a Legend vs Legend match, which Flair won. And Randy Orton hosted the first-ever RAW Lingerie Fashion Show. The sights from this event were truly eye popping, as Melina, Maria, Candace, Christy and Stacy all stripped down to their lingerie. 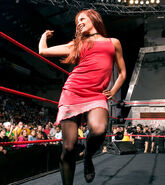 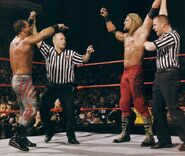 Retrieved from "https://prowrestling.fandom.com/wiki/November_29,_2004_Monday_Night_RAW_results?oldid=1563566"
Community content is available under CC-BY-SA unless otherwise noted.