The Intercontinental Championship may have gone from The A-List to The Yard, but Roman Reigns isn't about to let it sit idly in his trophy case. Agreeing with The Miz's assertion that the Intercontinental Title was worthy of the biggest possible spotlight, The Big Dog kicked off his first Raw as champion with something of an open challenge, only to be confronted by The Miztourage. Left adrift after their leader was defrocked and sent to the shelf by a Shield Triple Powerbomb after Raw went off the air last week, Bo Dallas & Curtis Axel introduced a Superstar who was more than willing to answer The Big Dog's call: Elias.

Cesaro & Sheamus were on top of the world two weeks ago after reclaiming the Raw Tag Team Titles, but it's been rough going for The Bar ever since — and there might be rougher waters ahead yet.

One week after Dean Ambrose knocked off Sheamus, Seth Rollins piled on his partner's success by defeating Cesaro in singles action, bringing it to three straight L's for The Bar since they once again became champions. With Sheamus on sabbatical in Ireland and Ambrose away on his honeymoon, The Kingslayer and The King of Swing were both operating without their safety nets, and the match came down to a war of attrition in the final minutes.

Rollins edged Cesaro by the narrowest of margins, superkicking his opponent out of the air in the middle of a springboard spinning uppercut and landing a ripcord knee for the pinfall. As if the loss wasn't enough for The Swiss Cyborg to stomach, Rollins made it very clear after the match that The Shield remained a united front, and he and The Lunatic Fringe would be invoking their rematch clause against Cesaro & Sheamus on next week's Raw to potentially land a title for all three Hounds of Justice.

Survivor Series may have gotten in the way, but there's still unfinished business between Samoa Joe and Titus O’Neil. Unfortunately, The Big Deal's attempt to avenge The Samoan Submission Machine's sneak attack from weeks ago (which was itself some intended payback for a similar jumping of Apollo Crews) ended in disaster.

Titus did manage to escape one Coquina Clutch and rain open-palm slaps on his foe in the long-gestating match, but when the ref attempted to hold back one overly-aggressive press from The Big Deal, Joe dropped Titus with a straight right over the official's shoulder and reapplied the Coquina Clutch to submit O’Neil. Joe punctuated his evening with yet another assault on Crews, who stepped up to Joe and found himself ensnared in the Coquina Clutch as well.

Payback will have to wait for Sasha Banks, Bayley and Mickie James against the trio of Paige, Mandy Rose and Sonya Deville, as the scheduled Six-Woman Tag Team Match was undone before it even began thanks to an attack from the team that is now formally calling itself Absolution.

Bayley and James were dispatched in the locker room before the bell even rang, mainly because Paige and her lieutenants wanted to make an overture to The Boss to join their ranks. Insisting that they had pledged allegiance to Paige for trailblazing the Women's Evolution before the likes of Charlotte Flair, Asuka or Alexa Bliss, Absolution give Banks the opportunity to join them rather than suffer the same fate as Bayley and Mickie. (Alexa Bliss, who had planned on scouting the Six-Woman Match from commentary, made herself scarce in a hurry.)

Rather than join the trio, The Boss instead opted to throw hands with Paige, and Absolution quickly swarmed the former Raw Women's Champion before feeding her into an emphatic Ram-Paige from the self-proclaimed “Matriarch.”

Matt Hardy claimed last week he was edging closer to his "breaking point." Ironically, Bray Wyatt may have gotten there first and taken Matt with him. The Reaper of Souls addressed the WWE Universe for the first time in weeks, claiming they had failed to listen when he tried to show them the way and that they were all “dead” in their subsequent ignorance, cackling madly in the dark before Hardy emerged for their match.

As for Hardy, his gutsy effort against the former WWE Champion ended in a missed moonsault and a Sister Abigail. But his evening concluded on a far more ominous note, as he slumped over in the corner, slashed his fist through the air and screamed “Delete!” over and over again long after Wyatt had left the ring.

With all the drama surrounding Stephanie McMahon and Triple H in recent weeks, Raw General Manager Kurt Angle admitted he'd let the Cruiserweight division get away from him a little bit. So, with Enzo Amore running the show and The Zo Train watching his back, Angle sanctioned a pair of Fatal 4-Ways, with the winners to meet in two weeks to determine Enzo's next challenger.

The first to advance? Rich Swann, who overcame a steep deficit against Akira Tozawa, Noam Dar and Ariya Daivari with a monstrous Tower of Doom on his fellow Cruiserweights that instigated a four-way sprint to the finish line. After Tozawa dispatched Daivari with the big senton and Dar took out Tozawa with a running kick to the head, Swann hauled The Stamina Monster out of the pinning position, enziguiri’d The Scottish Supernova in the mush and swooped down for the win with an incredible Phoenix Splash.

The win came in The Big Dog's title defense against Elias, who put up a formidable fight in the biggest opportunity of the young Superstar's career. Competing for his first title, Elias stuck to the ground-and-pound strategy that had brought him to the dance, and The Miztourage did their part at ringside, distracting Reigns as he pulled ahead and allowing his challenger to get back in the thick of things with a picturesque elbow drop.

Reigns tilted the contest back his way by reversing Drift Away into a roll-up attempt, and despite Elias countering one Spear with a knee to the face, The Big Dog's second attempt at the move seconds later hit its mark and sent the champ home victorious.

As for the asterisk? Right as Reigns was making his exit, he turned to thank the WWE Universe once more and was bulldozed from behind by Samoa Joe, who trapped The Big Dog in the Coquina Clutch, delivering a stark reminder that the life of a fighting champion is a long, hard one with no end in sight.

Dana Brooke demanded and received a rematch against Asuka, much to her detriment, but a near-flawless display by The Empress of Tomorrow led into an unusual sight once Absolution came calling.

Despite Brooke's assertion that Asuka was a slow starter, the undefeated former NXT Women's Champion made immediate work of her opponent — armbar, tap — but the sight of Absolution quickly changed the complexion of the proceeding. As Paige, Sonya Deville and Mandy Rose encircled the ring, The Empress of Tomorrow and her foes seemed to size up their options, leading to what appeared to be a silent, mutual understanding that their clash would have to wait. For how long, of course, is the big question.

Jason Jordan has read the tweets and he's out to prove them wrong — perhaps, to his detriment.

The young Superstar was out for redemption after he tweaked his knee against Braun Strowman last week and was subjected to raised eyebrows from the WWE Universe who thought he might be milking it. He decided to do so in a match against Kane, but despite an impressive display of power from the former SmackDown Tag Team Champion, The Big Red Machine threw him over the ropes and Jordan landed square on the injured knee, causing Jordan immense pain and leading to a count-out loss.

It also led to a brutal beating at the hands of The Devil's Favorite Demon, who methodically took Jordan apart after the bell until Finn Bálor appeared to cut the assault short.

Finn Bálor came to Raw looking for a fight with Kane, and he wasn't the only one. The first-ever Universal Champion had given The Big Red Machine such a battle that Kane hit Bálor with a chair to end their bout in a disqualification, but a grisly post-match beatdown on Finn led to the re-emergence of Braun Strowman, who shrugged off a chair swing with such impunity that Kane retreated in terror.

The Monster Among Men, of course, showed no quarter to his enemy, brutalizing The Big Red Machine outside the ring and delivering a Running Powerslam atop the steel steps before jamming the chair into Kane's throat twice — turnabout from last week's savagery. The Devil's Favorite Demon was forced to flee through the WWE Universe to escape Strowman, who surprisingly didn't pursue the former WWE Champion to inflict more punishment. For now, it seems, getting even was enough. But that doesn't mean he's finished just yet. 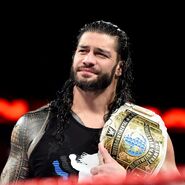 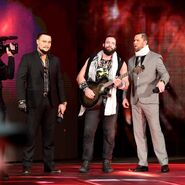 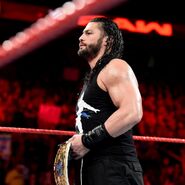 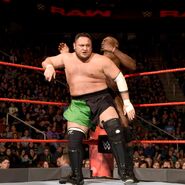 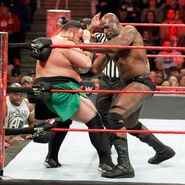 Retrieved from "https://prowrestling.fandom.com/wiki/November_27,_2017_Monday_Night_RAW_results?oldid=1563523"
Community content is available under CC-BY-SA unless otherwise noted.