December 4, 2013
The November 27, 2013 Edition of Main Event is a Professional wrestling television show of the WWE, it was taped at the Mohegan Sun Arena in Uncasville, Connecticut on November 26, 2013.

Before the Superstars battle loved ones for turkey drumsticks, there were plenty of battles to be fought on the Thanksgiving Eve edition of WWE Main Event. After coming up short against John Cena at Survivor Series, Alberto Del Rio looked to get back on track against Dolph Ziggler. Fresh off his victory in a Hamptons Hardcore Match on Raw, Damien Sandow took on Santino Marella. Also, Kofi Kingston faced Fandango once again, this time without The Miz at ringside to interfere.

WWE Main Event kicked off with a clash between two former World Heavyweight Champions. Dolph Ziggler and Alberto Del Rio rekindled their rivalry, with bragging rights on the line Wednesday night. The Mexican Aristocrat controlled the early moments of the match, working over Ziggler's neck.

Though The Showoff had already been through a vicious Hamptons Hardcore Match on Raw, he showed no signs of weakness Wednesday night. Ziggler regained his composure and hit Del Rio with 10 consecutive elbow drops to the delight of the WWE Universe. However, Del Rio soon cut Ziggler off with a devastating tilt-a-whirl backbreaker.

Ziggler was able to send Del Rio crashing to the arena floor with a dropkick, but was soon sent shoulder-first into the ringside barricade himself. The Mexican Aristocrat quickly took the match back into the ring and took control. The Showoff was able to get in quick bursts of offense, but Del Rio was always able to pounce back on the attack shortly after.

It looked as though Ziggler was going to turn things around after he countered a top-rope attack from Del Rio with another dropkick. The Showoff followed up with a big splash in the corner and a flurry of right hands. On Wednesday night, however, Del Rio would not stay down.

Ziggler went to the top ropes in hopes of finishing the match. Del Rio got back to his feet and hit a breathtaking reverse suplex from the middle rope. The Showoff valiantly fought back to his feet, but once The Mexican Aristocrat locked on the Cross Armbreaker, Ziggler was left with no choice but to tap out.

Santino Marella power walked to the ring with a purpose on Wednesday night. He was hoping to get his Thanksgiving off to a great start with a win, but Damien Sandow had other plans. The Intellectual Savior of the Masses showed off his newfound aggression at the start of the match, rocking Marella with a shoulder block and an elbow to the jaw.

The always-jovial Santino tried to lighten up the proceedings, but Sandow was in no mood for joking. He took Marella to the floor and viciously tossed him into the barricade. Though Santino was able to muster a quick burst of offense and had The Cobra armed and ready to strike. However, there was no room for the reptile in Sandow's Thanksgiving plans, as he evaded The Cobra and landed “You’re Welcome” to pick up the victory.

After their controversial matchup on last week's WWE Main Event, Kofi Kingston and Fandango clashed again. The Miz was not at ringside to interject into the proceedings this week, leaving the two agile Superstars to settle their differences in the ring one-on-one.

Fandango tried to show off a few of his trademark dance moves after the opening bell, but Kingston cut him off and nearly ended the bout with a quick roll-up. Fandango thought he was on offense after executing a monkey flip on The Dreadlocked Dynamo, but Kingston landed on his feet and hit a monkey flip of his own. A frustrated Fandango got Kofi on the floor and tried to land a risky dive over the ropes. Kingston evaded him, leaving his fleet-footed foe to crash and burn.

Kofi landed a stunning flip on the arena floor, but once the action returned to the ring, the ballroom dancer took control once again, grounding his foe. However, Kingston eventually showed why his new mantra is “skillz all day.” Building up a head of steam, Kingston used his speed and agility to stay one step ahead of Fandango. Though Summer Rae tried to distract him with her screeches and Fandango floored him with a sunset flip powerbomb, Kingston avoided the top-rope legdrop and connected with Trouble in Paradise to start his Thanksgiving off the right way – with a win. 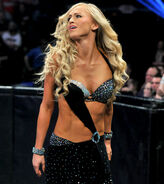