The November 25, 2011 Edition of Smackdown is a Professional wrestling television show of the WWE's Smackdown brand, which took place on November 22, 2011 at the Mohegan Sun Arena at Casey Plaza in Wilkes-Barre, Pennsylvania.

World Heavyweight Champion Mark Henry hobbled to the ring, the direct result of an injury suffered at the hands of Big Show five days earlier at Survivor Series.

The World's Strongest Champion denied that he got himself intentionally disqualified at the Silver Anniversary of WWE's second longest running pay-per-view, saying his adversary made that up to make him look like the bad guy. When Big Show emerged, Henry declared that there wouldn't be a title rematch. Instead, he called the giant “The World’s Largest Loser,” inspiring the massive Superstar to knock him out with the WMD.

Moments later, Daniel Bryan stunned the WWE Universe by emerging to cash in his Money in the Bank briefcase and pin the out-cold Henry for what appeared to be the biggest victory of his career. However, SmackDown GM Theodore Long informed him that because The World Strongest Man was injured and not “medically cleared” to compete, the pin was invalid.

Returning the Money in the Bank briefcase to Bryan, Long proclaimed that he would compete in a Fatal 4-Way main event to decide who will face Henry for the World Title during a LIVE episode of SmackDown this Tuesday at 8/7.

Knocking Justin Gabriel off the top rope, an extremely brutal Hunico flipped down onto his high-flying opponent to claim a huge win.

One week ago, Kaitlyn was noticeably upset when her partner AJ tapped out to Natalya's Sharpshooter to end their match against the "pin-up strong" duo. This week, Michael Cole reported that the blonde Diva's frustration came from the large amount of attention her partner was paying to Daniel Bryan, rather than focusing on their matches.

In their tag team rematch – with Alicia Fox sitting in with the SmackDown announce team – Natalya again scored a victory over AJ with the Sharpshooter.

However, after the bell, Kaitlyn decided to walk out on her best friend, leaving Natalya free to put AJ in another submission hold – trying to make the “spunky” Diva cry. Without A-Fox intervening, AJ might have been locked in the painful maneuver indefinitely.

Dolph Ziggler did not come to SmackDown at a loss for words, as both Vickie Guerrero and the bleach blond champion openly bragged about his two victories at Survivor Series five days ago.

Still, all the talk in the world couldn't stop the United States Champion from getting pinned by Zack Ryder for the third time in a month, this time in tag team action. The Long Island Iced Z executed the Rough Ryder leg lariat on Ziggler for the victory – just seconds after Sheamus avoided the Zig Zag with a display of incredible power.

As Ted DiBiase and Heath Slater were set to lock horns, Jinder Mahal appeared on the TitianTron – admonishing the leader of the "DiBiase Posse" in both Punjabi and English for “forsaking his family, wealth, and upbringing” to hang out in parking lots with a bunch of mere commoners.”

Slater took advantage of the distraction, attacking his opponent from behind. This set the ground work for an intense battle between the two determined Superstars. Despite a hard-fought match by The One Man Southern Rock Band, DiBiase ultimately reigned supreme with Dream Street.

In a whirlwind Fatal 4-Way Match, Daniel Bryan, Randy Orton, Wade Barrett and Intercontinental Champion Cody Rhodes faced off to decide who would challenge an injured Mark Henry for the World Heavyweight Championship this Tuesday.

Just when Orton looked ready to close the door on Bryan in the conclusion of the explosive showdown, Barrett pulled The Viper out of the ring and extinguished his offensive with a DDT. Rhodes seized the opportunity, attempting to pin the fallen Bryan. However, out of nowhere, Mr. Money in the Bank turned the tide, locking in the LeBell Lock to make the Intercontinental Champion tap out.

After the bell, an infuriated Rhodes attacked the triumphant Superstar. But, Randy Orton quickly put a stop to his offensive, hitting the aggressor with the RKO and allowing Bryan to savor his moment.

As a result of his mega-victory, Bryan earned himself a World Heavyweight Title Steel Cage Match against Mark Henry on the following LIVE holiday edition of SmackDown. 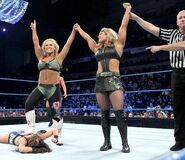 Retrieved from "https://prowrestling.fandom.com/wiki/November_25,_2011_Smackdown_results?oldid=1563411"
Community content is available under CC-BY-SA unless otherwise noted.