November 30, 2016
The November 23, 2016 Edition of NXT is a Professional wrestling television show of the WWE, which took place at the Air Canada Centre in Toronto, Ontario, Canada on November 19, 2016, before NXT TakeOver: Toronto went live on the WWE Network.

The first match following TakeOver: Toronto was full of action and drama, as Rich Swann and Kona Reeves traded high-impact moves. However, just as Swann looked to take control of the contest, SAnitY made their eerie entrance.

The group of anarchy-loving Superstars proceeded to unleash a vicious attack on both Swann and Reeves. Eric Young then addressed the NXT Universe in Toronto, telling the crowd that SAnitY will not be asking for permission, rather they will just take.

While officials checked on the fallen Rich Swann and Kona Reeves, No Way Jose made his way into the ring to make sure his Dusty Classic tag team partner was OK. A furious Jose then got on the microphone and called out Eric Young and his SAnitY cohorts for their callous attack.

Jose, who challenged Young specifically, may end up regretting the decision, as the crazed Superstars were not looking for a fair fight. After Jose appeared to be gaining the advantage, Young's allies in chaos entered the ring and proceeded to unleash a brutal attack on Jose.

Last week, Ember Moon joined Liv Morgan and Aliyah's fight against the cruel duo of Billie Kay and Peyton Royce. Moon's inclusion gave the trio the numbers advantage and left the ruthless Superstars looking for a third competitor to join their cause.

In a WWE.com Exclusive video, Kay and Royce found a willing participant in Daria Berenato, who at first seemed like a great addition to the unforgiving pair. However, amid an action-packed Six-Woman Tag Team Match, Kay and Royce's true colors came through. While Moon inflicted a spectacular attack on Royce, the Femme Fatale decided she had seen enough. The devious Aussie pulled Royce back to their corner before forcing a dazed Daria to tag back into the contest. Kay and Royce then walked away and watched as Moon nailed a diving corkscrew stunner from the top rope on a bewildered Daria for the victory. 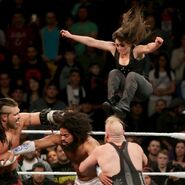 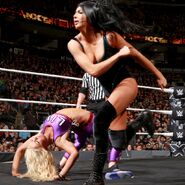 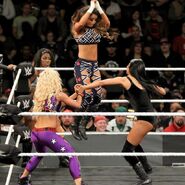 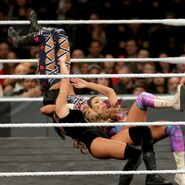