The Cerebral Assassin may have outsmarted General Manager Chris Benoit on Monday night, but next week's boss had already gotten the best of Triple H.

Randy Orton couldn't take on Triple H for the World Heavyweight Championship, so next week's General Manager announced the next best thing: a company-wide over-the-top-rope battle royal placing the entire RAW roster in the ring with Triple H, with the World Heavyweight Championship up for grabs. And the two men Triple H used to make a mockery of Benoit will be in that battle royal against their faction's leader.

When the Rabid Wolverine took his turn controlling RAW, he immediately placed himself in a steel cage match against Triple H with the World Heavyweight Championship on the line. “The Game” knew his chances of walking out of Buffalo, N.Y., with the title were slim, so he concocted a complicated plan to screw The Crippler out of his title opportunity. It involved a phony argument, a phony doctor and a phony injury, but the result was very real: Triple H didn't have to defend his title after all.

Throughout the evening, Triple H clashed with Evolution's animal Batista. “The Game” even went so far as to say that Batista was a man with “a million-dollar body and a 10 cent brain.” It appeared as if we were witnessing the disintegration of Evolution before our very eyes. Batista was a powder keg, and Triple H lit the fuse.

Then, a seething Batista nearly broke Chris Jericho's neck. The big man picked up Y2J and tied him to the tree of woe in the corner. He then jumped outside the ring and applied a choking reverse headlock, which he refused to release — even when the referee threatened to disqualify him. At the count of five, the referee was forced to call for the bell and for help. Batista wasn't done, waiting until Jericho got to his feet before blasting him with a vicious clothesline.

Afterward, Triple H and Batista went at it again when Evolution's leader scoffed at Batista's inability to beat Jericho, who did officially win via disqualification. Batista stormed off, and when it came time for Triple H to defend the World Heavyweight Championship, he mysteriously had been incapacitated. After the events that evening, the incident seemed to have Batista written all over it.

The assigned physician refused to let Triple H compete in his current condition, leaving Benoit momentarily without an opponent. The Rabid Wolverine decided to force Edge to replace Triple H. Then, things only got worse for Edge inside the steel cage. Edge survived Benoit's diving headbutt and Crippler Crossface, but he then accidentally speared Benoit right out the steel cage door, giving his opponent the victory.

But any delight Benoit took in his win quickly evaporated when Evolution's detailed plan was revealed. Triple H and Batista went nose-to-nose in the ring, seemingly on the verge of coming to blows with only Ric Flair there to keep the peace. Then, the laughter began. Triple H embraced Batista, and the trio boasted to the crowd that everyone bought into their elaborate scheme.

Triple H called for ladies from backstage to come out and celebrate, but Orton emerged instead. When the GM-to-be announced next week's main event, the RAW locker room emptied. Orton was soon flanked by 20-plus Superstars all itching for a once-in-a-lifetime chance to win gold with the odds badly stacked against the champion.

Despite Triple Threat rules and a broken nose, Trish Stratus retained her Women's Championship against Lita and Molly Holly. After the match, Lita soured Trish's victory by dropping her into a rear-naked choke, further damaging the champ's nose.

RAW sponsor Simon Dean interrupted Stacy Keibler's ECW DVD giveaway, bringing out a Simon System DVD he said the “fat, disgusting” RAW fans could really use. When things became heated, The Hurricane came to Stacy's aid. But Simon dumped RAW's superhero with a low blow, then pummeled him with a weightlifting belt before escaping up the ramp.

Also, RAW newcomer Muhhamad Hassan warned that any who stand in his way are in for serious trouble. 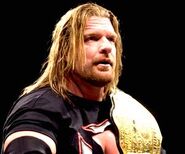 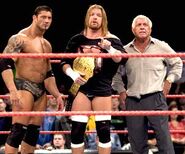 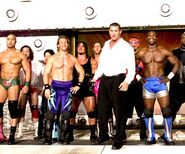 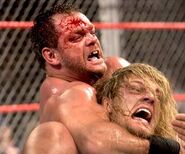 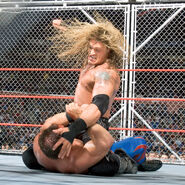 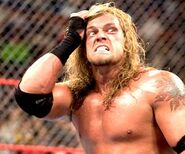 Retrieved from "https://prowrestling.fandom.com/wiki/November_22,_2004_Monday_Night_RAW_results?oldid=1563203"
Community content is available under CC-BY-SA unless otherwise noted.