Disgusted with the former long time foes, now Tag Team friends, Kevin Owens & Sami Zayn, for interfering during the Men's Traditional Survivor Series Match this past Sunday, SmackDown LIVE Commissioner Shane McMahon called the troublesome duo to the ring to address their controversial actions. Owens & Zayn heeded his call, hitting the scene and doubling down on their actions, claiming they would’ve brought home victory for Team Blue had they been given a more prominent role this past Sunday. With KO & Zayn clearly showing no remorse, it seemed Shane was gearing up to channel his father and passionately fire the duo, but Daniel Bryan arrived to offer an alternate suggestion.

The Team Blue General Manager informed the WWE Universe that he had to send Randy Orton home tonight because The Viper claimed he couldn't be held responsible for his actions when he encountered Owens and Zayn. Bryan stated that Orton wasn't alone, and virtually the entire SmackDown LIVE roster felt the same way. Thus, tonight, Owens & Zayn would take on The New Day ... in a Lumberjack Match!

With his squad's count-out victory over The Usos in a Tag Team Championship Match two weeks ago still looming large, Shelton Benjamin looked to continue the momentum for himself and Chad Gable as he squared off against Jey Uso on SmackDown LIVE.

With their respective teammates watching on at ringside, the two Superstars electrified the WWE Universe in an all-out slugfest. With momentum shifting back and forth in the squared circle, Jimmy and Gable started to throw down on the outside, which led to Benjamin evading a big splash from Jey (who had just dispatched Gable) and connecting with Paydirt to pick up the crucial victory.

After weeks of anticipation, Harper & Rowan reemerged on SmackDown LIVE to face off against The Hype Bros, and Zack Ryder and Mojo Rawley were no match for the bludgeoning that was upon them. Ryder was brutalized on the outside, Harper slapped Rowan across the face to seemingly hype him up prior to attacking Rawley, and the imposing new tandem finished off Mojo with a brutal double-team maneuver for the first of many wins ... and bludgeonings.

Following his instant classic of a contest with Universal Champion Brock Lesnar at Survivor Series, WWE Champion AJ Styles came to SmackDown LIVE with one purpose: To settle the score with Jinder Mahal ... right now! The Phenomenal One was ready to put his title on the line, but a defiant Mahal responded via the TitanTron, seemingly with no intention of locking up with Styles tonight. Instead, The Modern Day Maharaja declared that he would be invoking his rematch clause at WWE Clash of Champions next month, noting that Texas isn't deserving of such a match to the ire of the WWE Universe.

Then, before Styles could retort, he was ambushed by Mahal's faithful cohorts, The Singh Brothers. It wasn't before long, though, until AJ vanquished both Singhs while he forced Mahal to watch from the Tron as he nailed an emphatic Styles Clash.

Following their thrilling SmackDown Women's Title Match last week that saw Charlotte Flair win the championship in her hometown, The Queen and Natalya squared off in a rematch here tonight on SmackDown LIVE.

The two Superstars brought the heat in their quest to stand atop the Team Blue mountaintop, but their battle was cut short when SmackDown LIVE newcomers Ruby Riot, Liv Morgan and Sarah Logan made their second appearance of the night. After brutalizing Naomi and Becky Lynch backstage earlier in the evening, the three now mercilessly ambushed Natalya and Charlotte.

The result was the two veterans down and motionless while the new trio from WWE NXT stood tall after sending shockwaves through the SmackDown LIVE Women's Division.

With their jobs potentially in jeopardy, Kevin Owens & Sami Zayn begrudgingly squared off against The New Day in a Lumberjack Match on SmackDown LIVE.

Surrounded by a plethora of Team Blue Superstars who were obviously none-too-pleased with KO & Zayn after they betrayed Team Blue at Survivor Series, Owens and Zayn did their best to survive. However, the order was a tall one, as none of the lumberjacks seemed all too motivated to force either Big E or Kofi Kingston back into the ring whenever they exited, but would immediately pounce on Owens and Zayn.

Owens and Zayn got the reprieve they were looking for when Baron Corbin missed Zayn with a punch that instead connected with Bobby Roode, setting off a brawl between all the lumberjacks. The commotion allowed Zayn to catch Kofi off-guard with a rollup to score the 1-2-3. Following the match, Rusev & Aiden English (who Owens and Zayn had asked for assistance earlier in the evening) also struck down on The New Day, attempting to blindside the group and helping KO escape through the WWE Universe.

The New Day fought back, as Kofi Kingston leapt off the top rope to the outside to neutralize The Bulgarian Brute and The Mozart of Maheym. From there, The New Day decimated Zayn with Trouble in Paradise and The Midnight Hour.

Owens, who managed to avoid The New Day beatdown, didn't fully escape, as he was greeted by Daniel Bryan after dashing to the backstage area. After pleading with The “Yes!” Man not to fire him and Zayn, KO was met with a bombshell announcement when Bryan informed him that he would face off against Randy Orton on SmackDown LIVE next week! 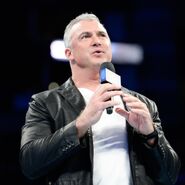 The Bludgeon Brothers vs. The Hype Brothers

Jinder Mahal attempts to get a leg up on AJ Styles

Retrieved from "https://prowrestling.fandom.com/wiki/November_21,_2017_Smackdown_results?oldid=1563198"
Community content is available under CC-BY-SA unless otherwise noted.