Triple H won the Survivor Series Match for Team Raw and saved Kurt Angle's job in the process, but because of the way he went about doing that, everyone wants a piece of him now.

There's Angle himself, who was Pedigreed by The King of Kings in the midst of the match and served The Cerebral Assassin with an immediate threat of retaliation. There's also Angle's son Jason Jordan, who was Pedigreed by The King of Kings last week, kicked off the Survivor Series team and replaced by Triple H after suffering an untimely injury. Walking with a purpose to the squared circle on Raw, Jordan claimed to be fully healed and hungry for a fight with the WWE COO.

And then, of course, there was Braun Strowman, the co-survivor who The Game attempted to lure into some kind of alliance after the epic match, which resulted in The Monster Among Men dropping Triple H with a pair of Running Powerslams. Twenty-four hours later, Strowman took exception to Stephanie McMahon's claim that there wasn't anybody the former WWE Champion feared to face, but luckily for The Game, Stephanie was able to de-escalate the situation as quickly as it ramped up: Amid mounting tensions, she sanctioned Jordan vs. Strowman for later in the evening, thereby pitting two of her husband's would-be annihilators against each other.

Survivor Series has come and gone, and Samoa Joe is done playing nice. The two-time NXT Champion celebrated the end of his circumstantial alliance with Finn Bálor by whomping the first-ever Universal Champion in singles action, claiming the win over the Irishman that had eluded him two weeks prior.

Joe did so by unleashing every bit of pent-up aggression he'd been holding back for the last couple of weeks, pulverizing Bálor in the early goings with a series of earthshaking strikes and remaining one step ahead of Finn's big moves. Raw's resident extraordinary man unleashed his speed in response and rolled out of the Coquina Clutch to hit a double stomp, but Joe was ready for what was coming next. As a weakened Bálor slowly mounted the turnbuckle in advance of the Coup de Grâce, The Samoan Submission Machine tripped him up, mercilessly hauled him off the ropes, locked in the Clutch and put Finn to sleep.

Last week, Dana Brooke elbowed Asuka in the jaw, and The Empress of Tomorrow responded by kicking Dana in the side of the head and costing her an opportunity to compete at Survivor Series. This week, the jilted Superstar promised to repay the favor by exposing the deficiencies in Asuka's game and ending The Empress of Tomorrow's undefeated streak. That ... did not happen.

Brooke's tough talk did lead to a bold opening sequence where she attempted to go hold-for-hold with the former NXT Women's Champion, but Asuka turned the tables almost immediately with an armbar over the top rope and never looked back. The most significant offense Dana mounted from then on was a wicked slap to The Empress of Tomorrow that did nothing but infuriate her opponent to the point of no return, and another pair of barbaric kicks to the side of the head spelled the end for Dana once again.

With The New Day in the rear view, the time has come for The Shield to get back down to business. For Dean Ambrose & Seth Rollins, that means getting their Raw Tag Team Titles back from The Bar, and they started off on a near-perfect note when The Lunatic Fringe upended Sheamus thanks to a timely assist from his brother-in-arms.

Ambrose and Sheamus had battled to a dead heat after a lengthy contest, with the Raw Tag Team Champion pulling ahead on the back of a second-rope rolling senton that earned a looooong two-count for The Alabaster Gladiator. With Rollins previously taken out by Cesaro, the field was open for Sheamus to land a Brogue Kick, but The Kingslayer sprinted across the ring to repay The King of Swing with a suicide dive, distracting Sheamus and allowing Ambrose to pounce with Dirty Deeds for the win.

Alexa Bliss fell to Charlotte Flair at Survivor Series, and as a result, almost the entire Raw Women's division was out for an opportunity to challenge Little Miss Bliss — Bayley, Sasha Banks, Alicia Fox, and Mickie James to be exact. But in one fell swoop, the Women's Evolution leapt forward and threw the pecking order of Raw's Women's division out the window.

Raw General Manager Kurt Angle placed the four would-be challengers into a Fatal 4-Way Match to determine Alexa's next challenger, but the action was cut short when Paige emerged on the entranceway, stopping the action cold with an ominous proclamation: “I’m back … and I didn’t come alone.”

As the assembled Superstars kept their eyes on the former Divas Champion, Sonya Deville and Mandy Rose from NXT rushed the ring from behind. While Alicia screamed and ran for cover, Mandy dispatched Mickie, Sonya felled The Boss, and Paige brought the curtain down on The Huggable One with the Ram-Paige.

After Alexa seemingly tried to make friends with the trio backstage, they followed up with a three-on-one attack of the champion, capping off an unmistakable statement to the entire Raw Women's division: They forgot whose house they were biding their time in.

Jason Jordan didn't defeat Braun Strowman, but he did survive him, which is about all he could have hoped for. And, after a stunning turn of events, he owes a big thank-you to Kane for allowing that to happen.

Despite Jordan's insistence that he was back to full strength, his knee buckled repeatedly in his attempts to muscle The Monster Among Men around the ring. He did manage to get Braun off his feet at one point, but that was about the extent of his offense, and things were looking bad after Jordan spilled to the outside.

At that moment, The Big Red Machine rose from beneath the ring and chop-blocked Strowman to end the match in a disqualification. Moments later, Kane seized a steel chair to repay Strowman for his savagery the previous week, and his assault included a ruthless strike to the throat that left The Gift of Destruction doubled over and gasping for air. He didn't go down, of course, and he would later refuse medical attention. But the sight of the staggered Strowman was an ominous sign that Kane has plenty of fire in him yet.

Whatever you may think about him, Enzo Amore has indeed gotten more eyes on 205 Live, but when it comes to showcasing the best the Cruiserweight division has to offer, Muscles Marinara and his goons might have a way to go.

Enzo's assembled Zo Train — Drew Gulak, Ariya Daivari, Tony Nese & Noam Dar — squared off against the resident workhorses of 205 Live in an Eight-Man Tag Team Match and came up short in a major way, despite the presence of Amore himself at ringside. A brief fracas between the two teams briefly made it anybody's game, but combination of Cedric Alexander's Lumbar Check to Nese and Mustafa Ali's 054 (that's a reverse 450) to Dar won the day. But with Gulak vowing to dispose of Akira Tozawa "Philly-style" in a Street Fight on 205 Live tomorrow, there may yet be time to turn The Zo Train around.

It's not enough for Elias to defeat someone; he's got to go and make a song about it. In this case, he penned a special tune for Matt Hardy, who he upended at Survivor Series Kickoff, about how “lost” Hardy is without his injured brother. Hardy himself wasn't a fan of this musical tribute, and the former Raw Tag Team Champion made his displeasure known by interrupting the performance, landing some stinging haymakers and chasing Elias from the ring.

Not wanting to be left out of The Shield's collective pursuit of championship glory, Roman Reigns decided he wanted a title of his own during an interview on “Miz TV.” And with Dean Ambrose & Seth Rollins going after the Raw Tag Team Titles, the closest prize available was The Miz's Intercontinental Championship. A scant two hours later, and that championship had a new home in the trophy case of The Big Dog's yard.

Yes, Reigns is officially the new Intercontinental Champion, having picked apart The A-Lister in Raw's main event. Minus the safety net of The Miztourage, who were taken out by The Shield earlier in the night, The A-Lister gave The Big Dog a tougher fight than perhaps he was expecting — those It Kicks found their mark even with Reigns’ extra protection, and The Awesome One chop-blocked Reigns out of the air in the middle of a Superman Punch.

Despite a truly impressive effort by the champion and a last-minute interference by Cesaro & Sheamus, Reigns had one extra burst left to carry him to glory. The Big Dog kicked out of the Skull-Crushing Finale and emphatically Speared his way to the title after The Shield disposed of The Bar at ringside, setting off a celebration with his brothers to cap a performance that wasn't just a home run — it was a Grand Slam.

Mickie James vs. Bayley vs. Sasha Banks vs. Alicia Fox 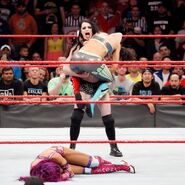 The Miz vs. Roman Reigns

Retrieved from "https://prowrestling.fandom.com/wiki/November_20,_2017_Monday_Night_RAW_results?oldid=1563177"
Community content is available under CC-BY-SA unless otherwise noted.