The November 20, 2013 Edition of Main Event is a Professional wrestling television show of the WWE, it was taped at the Phillips Arena in Atlanta, Georgia on November 19, 2013.

It was a wild Wednesday on WWE Main Event, just four days away from Survivor Series. Divas Champion AJ Lee was scheduled to take on Naomi, but an ankle injury led to her muscle, Tamina Snuka, replacing her. Santino Marella set out to throw Alberto Del Rio off-course before Sunday's rematch with World Heavyweight Champion John Cena, while Kofi Kingston attempted to send a message to his Survivor Series Kickoff opponent, The Miz, when he took on Fandango.

Originally, AJ Lee was scheduled to face Naomi, but due to an ankle injury, she asked The Authority to replace her in the bout with Tamina Snuka. Her request was granted, so The Funkadactyl had to prepare for an entirely different opponent on short notice.

Naomi tried to use her speed and agility to evade her powerful foe, but Tamina caught the nimble Diva in her clutches in the early going. Naomi's “Total Divas” teammates cringed as Snuka muscled The Funkadactyl around with ease. Eventually, Naomi was able to slip out of Tamina's grip and catch the powerful Diva with a well-placed dropkick to take control of the bout.

The opposing Survivor Series teams nearly came to blows, with 13 of the Divas squaring off at ringside while the manipulative AJ sneered in delight from afar. When the action returned to the ring, Tamina took charge, working over Naomi's leg. However, the tension between the “Total Divas” and the “True Divas” boiled over, resulting in an all-out brawl on the arena floor until Naomi crashed down on both teams with a beautiful dive.

It looked as though The Funkadactyl had the bout won after a picture-perfect cross body off the top rope. However, Tamina recovered quickly and leveled Naomi with a superkick to claim the win. Can Tamina, AJ Lee and the rest of the self-proclaimed “True Divas” take advantage of the momentum boost this Sunday at Survivor Series?

Looking to stay sharp ahead of his rematch with World Heavyweight Champion John Cena this Sunday at Survivor Series, Alberto Del Rio battled Santino Marella on WWE Main Event. Santino was hoping to catch The Mexican Aristocrat looking past him, but that wasn't the case Wednesday night.

Del Rio was in no mood for Marella's opening bell antics. When Santino gloated after cartwheeling out of an Irish Whip, Del Rio kicked him in the stomach and unloaded a flurry of ferocious fists on the Italian Superstar.

Though Santino tried his best to wrestle out of Del Rio's grasp, The Mexican Aristocrat was always one step ahead, ready to land a vicious kick at a moment's notice. Marella briefly mustered up some offense, but soon found himself trapped in the Cross Armbreaker, with no choice but to tap out.

With his Survivor Series Kickoff Match against The Miz looming and The Awesome One watching from the commentary table, Kofi Kingston set out to send his Awesome opponent a message on WWE Main Event. The fleet-footed Fandango was not about to let Kingston walk all over him though.

Fandango and Kingston are very familiar with each other, having faced off many times. The ballroom dancer knew Kofi was ready to dive to the floor as soon as he left the ring, but Kingston was prepared for Fandango to get out of the way and altered his course. When Fandango took control and looked to land his top rope legrdrop, The Dreadlocked Dynamo rolled to the floor and slid under the ring, popping out the other side and leaping onto his foe.

However, it was neither Kingston nor Fandango who brought about the match's end, but The Miz. When the two Superstars battled to the arena floor again, Kingston sent the dancer hurtling into The Awesome One. An upset Miz tried to confront Kingston, but Kofi clobbered him with a dropkick through the ropes. Unfortunately, that meant Kingston's eyes were off Fandango, who snuck up from behind and rolled Kofi up for the victory.

With The Miz having now cost him two matches this week, Kofi Kingston will be motivated when he clashes with The Awesome One Sunday on the Survivor Series Kickoff at 7:30 p.m. ET / 4:30 p.m. PT. 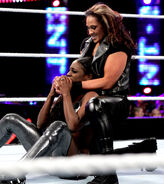 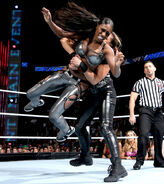 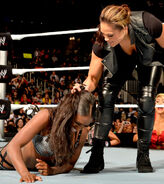 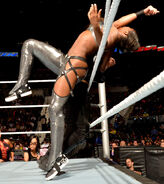 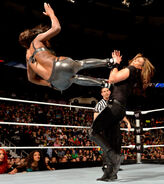 Retrieved from "https://prowrestling.fandom.com/wiki/November_20,_2013_Main_Event_results?oldid=1563171"
Community content is available under CC-BY-SA unless otherwise noted.