November 9, 2016
The November 2, 2016 Edition of NXT is a Professional wrestling television show of the WWE, which took place at the Full Sail University in Winter Park, Florida on October 13, 2016.

TM61 was supposed to face Austin Aries & Roderick Strong in their Dusty Rhodes Tag Team Classic Second Round Match, but The Greatest Man that Ever Lived suffered a freak injury he described as a “broken eye hole,” preventing him from competing.

General Manager William Regal corroborated Aries’ injury and subsequently proposed that either Nick Miller or Shane Thorne battle Strong in a singles match to decide which team moves on to the next round. Amid Thorne and Strong's hard-hitting slugfest, Aries got up on the ring apron to distract the referee after his partner seemed down for the count. While this paid immediate dividends, the move ultimately backfired. Miller confronted Aries outside the ring, prompting Strong to dropkick him. However, the distraction also allowed Thorne to roll up the distracted Strong for the win.

DIY was no doubt champing at the bit to get their hands on NXT Tag Team Champions The Revival in this highly anticipated Second Round matchup. Unfortunately for Johnny Gargano & Tommaso Ciampa, they will have to wait to get in the ring against Dash Wilder & Scott Dawson because the titleholders forfeited the contest.

To the dismay of the NXT Universe and #DIY, Dawson walked out to the stage on crutches before explaining that he suffered a serious knee injury. Dawson went on to reveal that The Revival were pulling out of the Dusty Rhodes Classic. The good news is that Gargano & Ciampa move on to the Semifinal Round. The bad news? The NXT Universe will have to wait to see these foes battle it out inside the squared circle.

In a classic battle of power vs. speed, The Authors of Pain went head-to-head against the high-energy duo of Rich Swann & No Way Jose.

Swann & Jose used their spirited attack in the early goings to frustrate Akam & Rezar. Ultimately, though, Paul Ellering's monsters were just too powerful. Jose nearly picked up the pinfall victory after an all-out assault, but the charismatic Superstar eventually ended up on the receiving end of a vicious double team maneuver that left him down for the three-count.

For much of the contest, Wolfe & Fulton grounded their opponents, but Ibushi would eventually break free and hit an impressive Golden Star Powerbomb on the much-larger Wolfe. Fellow SAnitY members Nikki Cross and Eric Young made sure the referee couldn't count the pinfall, however, as they jumped onto the apron to provide a timely distraction. With the referee's back turned, Fulton nailed The Golden Star with a forearm before being tagged into the contest and joining Wolfe to deliver a devastating tag team move for the victory. 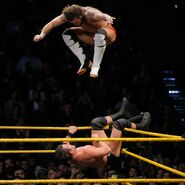 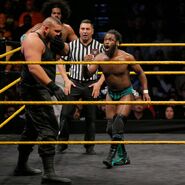 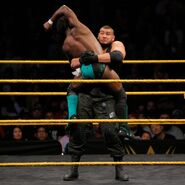 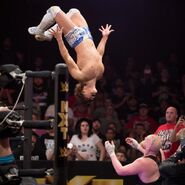 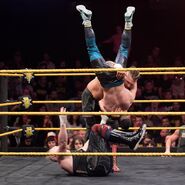