The November 18, 2011 Edition of Smackdown is a Professional wrestling television show of the WWE's Smackdown brand, which took place on November 15, 2011 at the Webster Bank Arena in Bridgeport, Connecticut.

SmackDown opened in a state of turmoil, as the “disrespected” World Heavyweight Champion Mark Henry unleashed a ruthless assault on Daniel Bryan near the locker room area, before dragging his prey out in front of the WWE Universe to continue the carnage. Though Mr. Money in the Bank tried valiantly to fight back, his fierce attacker proved too strong.

After delivering back-to back World's Strongest Slams to finish off the gutsy target of his rage, Henry promised that this Sunday, Big Show will be carried out of Survivor Series at Madison Square Garden and he would leave still the World Heavyweight Champion.

Prior to Dolph Ziggler's match with Sin Cara, Vickie Guerrero praised the fact that the United States Champion will compete twice at Survivor Series – defending his title against John Morrison and replacing an injured Christian in the 5-on-5 Traditional Survivor Series Tag Team Match.

After avoiding Sin Cara's aerial assault, Ziggler reversed his opponent's pin attempt, grabbing the victory with the help of a handful of tights.

When the smug Ziggler celebrated after the match, his outraged masked foe attacked. Guerrero quickly called for Jack Swagger, who emerged to help his Survivor Series teammate. But the two-on-one assault was soon dismantled by Mason Ryan, who charged into the ring and hurled the bleach blond Superstar into the air with incredible force.

Following the altercation that took place after the Sin Cara vs. Dolph Ziggler match, Teddy Long made an impromptu showdown between Mason Ryan and Jack Swagger. The ultra-powerful Ryan ultimately emerged victorious, locking Swagger in a full nelson, before driving him into the canvas.

Claiming the injuries to his neck and ankle that caused him to be replaced at Survivor Series could keep him out of action for months, Christian laid the blame on Big Show's attack two weeks ago, SmackDown GM Theodore Long's “incompetence” and the strain of WWE's recent European Tour.

Promising to continue to inspire the members of Team Barrett to victory at Survivor Series, the former World Heavyweight Champion tore into the WWE Universe for not being sympathetic to his plight.

NXT's power couple, “Beta-Max,” made their SmackDown debut, as Derrick Bateman took on Ted DiBiase. But, with the “DiBiase Posse” in full effect, love would not win out. Instead, it would be the happy-go-lucky second-generation Superstar who picked up another impressive win with Dream Street.

Big Show may have arrived in Bridgeport too late to stop Mark Henry's brutal assault on Daniel Bryan. However, with The World's Strongest Champion's attack on him at Money in the Bank still in the forefront of his mind (PHOTOS), the giant made it clear that his ferocious foe would not walk out of Survivor Series. In no uncertain terms, he promised to capture the World Title with the help of the WMD.

In a fast-paced thrill ride between Survivor Series Tag Team Match combatants, Kofi Kingston reigned supreme over Hunico with the SOS. After the bell, the Mexican high-flyer showed open hostility toward the referee, for what he clearly felt was an earlier missed three-count in his favor.

Two days before Divas Champion Beth Phoenix will battle Eve in a Lumberjill Match at Survivor Series, The Fabulous Firebird teamed up with her “Pin-up Strong” cohort Natalya. Despite a spirited effort by their beautiful opponents, Natalya ultimately made AJ tap out to the Sharpshooter.

An injured Christian lurked at ringside as four of the key Superstars involved in this Sunday's 5-on-5 Traditional Tag Team Match went head-to-head. Though not able to compete, the crafty Superstar still influenced the outcome of the match, delivering a painful crutch blow to Sheamus, ending the match in disqualification.

When Survivor Series Team Captain Barrett & Rhodes attempted to use the crutch after the match, The Celtic Warrior turned the tide, blasting Rhodes with the Brogue Kick. Sheamus then broke the weapon over Barrett's back, setting up Team Captain Orton to blast The English Superstar with the RKO. The Great White then followed suit, hitting the Celtic Cross on the Intercontinental Champion to give Team Orton incredible momentum heading into Survivor Series. 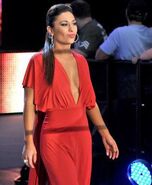 Retrieved from "https://prowrestling.fandom.com/wiki/November_18,_2011_Smackdown_results?oldid=1563133"
Community content is available under CC-BY-SA unless otherwise noted.