November 23, 2016
The November 16, 2016 Edition of NXT is a Professional wrestling television show of the WWE, which took place at the Full Sail University in Winter Park, Florida on October 13, 2016.

ORLANDO, Fla. – Liv Morgan and Peyton Royce wasted no time unleashing their anger on one another, as both rivals started throwing haymakers at the sound of the opening bell. The fierce Royce took control early on, but Morgan fought back behind a spirited attack.

Morgan looked to be on the verge of victory when she locked in a guillotine submission hold on Royce, only to have Billie Kay interrupt the contest and cause a disqualification. Luckily for the New Jersey native, Aliyah ran down to the ring to try and slow down the 2-on-1 attack. The Australian duo could not be stopped, however, as they took out Aliyah as well.

Suddenly, Ember Moon emerged and proceeded to take out both Kay and Royce, sending them from the ring with a double dropkick alongside Morgan.

Elias Samson has returned to NXT and in winning fashion, no less.

After performing a song onstage for the NXT Universe, the man known as “The Drifter” proceeded to defeated Nathan Cruz in impressive fashion. Now fully healed from his ankle injury, who will Samson target next?

Andrade “Cien” Almas and Cedric Alexander were last in the ring together while performing as a tag team in the Dusty Rhodes Tag Team Classic. While they showed great chemistry, they ultimately lost, prompting a frustrated Almas to brutally attack Alexander.

With a chance to gain some retribution, the electric Alexander wasted no time implementing an all-out assault — complete with a barrage of knife-edge chops — against the renowned Almas.

Sporting a new, aggressive attitude, Almas didn't back down, instead fighting back with his own hard-hitting offensive attack. It looked as though Alexander was on his way to victory after hitting the Lumbar Check, but Almas shrewdly rolled over to the ropes. The wily Almas then snapped the second rope into Alexander before nailing him with a vicious hammerlock DDT for the victory. 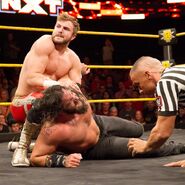 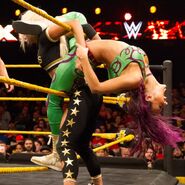 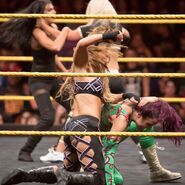 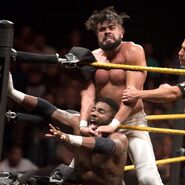 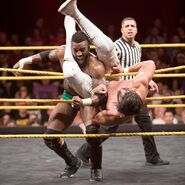 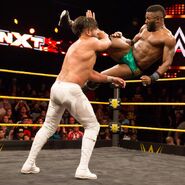