November 23, 2010
The November 16, 2010 Edition of NXT is a Professional wrestling television show of the WWE, which took place at the The Richmond Coliseum in Richmond, Virginia.

Tonight's WWE NXT episodeopened with a video package recapping tonight's elimination episode to cut the Season 3 cast in half. In the arena, Michael Cole introduced the show sounding halfway serious to start things off. Cole then sent it to the ring to hear from Matt Striker.

Striker brought out the four remaining NXT Rookies: Naomi, Kaitlyn, Aksana, and A.J. Cole with his first heel promo of the night ripping on "that goof" Goldust. Once everyone was assembled in the ring, Striker congratulated A.J. and Kaitlyn on winning competitions last week. Striker recapped the immunity deal for tonight and said they're starting with a competition on how well they know their WWE Pros.

How Well do you know your Pro Competition

To stretch this out some more, the Pros were given individual intros on stage including Kelly Kelly, Vickie Guerrero, Goldust, and Primo. Striker then set up the competition to dead silence. The first deal was the Pros having to fill in the blank on what he or she thought when he or she first laid eyes on his or her Rookie.

Primo was up first. A.J. guessed Primo would have thought "underage." Primo wrote down 16-years-old, which Striker said was a match. Aksana said, "hot." Goldust wrote down, "Sexy." The crowd said it's the same, so it was good for a match. Kaitlyn said, "So much prettier than her." Vickie wrote down, "A man." Naomi guessed Kelly would have said, "Athletic." Kelly wrote down the answer, giving Naomi a point.

And now for the in-ring ability on a scale of 1-5. Cole held up a sign that read, "Stop the pain." He apologized for getting carried away. Naomi said Kelly would say five. Kelly agreed. Kaitlyn said this is not a reflection of her actual ability, but 1. The actual retail value was 3. Aksana said it better be five. Goldust wrote down 5. A.J. said 4. Primo wrote down 4.

It must continue. The final question was who the Pros think should be eliminated. A.J. said he thinks Primo would guess Aksana. Primo had Aksana as well, making it three out of three. Striker noted they know each other well. Aksana said she thinks Goldust would say Kaitlyn. Goldy wrote down A.J. instead. Kaitlyn was up next and said Vickie would say Naomi. We have a match. Naomi said she thinks Kelly would say Aksana. She went with Kaitlyn. So, A.J. wins with three matches. Ringside, Mathews and Cole had their own signs. A.J. and Primo traded glances while Mathews noted there will be an elimination tonight as well as an elimination next week.

Mathews took some time to question Cole on why he intentionally tries to buck the trend by endorsing what heels like Lay-Cool do. Cole no-sold before angrily asking Mathews if he's going to be the "typical babyface announcer" and start telling him how to call the show. Mathews said Cole should have listened to Jim Ross on Raw. Kaitlyn worked over Naomi early on while Vickie uttered, "Do something." Cole said he wants to see Naomi go home. Kaitlyn made a cover for a two count as the crowd rallied behind Naomi. Kaitlyn then knocked Naomi to the floor, but Naomi re-entered and scored with a cross body block for a two count.

Vickie nearly blew a gasket screaming at Kaitlyn to impress her. "This is ridiculous!" Vickie shouted. Naomi then hit a big kick to the face and scored a pinfall on Kaitlyn. Cole said she scored a "big, big, big, big, big, big" win. Vickie blew another gasket and screamed at Kaitlyn that she's a disgrace and a waste of her time. Kaitlyn stomped off trying to get away from Vickie, who followed her up the ramp to the back.

Aksana walked up to Goldust with some gold-colored flowers. She said their whole issue is like the Lord of the Rings. Goldust questioned Aksana on this analogy. Goldust said that just because he doesn't have the Million Dollar Belt anymore, she wants to play nice. Goldust said she ripped out his heart. Aksana wanted his help. "I need your help. You husband," she said before doing a puppy-dog face. Goldust consented.

Cole said he wants to get to the bottom of A.J. and Primo's relationship since they seem to know each other so well. A.J. dominated this from the start as Cole surmised A.J. is "weird." Aksana then slipped A.J. to the outside and sat down on the bottom rope to welcome A.J. back into the ring. A.J. took the bait and Aksana dropped her on the ring apron. Cole suddenly got a phone call. Mathews noted he did this bit a few weeks ago. The crowd was hot with an "A.J." line as Cole said he received a phone call from Joey Styles. Cole tried to play the conversation over the air as Mathews tried to call the action in the ring. Cole said he would call Mr. McMahon if he weren't in a coma right now. A.J. suddenly slapped on a tarantula-like submission mid-ring and Aksana was forced to tap out, giving A.J. the win.

Striker was in the ring with the four remaining Rookies for the Diss contest. Striker congratulated A.J. on winning the first competition earlier tonight. She was up first with 60 seconds on the clock. A.J. said it's time to show some spice after showing a lot of sugar. She noted Aksana just tapped out. Also, Kaitlyn stole her shoes. Naomi is athletic, but sometimes her personality is like a drippy faucet. A.J. said this year has been the time the other girls got into the business, but this has been the dream of a lifetime. Cole chanted, "Boring" over and over.

Aksana was next. "Double Double E allowed me to entertainment you," she said. Aksana told Kaitlyn to stay away from her husband. They cut to a shot of Goldust with a completely blank face on his face. Aksana struggled to stay kindergarten telling A.J. she needs to go back to school because she looks like "baby."

Kaitlyn said Aksana doesn't even know what USA stands for. "U Suck Aksana," she said, which prompted a pier-six brawl. Cole said they need Johnny Ace out here to break this up, but he would probably fall on his face. Striker settled things down, but Kaitlyn went back to running down Aksana. Her time expired.

Naomi was next. She said Kaitlyn has nice legs, but her wrestling skills suck. She then mocked A.J. jumping around like Mickie James before asking the crowd what Aksana has in common with Jamie and Maxine. "She's about to be eliminated," Naomi said. Striker then polled the crowd on who dissed the Divas best. Naomi won the crowd approval while Cole was off to the side talking to someone on the front row. A.J. has earned immunity. They'll find out who's going home up soon.

Striker was with the four remaining Rookies and noted A.J. can breathe easy right now. Cue up the drumroll. And the eliminated Rookie is...Aksana.

Aksana pretended to faint as Goldust just stared straight ahead. Aksana grabbed the mic from the floor and said it's a mistake. "Somebody make mistake," she said. Aksana said she will come back. Right now, she will go to Vince McMahon's office and write a letter. And something about emo?

She blew kisses to the crowd and walked up the ramp where Goldust met her. Goldust has one more thing to say to her. Goldust pulled out a piece of paper and said he wants a divorce. She screamed and stormed off while Cole sarcastically said he didn't see that coming. So, it's Naomi, A.J., and Kaitlyn remaining for next week's elimination. Mathews plugged the voting on WWE's website tomorrow before Cole said he's still going to vote for Aksana. Mercifully, fade to black. 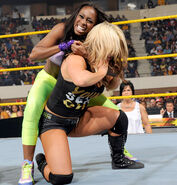