Ushering in “old school” night, legendary announcer “Mean” Gene Okerlund introduced WWE Hall of Famer “Cowboy” Bob Orton, father of the current WWE Champion. When the senior Orton informed the WWE Universe that his son Randy will prevail at Survivor Series this Sunday, his son’s opponent, Wade Barrett, took exception. The leader of The Nexus predicted a much different outcome, one that prompted The Miz to enter the fray.

Mr. Money in the Bank reminded the WWE Universe that he can cash in his title contract at any moment, threatening to keep John Cena in Nexus indefinitely. That threat did not sit well with Cena, who challenged Miz to a match, hoping to ensure that he is in no condition to cash in his contract. After thinking it over, Mr. Money in the Bank finally accepted the challenge.

Prior to his match against Mark Henry, Intercontinental Champion Dolph Ziggler compared himself and his lady friend, Vickie Guerrero, to another Intercontinental couple, “Macho Man” Randy Savage and Miss Elizabeth. Although the comparison seemed about as believable as Ziggler’s hair color, the bottle blond did back up his boasts. He managed to win the interpromotional match by locking in a sleeper hold on The World’s Strongest Man.

After weeks of frustration with his partner’s performance, Tyson Kidd finally decided to bury the hatchet – right in David Hart Smith’s back. Before their non-title bout against WWE Tag Team Champions Justin Gabriel & Heath Slater, The Hart Dynasty duo appeared to be on the mend, agreeing to forego their recent difficulties. During the match, however, just as it appeared Hart Smith was gaining momentum, Kidd booted him in the face and deliberately cost him the match. He then walked off and left his befuddled partner alone in the ring.

The Brooklyn Brawler defeat Ezekiel Jackson? Fuggedaboutit! Accompanied by manager Harvey Wippleman, the old school icon challenged any of the new school Superstars to a match. Unfortunately for him, Jackson appeared more than eager to accept and defeated Brawler in impressive fashion.

Agreeing to a match with John Cena seems easy enough. Actually participating in said match, well, that's when things get a little dicey. Although he was supposed to face Cena, The Miz conveniently begged off, subbing in his apprentice Alex Riley instead. Cena had hoped to hobble The “Cleveland Screamer,” so that he would be unable to cash in his Money in the Bank contract. Instead, Cena made quick work of Riley with a crushing STF.

Afterward, WWE Champion Randy Orton sought retaliation against Miz for ambushing him the week prior. Before The Viper could strike, though, Nexus members Husky Harris and Michael McGillicutty intervened, allowing Miz to scamper away. Disposing of the two “Nexi,” Orton then found himself facing Cena himself. Tensions could not be contained, and the two exchanged blows before a torrent of referees and trainers was able to separate the two. During the simmer, Raw's anonymous GM chimed in and ordered the two Superstars to settle their differences later in the evening during an episode of "Piper's Pit."

The borscht will burst and the risotto runneth over! Vladimir Kozlov & Santino Marella are sure to celebrate after becoming the No. 1 contenders to the WWE Tag Team Titles by defeating The Usos. Not even the encouragement of Tamina and her father, WWE Hall of Famer “Superfly” Jimmy Snuka, could propel Jimmy & Jey over their worldly opponents, who must face champions and Nexus disciples Justin Gabriel & Heath Slater.

George “The Animal” Steele must have been feeling a bit peckish. During an interpromotional bout pitting David Otunga against SmackDown’s Kofi Kingston, the WWE Hall of Famer ambled to the ring and, with a flash of his green tongue, began to devour the stuffing from one of the ring’s turnbuckles. The oddity distracted the Nexus disciple long enough to allow Kingston to take advantage for the win.

Wade Barrett proved he isn't simply a ruthless, petulant leader with a nasally English accent and greasy hair. The guy’s actually got chops. To demonstrate, Barrett faced R-Truth in singles competition and toppled the athletic Superstar. With both WWE Champion Randy Orton and John Cena looking on separately in the locker room area, the Englishman asserted himself just six days before his WWE Title Match at Survivor Series.

A Superstar badmouths the good ol’ U.S. of A. long enough and they'll have Sgt. Slaughter raining down shock and awe. After being introduced by Tito Santana and accompanied to the ring by Chavo Guerrero Sr., Alberto Del Rio began spouting yet another anti-American tirade. Sarge was quickly all over him like camo on a corporal, challenging the Mexican elitist to a match. Although Slaughter ran him through an obstacle course of hurt, the moneyed Mexican still managed to overcome and emerge victorious. In the wake of Del Rio's win, MVP rushed in to aid Sarge and chase off the Mexican menace.

Respect your elders ... or else! With WWE’s “original Diva,” Mae Young, soaking up the well-deserved respect of the crowd, self-proclaimed “Co-Divas Champions” Michelle McCool & Layla couldn't help themselves. WWE’s Mean Girls came out and quickly began ripping on the pioneering Young, who, in turn, challenged Lay-Cool to a No Disqualification Match. McCool & Layla eagerly accepted, but then a host of Raw Divas intervened and crushed Lay-Cool, allowing Young to pin Layla for the win.

After the victory, however, Bryan would not have time to celebrate. Instead, Ted DiBiase bolted in and leveled the U.S. Champion before holding the U.S. Title overhead after earlier rejecting The Million Dollar Title from his father, who had retrieved it from Aksana. His statement made, The “Fortunate Son” then strolled off with his lady friend Maryse on his arm.

When the applause finally receded, the historic lineup of Superstars allowed Piper to welcome his guests, The Viper and The Nexus’ Cena. First out was Cena, who assured his host that, as special guest referee, he would call the WWE Title Match at Survivor Series right down the middle. Upon hearing Cena’s proclamation, Wade Barrett intruded to remind the Legendary star that he will be fired from WWE if the Englishman loses or be free from The Nexus if Barrett wins, all of which means that, depending on the outcome at Survivor Series, it may well have been Cena's final appearance in WWE. Regardless of outcome, Cena, forced to wear the “N”-labeled shirt of his associates, told his overlord that he still plans on pummeling him.

The other Superstar in the volatile equation, WWE Champion Randy Orton, then factored in. The Viper mentioned to Cena that he had wanted to punt him in the skull to eliminate him from referee duties this Sunday. Instead, WWE’s Apex Predator thought it best to sink his fangs into Barrett.

Just as Orton prepared to punt Barrett’s skull, though, Nexus’ reluctant warrior Cena stopped him and was punished with an RKO. Seizing the moment, Barrett once again engaged Orton in battle, only to be felled once more. The brief exchange was just enough to enable a groggy Cena – now the focus of the champion’s punt – to recover and evade The Viper’s charging boot. The Legendary star hit Orton with an Attitude Adjustment, at which point the Englishman ordered his disciple to raise his hand in victory. Big mistake. Cena took umbrage and laid out Barrett with an Attitude Adjustment of his own, a mere six days before Survivor Series.

The turnbuckle pads in a vintage way

The old WWF banner hangs high above the Giant Center 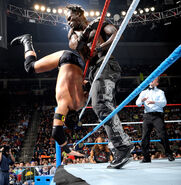 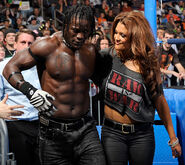 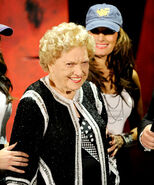 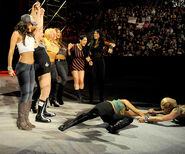 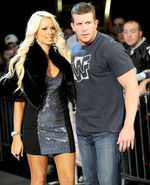 Retrieved from "https://prowrestling.fandom.com/wiki/November_15,_2010_Monday_Night_RAW_results?oldid=1563123"
Community content is available under CC-BY-SA unless otherwise noted.