Triple H was the luckiest man in Indianapolis Monday night.

Maven was the first member of Randy Orton's winning Survivor Series team to be named General Manager of RAW, and he decided to make his one-night-only job a memorable one by giving himself a shot at Triple H's World Heavyweight Championship.

Following the announcement, The Game met Maven in his office and tried to persuade the new GM that he should join Evolution. Maven thought things over, but in the end decided to go for the World Heavyweight Championship.

Evolution members Ric Flair and Batista were ejected from ringside early on in the contest leaving Triple H at a distinct disadvantage since Chris Jericho and Chris Benoit had accompanied Maven to the ring as well.

Triple H survived attacks from Chris Jericho, Chris Benoit and Randy Orton throughout his match with Maven, but in the end he had Gene Snitsky to thank.

After being knocked out by Randy Orton, Snitsky came down to ringside and gave Orton a dose of his own medicine. Then he entered the ring, staring both Triple H and Maven in the face. The red-hot Conseco Field House crowd didn't know whom Snitsky was after, but he answered all of the questions when he gave the big boot to Maven. Triple H then hit the pedigree and the rest was academic.

Triple H escaped the Conseco Field House with Championship by the skin of his teeth, but he had to endure three more weeks of his enemies calling the shots.

While Triple H was able to keep his World Heavyweight Championship, La Resistance was not as fortunate with their World Tag Team Championships. General Manager Maven signed a Triple Threat Elimination match with Eugene & William Regal and Rhyno & Tajiri getting a shot at the belts.

After Rhyno missed a GORE, Sylvan Grenier went for the pin while Robert Conway held Rhyno's leg for the pinfall and the elimination. Later on in the match, while the referee was distracted, Conway hit Grenier with a flagpole by accident. Instead of going right for the pin, Regal tagged in Eugene who hit the People's Elbow for the pin. After the match, Eugene invited four of his youngest and biggest fans into the ring for a celebration.

For the first time in almost three years, one of the most successful tag teams in WWE history were paired up again as Edge and Christian took on Shelton Benjamin and Chris Benoit. Edge didn't hide the fact that he felt he deserved better and should be in a World Heavyweight Championship match, and his frustration was even more clear following the match. After Christian tapped out to the Crossface, Edge took out his anger on his tag-team partner, throwing him into the steel ring post.

Lita was also in action taking on Molly Holly. Unlike Survivor Series, where she broke Trish Stratus’ nose, Lita kept her emotions in check at RAW. After some back-and-forth action, Lita slapped a sleeper hold on Molly and turned it into a rear-naked choke, prompting Molly to tap out. After the match, Stratus came to the ring wearing a protective face mask to cover her nose, and she then complained to Lita. Lita simply shoved Stratus in her injured face, leaving her whining in the ring.

Simon Dean also made another appearance, but this time Rosey took offense to his words over the past couple of weeks and confronted him. 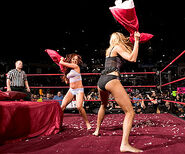 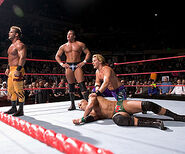 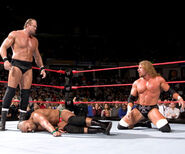 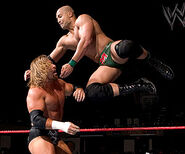 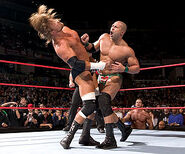 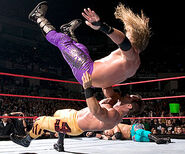 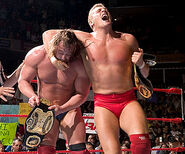 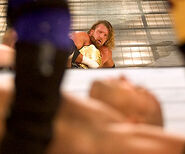 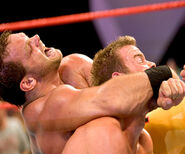 Retrieved from "https://prowrestling.fandom.com/wiki/November_15,_2004_Monday_Night_RAW_results?oldid=1581497"
Community content is available under CC-BY-SA unless otherwise noted.