Last week, The New Day's “Under Siege: Part II” led to the defrocking of Dean Ambrose & Seth Rollins as Raw Tag Team Champions and more than a little embarrassment for Raw General Manager Kurt Angle, who failed to prevent SmackDown LIVE from infiltrating Raw for the second time. However, with Roman Reigns back in the game after an illness, The Hounds of Justice are coming to collect.

Furious over Angle's selection of Jason Jordan to Raw's Survivor Series team (SmackDown LIVE answered by picking John Cena) and unimpressed with his promise to start the Survivor Series match himself, Raw Commissioner Stephanie McMahon was seemingly about to fire The Olympic Hero. Before she could get the words out, however, The Shield emerged and vouched for the WWE Hall of Famer as a leader. And as for The New Day making “fools” of The Hounds last week, as Stephanie stated? Reigns had an idea of his own: A fight between the two teams at Survivor Series. And The New Day accepted. Hounds vs. Unicorns it is.

The road to Survivor Series was touch-and-go for a while with Bayley, but The Huggable One is heading back to WWE's fall classic. One week after Women's captain Alicia Fox named Sasha Banks (but not Bayley) to her team, the former Raw Women's Champion scored a clutch win over Mickie James and Dana Brooke to claim the final slot on the Women's team.

Clutch being the operative word because the ringside presence of the rest of the team — Fox, Banks, Asuka and Nia Jax — ended up being a deciding factor when Dana forearmed Asuka in the face, setting up a retaliatory strike from The Empress of Tomorrow that took Brooke out of contention. Mickie attempted to pounce with the DDT, but Bayley reversed it into an emphatic Bayley-to-Belly, and that was all she wrote.

Enzo Amore's second stint as WWE Cruiserweight Champion has been marked, more or less, by a rotating door of Superstars looking to beat him up. But it was good news on Raw for Muscles Marinara, who, along with Drew Gulak, scored a win over his challenger Kalisto in tag team action.

It was a remarkable reversal of fortune, too, given that an accidental collision between Gulak and Enzo set the team up for a one-two combo of a Kalisto plancha to the outside and a suicide headbutt from his partner, Akira Tozawa. Moments later, however, Gulak redeemed himself by rescuing the champ from Tozawa's big senton, and Enzo threw The Stamina Monster into his own partner to tee Tozawa up for the JawdonZo.

Given the confusion, Kalisto (who'll also celebrate his birthday tomorrow on 205 Live) can hardly lay the blame at his feet alone for the loss. But as he prepares to challenge Enzo for the title on Survivor Series Kickoff, he heads into the match on a down note all the same.

Just hours after Stephanie McMahon questioned Jason Jordan's qualifications to be a part of Team Raw at Survivor Series, the former SmackDown Tag Team Champion proved himself against the tallest of odds — and he paid the price accordingly.

Facing Bray Wyatt, Jordan wasn't just up against The Eater of Worlds’ superlative abilities, but also the lingering perception that he didn't deserve to suit up against the likes of John Cena, Randy Orton and Shinsuke Nakamura. He overcame both obstacles, staring down Wyatt's ghoulish mind games with a stone face and battling through an assault on his left knee to reverse Sister Abigail into a rollup pin. The elation was short-lived, however, as The Reaper of Souls struck Jordan down with a ferocious attack to the same leg, leaving Jordan to limp agonizingly into the locker room.

03:48 Brock Lesnar and Paul Heyman didn't have too many kind words for Jinder Mahal when he was WWE Champion. AJ Styles, however, is another story. Six days after The Phenomenal One upended Mahal to win his second WWE Championship, The Conqueror and his advocate weighed in on Lesnar's new opponent for the Champion vs. Champion clash at this Sunday's Survivor Series.

And their response was ... positive? They certainly gave more props to Styles than they afforded The Modern Day Maharaja, but at the end of the day, Team Brock's evaluation of their opponents is only positive to a certain degree.

Undeterred by even the sight of an audience member proposing in the middle of his sermon, Heyman spoke miles of praise for The Phenomenal One by way of a five-point selling plan for Survivor Series: 1) It's the only time the match might happen; 2) Styles is faster than Lesnar; 3) Styles is the “most talented performer of his generation” and the “ultimate opponent” for The Beast; 4) his title run is a “Rocky movie come to life.” However, the road ended in a familiar prophecy for The Phenomenal One when it came to selling point F-5: That even Styles' best efforts would still end in beating, victimization and conquering at the hands of Lesnar.

It's official: They're back. In their first Six-Man Tag Team Match in over three years, The Shield got back to business in absolutely ferocious fashion, making a meal of The Miz, Cesaro & Sheamus, sending themselves into battle against The New Day on a high note and turning their opponents' tough talk on an earlier “Miz TV” on its head.

Well, in fairness, The A-Lister (who's got either Baron Corbin or Sin Cara lined up for Sunday) and The Bar (staring down The Usos) did get a leg up on The Hounds of Justice with a surprisingly coordinated plan of attack. But the three champions' lead over The Shield was as tenuous as the countless other Six-Man teams who have tried them, and once The Shield disposed of The Bar with a Superman Punch (to Cesaro) and Dirty Deeds (to Sheamus), Dean Ambrose and Seth Rollins fed Miz into a Spear from Roman Reigns before all three put him away with the bone-crunching Triple Powerbomb.

With Jason Jordan injured by Bray Wyatt and unable to compete at Survivor Series, Raw General Manager Kurt Angle found himself facing a tough executive decision — only he wasn't the one who ended up making it.

Angle came to the ring to break the news that Jordan's injury would take him out of Sunday's match, but the pleas of his son stopped The Olympic Hero from naming his substitute. As Angle struggled with his words, the plot quickly thickened when Triple H resurfaced on Raw for the first time since WrestleMania and took matters into his own hands, announcing himself as the final member of Team Raw.

As the final insult to Angle, The King of Kings then delivered a brutal Pedigree to the distraught Jordan. Just six days before Raw and SmackDown compete in head-to-head competition, it seemed the battle lines were drawn and the pieces were set. But now, the game has changed.

The animosity between Finn Bálor and Samoa Joe last week led many to question whether they could coexist at Survivor Series, so understandably, their soft launch as teammates on Raw was regarded with a certain amount of trepidation. Luckily for them, the two former NXT Champions made it through their match with Luke Gallows & Karl Anderson victorious, if not entirely seamless, as Joe shoved Finn to the mat before the match even began.

Rough start aside, the two have experience as allies — they're the inaugural winners of NXT's Dusty Rhodes Tag Team Classic — and they drew heavily upon that history to hold the good brothers at bay. Some clever chicanery with the ref gave Gallows & Anderson some breathing room, but a rampage from Joe bailed Bálor out of trouble and set him up for the extraordinary Coup de Grâce on Anderson.

However, Joe left the ring the second the ref's hand counted three, a clear demonstration that his alliance with Bálor is out of necessity, and anything is fair game the second that necessity ends.

Ordinarily, Braun Strowman shows up and demands competition. But after weeks of being targeted by Kane, he had a more specific demand in mind: He wanted The Big Red Machine, and while what ended up happening didn't resemble a victory in the traditional sense, Strowman never said anything about beating Kane in a match.

What he did do was beat The Devil's Favorite Demon around the ring with savage abandon, using his fists and a steel chair to send the former WWE Champion scurrying for cover. He even nearly superplexed Kane through a table on the outside, though The Big Red Machine evaded that grisly fate. Instead, Strowman ultimately hoisted his hellish foe his shoulders and delivered a Running Powerslam that drove both men through the canvas of the ring, and all this despite the match never officially starting.

In a way, perhaps, that's the most emphatic victory Strowman could ever achieve over Kane: As The Big Red Machine knows better than anyone, it's one thing to defeat a man in the ring. It's another to send him to hell.

The Shield address The New Day 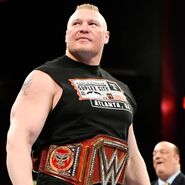 The Shield vs. The Miz & Cesaro & Sheamus

Retrieved from "https://prowrestling.fandom.com/wiki/November_13,_2017_Monday_Night_RAW_results?oldid=1563107"
Community content is available under CC-BY-SA unless otherwise noted.