Right music, wrong Superstar. Ric Flair and Batista practically rejoiced when Triple H's theme song hit the loudspeakers during Monday Night RAW from Peoria, Ill. At the time, the Evolution members had their hands full in a Handicap Match against Chris Jericho, Randy Orton and Maven. But when the smoke cleared, it was none other than Tajiri in a blond wig posing as the World Heavyweight Champion. Flair and Batista had attacked Tajiri earlier in the night. His revenge was both swift and humorous. However, Batista and the Nature Boy weren't laughing. Moments later, Batista would get hit with an RKO, as Evolution had yet another rough night on RAW. Things could get worse at Survivor Series.

RAW General Manager Eric Bischoff, not a big Evolution fan himself these days, scheduled a classic 8-man elimination tag team match that pitted Jericho, Orton, Maven and Chris Benoit vs. Triple H, Batista, Edge and Gene Snitsky. Flair was left out on purpose on the whim of Bischoff, who added a very special stipulation: Beginning the day after Survivor Series, the winning team would run RAW as Bischoff took a month-long vacation.

Triple H never appeared in the ring, making his only appearance via video. He told the entire RAW roster to shape up and realize The Game was their meal ticket.

Meanwhile, La Resistance regained their World Tag Team Championship in unique fashion. La Resistance was supposed to take on the team of Edge & Chris Benoit Monday night. But Edge decided to spend the match promoting his book with Jim Ross and Jerry Lawler. And just when Benoit seemed poised to beat La Resistance by himself again, Edge distracted the referee while Benoit was hit by the Au Revoir.

Edge wasn't through, however. Obviously still upset about being snubbed by the fans at Taboo Tuesday, Edge mounted a merciless post-match attack on the exhausted Benoit, capped by applying the Crippler Crossface, forcing The Rabid Wolverine to tap out to his own submission move.

Women's Champion Trish Stratus was set to defend her championship against Lita. Trish wasted no time beginning the war of words, trashing Lita's career during an in-ring segment Monday, luring Lita out to defend herself. But Gail Kim was there to help Trish send a punishing message to Lita.

Also, Christian would face Intercontinental Champion Shelton Benjamin in a battle of young and hungry Superstars. Christian defeated The Hurricane Monday and then had a surprise for Benjamin. With Tyson Tomko out, Viscera served as Christian's one-night only 500-pound Problem Solver. Viscera would manhandle Benjamin, who later in the show had the guts to challenge the massive hired gun to a match, ultimately winning the contest to the dismay of Christian. 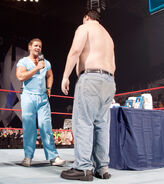 Retrieved from "https://prowrestling.fandom.com/wiki/November_1,_2004_Monday_Night_RAW_results?oldid=1563040"
Community content is available under CC-BY-SA unless otherwise noted.