Night of Champions at WWE.com
Night of Champions was a professional wrestling pay-per-view (PPV) event produced by professional wrestling promotion World Wrestling Entertainment (WWE). The event was promoted as Vengeance until the 2008 edition. The event was created in 2001, with its inaugural event taking place on December 9, 2001 at the San Diego Sports Arena in San Diego, California, replacing Armageddon for that year due to the possible insensitivity of the latter's name with respect to the September 11 attacks. The 2002 event featured the Raw and SmackDown! brands. The event was made exclusive to the SmackDown! brand in 2003 and in 2004 was made exclusive to the Raw brand. In 2007, following WrestleMania, all PPV events became tri-branded.

Night of Champions dates and venues 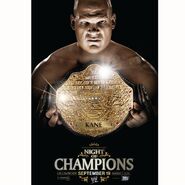