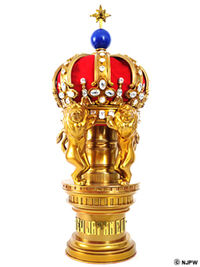 The New Japan Cup (often abbreviated NJC) is an annual single-elimination professional wrestling tournament held by New Japan Pro Wrestling. Originally intended for every April, it was rescheduled to March in 2007. Though NJPW also runs the annual G1 Climax tournament, the NJC is different in that it is single-elimination, whereas the G1 is a round-robin. Like the G1 however, the winner of the tournament receives a shot at the IWGP Heavyweight Championship; this stipulation was added in 2006. In 2014, the winner was given the right to choose whether to challenge for the IWGP Heavyweight or the IWGP Intercontinental Championship. The following year, the winner could have also chosen to challenge for the NEVER Openweight Championship. The 2019 edition was also exclusively for the Heavyweight Championship, as the winner would headline the G1 Supercard at Madison Square Garden.

The 2005 New Japan Cup was held from April 19 to April 24. The first two rounds were held on individual nights, with round one taking up the entire card on April 19.

† Minoru was forced to pull out before his Round 2 match, due to suffering severe dizziness, and was replaced by Osamu Nishimura, who he beat in Round 1.

The 2006 New Japan Cup was held from April 16 to April 30. Giant Bernard, the winner of the tournament, went on to fail in his challenge against IWGP Champion Brock Lesnar on May 3.

The 2007 New Japan Cup was a 14-man tournament held from March 3 to March 21. Giant Bernard and Hiroyoshi Tenzan received byes to the second round, due to their victories in the 2006 New Japan Cup and G1 Climax respectively. Shinsuke Nakamura was injured in a non-tournament match on March 13, giving Tenzan an additional pass to the semifinals. The winner, Yuji Nagata, went on to defeat Hiroshi Tanahashi for the championship on April 13, beginning his second reign with the title. He also became the first person to reach the NJC finals twice, and the first to win both the New Japan Cup and G1 Climax.

Retrieved from "https://prowrestling.fandom.com/wiki/New_Japan_Cup?oldid=1742112"
Community content is available under CC-BY-SA unless otherwise noted.