The NXT House Show is a House show produced by World Wrestling Entertainment which took place on February 17, 2017 in Tampa, Florida.

(c) refers to the champion(s) heading into the match. 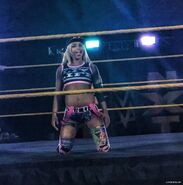 Retrieved from "https://prowrestling.fandom.com/wiki/NXT_House_Show_(Feb_17,_17%27)?oldid=1684463"
Community content is available under CC-BY-SA unless otherwise noted.