The NEVER Openweight Six Man Tag Team Championship is a professional wrestling Championship owned by the New Japan Pro Wrestling (NJPW) promotion. NEVER is an acronym of the words "New Blood", "Evolution", "Valiantly", "Eternal", and "Radical" and was a NEVER, which featured younger up-and-coming talent and outside wrestlers not signed to the promotion. The title will be NJPW's seventh active championship and the second to carry the NEVER name, following the NEVER Openweight Championship, which was introduced in November 2012. The championship will be contested for by teams of three wrestlers and is the first title of its kind in the history of NJPW. Since its creation, the championship has been won by many teams in a short period of time. 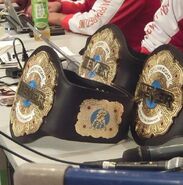 Retrieved from "https://prowrestling.fandom.com/wiki/NEVER_Openweight_Six_Man_Tag_Team_Championship?oldid=1720533"
Community content is available under CC-BY-SA unless otherwise noted.