The Minnesota Wrecking Crew was originally a professional wrestling tag team that was formed by Gene and Lars Anderson but since then has featured a number of wrestlers who wrestled under the Anderson family name despite not being blood related.

Gene Anderson formed the original Minnesota Wrecking Crew with Lars Anderson in 1965 . They wrestled throughout the country in the late 60's with moderate success until Lars left to live in Hawaii. 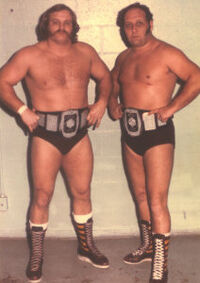 In 1969 Gene then brought in Alan Rogowski, and renamed him Ole Anderson. They dominated tag team wrestling in the 1970s, winning the NWA World Tag Team Titles 8 times. Over those years, Lars Anderson was on occasion brought back in as part of this team.

This version of the The Crew was the longest running and most successful version, they won NWA 8 World Tag Titles Mid Atlantic, 1 NWA World Tag Title, Georgia Championship Wrestling, 10 Mid Atlantic Tag Titles, 12 Georgia Tag titles, and in total over 90 tag titles in the almost 10 years together.

When Gene stopped wrestling in 1981 to manage, the team was disbanded. Alan continued to wrestle as Ole Anderson.

Revival of the Minnesota Wrecking Crew

In 1985, Ole was part owner with Jim Barnett of Georgia Championship Wrestling when Jim Crockett Promotions bought them both out. Ole had also been GCW booker plus also shared announcing duties with Gordon Solie on the Georgia Championship wrestling TV program. With the change of ownership Ole's position as announcer was going to David Crockett and his position as booker was going to Dusty Rhodes so Ole's storyline changed. At this time the team of Ole and Thunderbolt Patterson were National Tag Team champions and were wrestling as baby faces along with Ole supporting Tommy Rich, Dusty Rhodes and others with their feuds with the heels in the company. Ric Flair had met journeyman wrestler Marty Lunde when Marty acted as Flair's driver in Florida, Flair not could believe Marty's resemblance to Ole. Flair recommended Marty to Ole who after meeting with Marty then sent Marty to CWF for seasoning. After wrestling first as Mr Olympia tag partner Super Olympia the two Olympia's had a feud where they unmasked each other and Marty was revealed as "Arn Anderson" of the Anderson clan and Mr. Olympia as Jerry Stubb.

Arn and Jerry were brought into Atlanta together as a team wearing matching Panama hats in place of their masks. Over the next several weeks Gordon Solie slowly built up Arn's credibility as an Anderson with Ole slowly coming along and being more and more impressed by Arn's abilities. Ole was then replaced at the podium position by David Crockett so Ole would now come out to ringside and observe Arn's matches. Ole became so impressed by Arn's carrying on the Anderson's hard as nails heel ethics that it caused a split between him and Thunderbolt. T-bolt came out to the announcers podium complaining of Ole's vocal support of Arn after Arn broke a prelim wrestlers arm during a TV match. Ole told T-bolt that after watching Arn these last few weeks he saw how things could be for him & Arn as a team and that he was tired of "carrying" T-bolt, Tommy Rich, Dusty Rhodes and others. He told T-bolt that they were done as a team and the next time T-bolt saw Ole to "Look Out".

Later during a TV match between Arn & Many Fernandez (who had come to the rescue of the prelim wrestler whose arm Arn had broke the week before) Ole came to the ring side to yell instructions to Arn. Manny became upset with Ole's advising Arn during the match and confronted Ole. Arn took advantage of the distraction and kneed Manny in the back dumping Manny through the ropes to Ole's feet. Ole helped Manny to his feet looking to throw him back into the ring so Manny attacked Ole. Arn jumped Manny from the ring to start helping Ole. The two beat Manny down to the concrete floor before Thunderbolt came out to confront Ole in front of the podium. Arn then jumped T-Bolt as T-Bolt was arguing with Ole, Arn attacked and then dragged T-Bolt into the ring and Arn at first fought T-bolt alone. As T-bolt started to get the better of Arn, Ole jumped into the ring and held on to T-Bolt and then helped Arn stomp him until the Ragin Bull rescued him. Video of the turning of Ole against T-bolt

Ole and Arn became founding members of the original Four Horsemen as the Minnesota Wrecking Crew. They disbanded in 1987 when Ole was kicked out of the 4 Horsemen and replaced with Lex Luger.

Arn and Ole revived the Minnesota Wrecking Crew in 1990 but it lasted for only a few months before Ole retired.

The Minnesota Wrecking Crew's history is covered in a chapter dedicated to the team in the book The Pro Wrestling Hall of Fame: The Tag Teams

Retrieved from "https://prowrestling.fandom.com/wiki/Minnesota_Wrecking_Crew?oldid=1561448"
Community content is available under CC-BY-SA unless otherwise noted.