The May 9, 2017 Edition of Smackdown Live is a Professional wrestling television show of the WWE's Smackdown brand, which took place on May 9, 2017 at the O2 Arena in London, England.

The WWE Championship picture between titleholder Randy Orton and Jinder Mahal intersected with the brewing rivalry between United States Champion Kevin Owens and AJ Styles. The Maharaja, flanked by The Singh Brothers, and The Viper got into a war of words before KO and The Phenomenal One each made their way out and started tossing verbal jabs as well. Baron Corbin then made his presence felt, but before he could hit the ring, Sami Zayn bombarded him to get revenge for The Lone Wolf's attack on The Underdog from The Underground on WWE Network's Talking Smack two weeks ago.

This led to a melee between all the Superstars with Orton, Styles and Zayn holding off Mahal, Owens, Corbin and The Singh Brothers ... for now.

With the “welcoming committee” by her side, Natalya took on Becky Lynch, who had SmackDown Women's Champion Naomi in her corner, in front of the UK faithful on Team Blue. However, before the contest could begin, Charlotte Flair came out to seemingly even the odds further and watch The Irish Lass Kicker's back.

The two Superstars engaged in a hard-hitting affair, but Natalya caught Lynch off-guard for the victory when The Irish Lass Kicker was distracted by a disconnect between Naomi and Flair, who were trying to keep Carmella, James Ellsworth and Tamina at bay.

The rivalry between former Wyatt Family disciples Luke Harper and Erick Rowan was renewed on SmackDown LIVE, as the two behemoths collided.

With no leaders or restrictions to follow, the two let it all out on the blue brand. After seemingly consulting with the ominous mask he walks out to the ring in, Rowan snuck in a thumb to Harper's eye behind the official's back before finishing off his former “brother” with an incredibly impressive power maneuver.

Dolph Ziggler and Shinsuke Nakamura's ongoing conflict continued in the UK, as The Showoff called out The King of Strong Style for not yet having a match on SmackDown LIVE. Nakamura retorted by telling Ziggler that he was ready to show him what he was made of right then and there. A referee rushed to the ring, and it looked like Dolph was going to take him up on the offer for a match. However, Ziggler quickly rescinded and said that they would do this on his terms — at WWE Backlash.

The Showoff then tried to get the jump on The Artist Known as Nakamura, getting a few licks before The King of Strong Style rallied back, hitting Ziggler with some hard strikes and clearing him out of the ring.

The No. 1 contenders to the SmackDown Tag Team Championship, Breezango tried to keep the momentum going against The Ascension on Team Blue.

Konnor & Viktor attempted to use their size and strength advantages to keep Tyler Breeze & Fandango down, but Fandango hit The Last Dance onto Viktor to pick up the win for The Fashion Police.

After the match, SmackDown Tag Team Champions The Usos came out to try to get in the heads of their challengers, suggesting that Breezango would be in for more than they could handle in 12 days at WWE Backlash in Chicago.

After the pure carnage that kicked off the show, these two sides squared off in official fashion in the main event of SmackDown LIVE.

The action was fast-paced and intense as the two squadrons waged battle. As the match reached its final stages, it appeared that The Apex Predator was in an untouchable zone, battling through attempted interference from The Singh Brothers and even connecting with the RKO on Kevin Owens.

However, there were just too many hoops to jump through, as The Maharaja swooped in and connected with the Cobra Clutch Slam immediately following The Viper's takedown of Owens.

With the victory, Mahal made a massive statement heading into WWE Backlash: He's ready to take Orton's title. 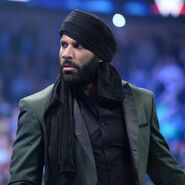 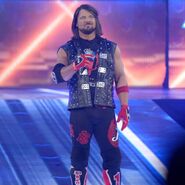 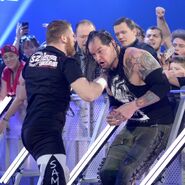 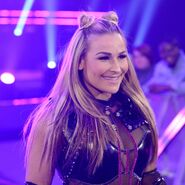 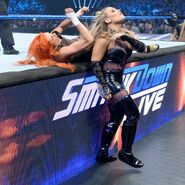 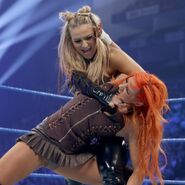 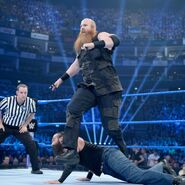 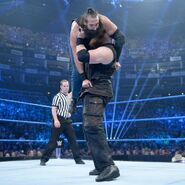 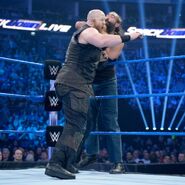 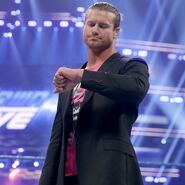 Breezango vs. The Ascension 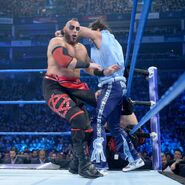 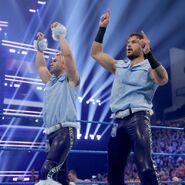 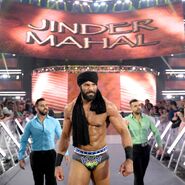 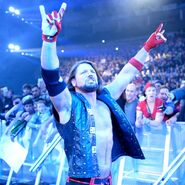 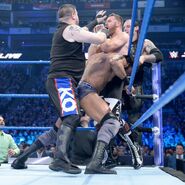 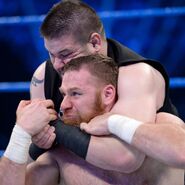 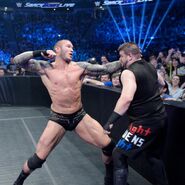 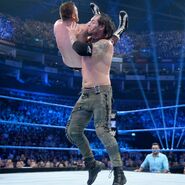 Retrieved from "https://prowrestling.fandom.com/wiki/May_9,_2017_Smackdown_results?oldid=1560939"
Community content is available under CC-BY-SA unless otherwise noted.