The May 8, 2018 Edition of Smackdown Live is a Professional wrestling television show of the WWE's Smackdown brand, which took place on May 8, 2018 at the Royal Farms Arena in Baltimore, Maryland.

SmackDown LIVE General Manager Paige kicked things off on the blue brand and quickly looked back to the events of WWE Backlash, then began to look forward to the upcoming WWE Money in the Bank event and its two Money in the Bank Ladder Matches. Tonight, several bouts would feature male and female Superstars attempting to qualify for the clashes, including the match that was about to begin — United States Champion Jeff Hardy vs. The Miz.

Miz and Hardy both came out firing, with The Charismatic Enigma looking to build off his win this past Sunday against Randy Orton, and The A-Lister was attempting to bounce back after his nail-biting defeat to Seth Rollins in the Intercontinental Title Match at WWE Backlash. In the pivotal moments, Miz was in dire straits when Hardy hit the Twist of Fate and Swanton Bomb. However, incredibly, Miz used Hardy's momentum against him, countering the pin attempt into one of his own to get a surprising three-count for the win, becoming SmackDown LIVE's first entry into the Men's Money in the Bank Ladder Match.

Never afraid to fuel the flames, The IIconics prepped for Peyton Royce's Women's Money in the Bank Qualifying Match against Charlotte Flair by delivering a pre-match address from the stage and ridiculing The Queen for losing her title match against SmackDown Women's Champion Carmella at WWE Backlash.

Royce and Billie Kay's antics only fueled an already motivated Flair, who came out swinging (and chopping) early in the contest. However, it appeared the numbers game would be too much for Charlotte to overcome, as Kay constantly landed cheap shots behind the referee's back, but Kay's meddling nor Royce's counter of Charlotte's signature moonsault were enough to keep The Queen down.

Ever resurgent, Charlotte weathered Royce's best and forced her to tap to the Figure-Eight to join Raw's Ember Moon in the Women's Money in the Bank Ladder Match.

Xavier Woods defeated Sheamus last week in what was considered an upset by many. The New Day added some salt (or syrup, if you'd rather) to The Bar's bruised egos by loading up the former Raw Tag Team Champions’ gym bags with pancakes earlier in the evening, which prompted Sheamus to egg Cesaro on to challenge Woods tonight.

Because of this, Cesaro was more than annoyed when it came time for his one-on-one match with Xavier. Feisty as always, Woods overcame his size and strength disadvantages with a relentless amount of fight, heart and his dynamic athleticism. Both Sheamus and The New Day got involved in the contest, with Big E and Kofi Kingston eliminating Sheamus from the equation after pelting him with pancakes and wiping him out with a leap from the apron, respectively. However, that wasn't enough for Woods, as Cesaro earned the win by catching his opponent with a brutal uppercut when Woods was attempting his diving elbow drop.

Last week, Paige made it clear to Mandy Rose and Sonya Deville that their former contingent, Absolution, was officially dead. However, if the picture wasn't yet clear for Rose and Deville, the SmackDown LIVE General Manager hammered the point home when she informed Deville that she was barred from ringside for Mandy's matchup against Becky Lynch, who's been attempting to work her way out of a slump over the past several weeks.

With no Sonya in Rose's corner, The Irish Lass Kicker fought freely, not having to look over her shoulder for an attack from The Golden Goddess’ running mate. However, in what has to be considered a major upset, Mandy Rose defeated the former SmackDown Women's Champion in her first match on the blue brand, countering a kick from Lynch into a surprise rollup for the win.

Becky's slump continued, while Mandy more than proved her mettle on her own.

With a coveted spot in the Men's Money in the Bank Ladder Match on the line, Daniel Bryan took on Rusev in the main event of SmackDown LIVE.

With Aiden English hovering at ringside, Bryan and Rusev engaged in a knock-down, drag-out brawl as Bryan attempted to build on the momentum of his win over Big Cass at WWE Backlash while simultaneously fighting through the injuries he suffered during the seven-footer's blindside attack after the bout.

Rusev barreled down on Bryan with a barrage of strikes, and Aiden English was there to get Rusev out of dodge when he needed it most. In the match's pivotal moment, Bryan, who's ribs were clearly worse for wear after all the punishment he's suffered over the past several weeks, charged Rusev, but The Super Athlete nailed him square in the compromised body part. The Super Athlete followed up with a kick square to Bryan's jaw for the win to claim his place in the Men's Money in the Bank Ladder Match.

The Miz vs. Jeff Hardy 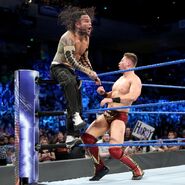 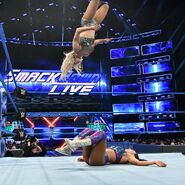 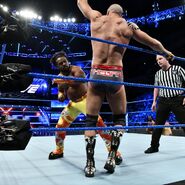 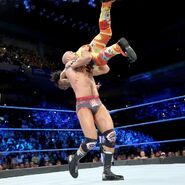 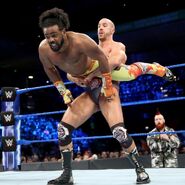 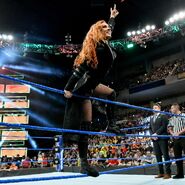 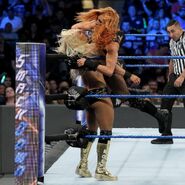 Retrieved from "https://prowrestling.fandom.com/wiki/May_8,_2018_Smackdown_results?oldid=1560932"
Community content is available under CC-BY-SA unless otherwise noted.