The May 7, 2012 Edition of RAW is a Professional wrestling television show of the WWE's RAW brand, which took place on May 7, 2012 at Greensboro Coliseum Complex in Greensboro, North Carolina.

Raw and SmackDown General Manager John Laurinaitis showed no remorse for his ruthless assault on John Cena at the end of last week's Raw. The GM said he wasn't punished by the Board of Directors for his actions, which he claimed was justified because The Cenation Leader tried to undermine his authority and ridicule his leadership skills. Laurinaitis mandated that Cena not appear live tonight and instead undergo rehabilitation so he doesn't have an excuse why he will lose to him at WWE Over the Limit.

Laurinaitis then revealed that the reason his voice sounds so hoarse is because he was injured in a match against "Dr. Death" Steve Williams in Tokyo, Japan. Showing off images of his in-ring action on the TitanTron, Laurinaitis boasted that, when he performed in Japan, he was Hulk Hogan, "Stone Cold" Steve Austin and The Rock, all rolled into one dominant competitor.

Before Laurinaitis could get any further, WWE Champion CM Punk came out to the ring to confront the cocky General Manager. Punk blasted Laurinaitis for losing touch with the people, despite all the GM's bragging that he's the brains behind "People Power." The Straight Edge Superstar's sharpest jab of all came when he told Laurinaitis the reason he went to Japan is because no one in America ever wanted to see him compete.

Angered by Punk's verbal barbs, Laurinaitis made a big match for Raw SuperShow tonight, pitting the WWE Champion against the fearsome Lord Tensai.

Before Big Show's match, he accidentally bumped into an irate John Laurinaitis, who chastised The World's Largest Athlete for not looking where he was going. Big Show was then caught red-handed by Executive Administrator Eve while he made fun of Laurinaitis' voice.

Still upset by his loss to Cody Rhodes at Extreme Rules, Big Show unleashed on the Intercontinental Champion with a flurry of slaps and punches. Rhodes wriggled out of trouble with a Disaster Kick, but soon found himself on the receiving end of more of Big Show's punishment. Looking for an easy escape, Cody rolled out of the ring, asked for his Intercontinental Title and headed back up the entrance ramp.

Following Big Show's victory by way of count-out, Eve came out to reprimand him for making fun of Laurinaitis' voice and demanded an apology from The World's Largest Athlete. Big Show apologized for mocking Laurinaitis, but Eve wasn't satisfied there, and proceeded to humiliate Big Show before he apologized a second time for his actions.

Kofi Kingston, one half of the newly minted WWE Tag Team Champions, had his hands full with Dolph Ziggler early on in this matchup. The Dreadlocked Dynamo fed off the energy of the Greensboro crowd, though, and powered back with a mighty S.O.S.

But when Kofi looked to nail a high-risk maneuver off the second rope, Jack Swagger shoved Kingston to the canvas, allowing Ziggler to capitalize with the Zig Zag for the victory.

John Cena appeared live via satellite from Tampa, Fla., where The Cenation Leader is rehabbing his arm injury. Cena said a group of doctors have strongly recommended he not compete for the next couple of months. However, he's ignoring their advice and fully plans to clash with John Laurinaitis at WWE Over the Limit.

The Cenation Leader claimed that the Board of Directors wanted to fine the General Manager, but he told them to forgo any disciplinary action because the only fitting punishment for Laurinaitis is to get beaten and embarrassed at Over the Limit.

Beth Phoenix appeared at ringside to provide scathing commentary while her opponent at Over the Limit, Divas Champion Layla, dished out a heaping of hurt on Maxine in the ring. With The Glamazon looking on, Layla executed The Layout neckbreaker as she cruised to a convincing victory alongside tag team partner Kelly Kelly.

Sheamus didn't let a shoulder injury inflicted by Daniel Bryan hold him back in this fiery tag team clash. After Randy Orton went to work on Chris Jericho, The Great White followed with some painful shots of his own as pounded his fist into Jericho's chest. Jericho and Alberto Del Rio soon found a way to exploit Sheamus' injury, however, when The Celtic Warrior missed the mark with a running shoulder block into the steel ring post. Finding a second wind, Sheamus scrambled to the corner and tagged back in The Viper, who tried his hardest to fight off persistent double-team efforts from Del Rio and Jericho.

In a stunning exchange, Sheamus hit Jericho with the Irish Curse backbreaker after he was tagged back into the match, and Orton promptly knocked Del Rio out of the contest with a thunderous RKO. But perhaps feeling the effects of his shoulder injury, Sheamus then inadvertently crushed Orton with a Brogue Kick, and Jericho quickly landed a Codebreaker on The Great White to pull off the victory. After the crazy finish, Sheamus tried to lift his tag team partner back to his feet, but The Viper responded by drilling Sheamus with an RKO.

Their adrenaline still running high, all four Superstars in the tag team contest vented in John Laurinaitis' office before engaging in a wild brawl. The Raw and SmackDown GM announced Sheamus will defend his World Heavyweight Title in a Fatal 4-Way Match against Del Rio, Jericho and Orton at WWE Over the Limit.

Did The Miz potentially discover the blueprint to defeating Brodus Clay?

The Awesome One gave Brodus an earful of trash talk before wearing him down with everything from a suffocating headlock to a vicious Skull Crushing Finale. But right when it looked like The Funkasaurus would finally suffer his first loss, he overwhelmed The Miz with his impressive strength and finished him off with Ah Funk It!

Brock Lesnar was extended an invitation to explain his shocking assault on WWE COO Triple H, but Brock was nowhere to be found Monday night on Raw SuperShow. Instead, Brock's representative, Paul Heyman, came out to the ring to address his client's feelings and read a powerful statement from Lesnar.

Heyman stated Brock was maligned and underappreciated by the WWE audience since day one, and that especially holds true for corporate management. Heyman also said Brock feels betrayed because his contract demands were not met, and that he deserves to feel that way because he's the only man to ever win the WWE Championship, the UFC heavyweight championship and an NCAA Division I wrestling championship. Heyman claimed that, above all else, Brock is an "honest man," since he vowed that he would hurt people in WWE and he did.

Heyman said Brock asked him to personally appear and read a statement. In the written address, Brock took shots at Triple H, saying the WWE COO is jealous of him, and expressed anger at how he has been treated in WWE. The statement concluded with a stunning revelation: Brock has quit WWE and "will never be coming back."

Before the main event, John Laurinaitis announced that the CM Punk vs. Lord Tensai contest was now a 2-on-1 Handicap Match, with Punk taking on both Tensai and Daniel Bryan.

The WWE Champion had his work cut out for him, as Tensai blasted and mangled Punk early with a series of power moves. Punk mounted a rally after Bryan missed with a flying headbutt off the top rope, but the strength in numbers would soon prove to be too much for The Straight Edge Superstar to overcome. As Punk went to the top turnbuckle, a lurking Bryan sent him flying with a shove, and Tensai took full advantage by squeezing The Second City Savior's head like a vice with a green mist-filled claw.

Adding insult to injury, Bryan snapped the "Yes!" Lock onto Punk following the 2-on-1 victory and berated the helpless WWE Champion. If we've learned one major lesson from this Raw SuperShow, it's that Laurinaitis is hell-bent on making Superstars pay dearly for crossing him.

Laurinaitis was ripped by Punk 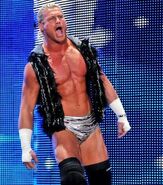 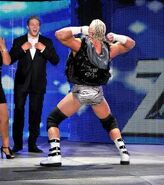 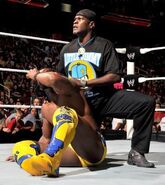 Cena on his medical condition

Retrieved from "https://prowrestling.fandom.com/wiki/May_7,_2012_Monday_Night_RAW_results?oldid=1256956"
Community content is available under CC-BY-SA unless otherwise noted.