Much has changed since NXT's last event in Orlando. All three championships have changed hands, with Samoa Joe standing atop the mountain as NXT Champion. The rest of the roster is scrambling for the right to challenge for the titles, but as NXT becomes the place to be in sports-entertainment, the NXT Superstars are finding themselves competing with new challengers from outside the ranks of WWE.

New NXT Champion Samoa Joe kicked off the show, making his first appearance at Full Sail University since capturing the title from Finn Bálor two weeks ago in Lowell, Massachusetts. Declaring himself a man of his word, the submission specialist said it was only inevitable that he would be champion. Joe said that if anyone had a problem with him, he would be more than happy to put them in their place.

Those words would soon be put to the test, as Eric Young made his surprise debut! The former heavyweight champion, currently one of the hottest free agents in sports-entertainment and a familiar face from Joe's past, introduced himself as a collector of championships. Young went onto say that while Joe brought about change, he would change Joe's fortunes in an instant. The NXT Champion didn't take kindly to those words, promising to crush Young the next time they crossed paths.

Tessa Blanchard, daughter of Tully Blanchard, may have a Hall of Fame pedigree, but that only got her so far against the powerful Nia Jax. The towering competitor muscled Tessa around the ring with ease, sending her crashing into the canvas before crushing the third-generation Superstar with a devastating leg drop to pick up the victory in minutes.

Two of NXT's most confident Superstars clashed in this battle, as “The Greatest Man That Ever Lived” Austin Aries locked horns with “The Perfect 10” Tye Dillinger. The two competitors looked evenly matched as they traded holds in the opening moments, until Dillinger caught the speedy Aries with a backbreaker.

Dillinger appeared to have the advantage as he chopped A-Double, but the strikes only infuriated Aries. The Greatest Man That Ever Lived battled back, connecting with a rolling elbow that nearly knocked Dillinger out. Aries put The Perfect 10 away after a picture-perfect 450 Splash to remain undefeated in NXT.

After being on the receiving end of a blindside attack at the hands of The Revival last week, The Hype Bros were out for payback on Scott Dawson & Dash Wilder. The former NXT Tag Team Champions quickly swarmed Zack Ryder, trapping him in their corner and pummeling Long Island Iced-Z into the canvas.

With the NXT Universe rallying behind him, the former Intercontinental Champion found the energy to escape The Revival's clutches and tag in Mojo Rawley. Mojo charged at Dash & Dawson, clobbering his rugged rivals, but The Revival took advantage of Rawley's frantic pace, catching him with the Shatter Machine to win the match. Dash & Dawson are on a mission to reclaim the NXT Tag Team Titles, but will their fury be enough to dethrone American Alpha if they cross paths again?

The never-ending fiesta that follows No Way Jose wherever he goes made its way to Full Sail University this week. Though Jose loves to dance and have fun, he knows when it's time to fight. Noah Potjes found that out the hard way after tagging Jose with a big right hand. The blow wiped the smile off Jose's face and sent the dancer into a rage. No Way Jose knocked Potjes into next week with a huge right hand of his own before hitting a cobra clutch slam to pick up the victory and get the party started once again.

After his shocking arrival, Eric Young was granted a non-title showdown with Samoa Joe in this week's main event. Young went after the NXT Champion with no fear, trading blows with the 282-pound bruiser. EY stayed on the attack, ramming Joe into the turnbuckles and wearing Joe down. The submission specialist brought Young's time on offense to an abrupt end, hurling his rival over the ropes and following him to the arena floor with a diving forearm through the ropes.

Young tried to fight back, but Joe cut him off in vicious fashion before he could get going, crushing EY under his powerful frame. The NXT newcomer threw everything he had at Samoa Joe, but the NXT Champion had an answer for it all. Nevertheless, Young refused to stay down. The former heavyweight champion got his second wind, taking Joe to the mat with a suplex and connecting with an elbow drop from the top rope, but could only manage a two-count. Young's resilience only infuriated Samoa Joe, who hit the Muscle Buster and made Young tap out with the Coquina Clutch. Joe's emphatic victory was his way of sending a message to the entire NXT roster. Will anyone be able to answer the call and knock Samoa Joe off his pedestal? 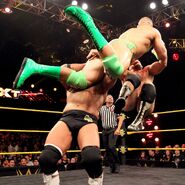 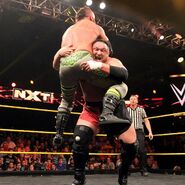