The May 4, 2012 Edition of Smackdown is a Professional wrestling television show of the WWE's Smackdown brand, which took place on May 1, 2012 at the Huntington Center in Toledo, Ohio.

After emerging victorious in a grueling 2-out-of-3 Falls Match at Extreme Rules, World Heavyweight Champion Sheamus informed the WWE Universe that he had again accepted the opportunity to do what he loved most: Fight! Specifically, The Great White would take on Daniel Bryan – the very same adversary that attempted to "tear [his] left shoulder off" at Sunday's explosive pay-per-view – in SmackDown's opening bout.

When The Celtic Warrior sent Bryan out of the ring at the height of their explosive showdown, however, Ricardo Rodriguez appeared from nowhere and leaped at Sheamus from the top rope. This cleared the way for Alberto Del Rio – the No. 1 contender to the World Heavyweight Championship – to lock the Irish Superstar's already injured appendage in the cross armbreaker. Then, after the Mexican Aristocrat released his grip, an irate Bryan reentered the ring and put Sheamus in the “Yes!” Lock.

As the submission specialist and Del Rio argued in the ring over the one anothers’ actions, the visibly-injured Sheamus was forced to leave the party. But, it would not be the last time the WWE Universe would see him before the night was over.

Four days after capturing the WWE Tag Team Titles on Raw SuperShow, R-Truth and Kofi Kingston set SmackDown ablaze with “Little Jimmy” at their side. While Hunico & Camacho competed as a Friday night tag team for the first time ever against the champs, Rosa Mendes and the former champions Epico & Primo watched the match from the top of the ramp. At their side was their new agent, All World's charismatic A.W.

In the midst of their high-octane offensive, the dynamic new titleholders used precision teamwork to take out the meddling Hunico. This set up Truth to hit the Flatliner on Camacho to pick up the three-count.

Five days after defeating Dolph Ziggler at Extreme Rules, Brodus Clay danced onto the scene flanked by his smoking Funkadactyls – Naomi and Cameron. The Funkasaurus prepared to battle Vickie Guerrero's other Superstar, Jack Swagger, as the WWE Universe went wild.

A distraction by Ziggler early on allowed his All-American cohort to gain the advantage. But, when The Show-Off tried to follow-up his extracurricular attack outside the ring – leaping at his target from the ring steps – Brodus took him down with a painful headbutt to his midsection.

Back in the ring, the steppin' Superstar regained control. However, when Brodus looked ready to hit the splash on his opponent, Swagger headed for the hills – allowing himself to be counted-out.

Despite being denied the pinfall, Brodus chose to celebrate, calling a bunch of young Funkateers into the ring to bust a post-match move.

Damien Sandow refused to compete in his highly anticipated SmackDown debut at the last moment, explaining – in condescending tones – that the WWE Universe wouldn't learn anything from him competing against such a “simple-minded ignoramus” like Derrick Bateman.

After the self-professed “Intellectual Savior of the Masses” made his enlightened exit, Bateman took issue. Insisting he earned a SmackDown match back on WWE NXT five months ago, Bateman proceeded to demand that he get what he was promised.

In retrospect, however, he should have quit while he was ahead because his face changed the instant Ryback answered the call. The ferocious up-and-comer made quick work on his outmatched prey, driving him into the canvas for another dominant victory.

“Extreme” fallout hit SmackDown in a big way, as the competitors of two of last Sunday's explosive showdowns joined forces.

Just when Big Show looked poised to hit the chokeslam on Cody Rhodes, Kane knocked him off his game with a fierce attack off the top rope. Moments later, The Big Red Monster was taken out by Randy Orton's RKO. Rhodes recovered, though, hurling The Viper into the steel ring post. But, when he attempted the Disaster Kick on Show, the recovered giant stopped him with a powerful hit to the chest – setting up the WMD on the Intercontinental Champion for the victory.

On the heels of triumph, The World's Largest Athlete looked fully prepared for his Intercontinental Title rematch, which the SmackDown announce team declared would take place during a WWE Live Event this weekend.

After returning from an injury suffered one year ago, Layla shocked the WWE Universe at Extreme Rules, capturing the Divas Championship from Nikki Bella. Five days later, she celebrated with a win over Natalya with the Lay-out neck breaker.

During Cesaro's photo shoot with Aksana, Eve made Teddy Long rub oil on the competitor.

For the second week in a row, AJ viciously slapped her best friend at the mere mention of Daniel Bryan's name.

Despite the intense pain of his arm injury, Sheamus insisted on finishing things with Daniel Bryan with a main event rematch of their bout at the top of the show. Preparing to face The Great White at WWE Over the Limit, Alberto Del Rio returned to ringside as well, joining the SmackDown announce team.

When Sheamus looked poised to overcome his foe, Del Rio climbed up on the ring apron. Bryan tried to take advantage of the distraction, only to get thrown into The Mexican Aristocrat. Moments later, Sheamus finished Bryan off with an earth-shattering Brogue Kick as his opponent leaped at him from the top rope. 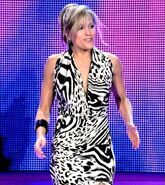 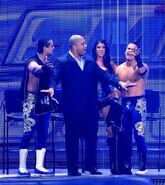 Retrieved from "https://prowrestling.fandom.com/wiki/May_4,_2012_Smackdown_results?oldid=1560914"
Community content is available under CC-BY-SA unless otherwise noted.