After betraying his best friend and #DIY tag team partner Johnny Gargano at TakeOver: Chicago, Tommaso Ciampa walked down to the ring on NXT with the help of crutches. The NXT Universe chanted “Why, Ciampa, why?” and let the former NXT Tag Team Champion know how they felt as he contemplated what to say about his callous actions less than two weeks prior.

Ciampa took aim at NXT fans for having the audacity to dream up potential tag team partners for Gargano after rumors circulated that an injury suffered by Ciampa the day before TakeOver was going to keep him out of action.

The unforgiving Superstar went on to explain that he injured his knee during the NXT Tag Team Title Ladder Match against The Authors of Pain. Ciampa rationalized that if given the opportunity to replace him, Gargano would have done that, just like the NXT fans wanted to do before TakeOver.

Whether you believe Ciampa's theory, he acted on it and turned TakeOver: Chicago into his moment. More than that, Ciampa made sure his “brother” would have to go away for a long time, just like he knew he was going to have to do because of his own injured knee.

In his first match since becoming WWE United Kingdom Champion at TakeOver: Chicago, Pete Dunne reigned supreme. The Bruiserweight impressed, not only with his hard-hitting offense, but his ability to withstand Danny Burch's ferocious onslaught.

This classic battle between two British brawlers ended when Dunne German suplexed Burch into the turnbuckle, setting up the Bitter End for the win.

If you simply went by the tale of the tape, the larger Bononi would appear to have the advantage in this contest, but Almas’ track record as a world-renowned luchador made him the heavy favorite.

Almas dominated the contest behind his robust offensive arsenal, but Bononi reversed a suplex into a small package to pick up the pinfall and the shocking victory.

Almas was irate immediately following the bout, but quickly composed himself as he appeared to brush off the loss.

Roderick Strong's rivalry with SAnitY continued with the new father picking up another victory over the unhinged Superstars.

Strong teamed with Kassius Ohno against Eric Young & Alexander Wolfe in a wild tag team showdown. The frightening faction tried to pick up the victory behind Killian Dain's intrusion, only to watch No Way Jose spoil their plans.

Returning to NXT for the first time since SAnitY ambushed him at WrestleMania Axxess, Jose ran to the ring to pull the monstrous Dain off the apron, allowing Ohno to hit the rolling elbow on Wolfe and Strong to nail Young with the “End of Heartache” for the victory. 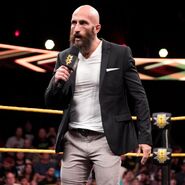 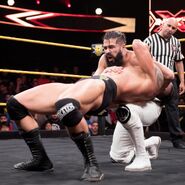 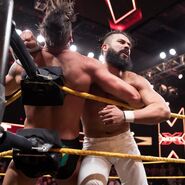 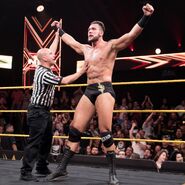 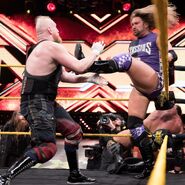