The May 31, 2004 Edition of RAW is a Professional wrestling television show of the WWE's RAW brand, which took place on May 31, 2004 at the Bell Centre in Montreal, Quebec, Canada.

Eugene scored undoubtedly the biggest win of his career on Monday Night RAW, although he paid a price for it. Eugene defeated Kane by disqualification; however, Kane hit Eugene with a chokeslam after the match, and was about to give him a piledriver. Fortunately, Chris Benoit—who put the World Heavyweight Championship on the line against Kane at Bad Blood—made the save.

Elsewhere on Monday Night RAW, it was announced that Gail Kim would face Victoria for the Women's Championship at Bad Blood. And another match was officially made for Bad Blood: Shelton Benjamin defeated Randy Orton on RAW, thus earning a shot at the Intercontinental Title at Bad Blood.

For the second straight week, Chris Jericho was assaulted by Trish Stratus and Tyson Tomko. 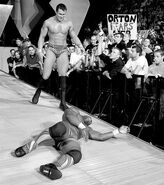 Retrieved from "https://prowrestling.fandom.com/wiki/May_31,_2004_Monday_Night_RAW_results?oldid=969340"
Community content is available under CC-BY-SA unless otherwise noted.