The May 30, 2011 Edition of RAW is a Professional wrestling television show of the WWE's RAW brand, which took place on May 30, 2011 at Qwest Center Omaha in Omaha, Nebraska.

John Cena was on to something. The WWE Champion asked R-Truth if he'd had a traumatic childhood experience with somebody named “Jimmy.” After all, the furious Superstar continues to blame all the “little Jimmys” in the WWE Universe for not getting more title opportunities. The Champ was also on Truth's hit list. After demolishing a merchandise stand featuring Cena T-shirts, hats and programs, Truth emerged in the arena and harassed various attendees wearing Cena merchandise and spouting off about the “conspiracy” against him.

The Champ had seen enough. He confronted his former friend and challenged him to a match. Truth accepted, and the anonymous Raw General Manager made it official.

During his tirade at the top of the show, Raw experienced technical difficulties, which Truth believed was no accident. Later, he tweeted: “ You people see what I mean? I speak the TRUTH and WWE audio goes out! Conspiracy!! WWE has been conspiring and tonight was proof!”

Dolph Ziggler has been doing his homework – and it shows. The freshly-blond chameleon has been studying U.S. Champion Kofi Kingston's matches for the past several weeks before the two faced off in a non-title bout. Thanks to his speed, agility and scouting, Ziggler managed to overcome The Dreadlock Dynamo.

The audacity of Alberto Del Rio is sickening in any language. The Mexican Aristocrat addressed the WWE Universe regarding his assistant, Ricardo Rodriguez, driving over Big Show's leg last week in one of his boss’ luxury automobiles. Del Rio, as well as Rodriguez, insisted the incident was a mistake. The moneyed Mexican then told The World's Largest Athlete, who was forced into rehab as a result of his injuries, that he would be sending him a bill to cover the damages to his car.

When Eve & Kelly Kelly clashed with Divas Champion Brie Bella & her sister, Nikki, one dominant Diva was most assuredly on their minds. After her bizarre breakdown last week, Kharma was scheduled to address the WWE Universe later in the evening, which may have been why she didn't show up during the match. As a result, Eve & Kelly enjoyed a successful match, in which the gorgeous duo toppled the sinister siblings.

Judas, Benedict Arnold ... Alex Riley? Michael Cole accused Riley of backstabbing his former boss, The Miz, in no uncertain terms. Last week, after The Cleveland Screamer had unfairly fired his former loyal protégé, Riley unleashed weeks of aggravation on Miz. This week, Cole lambasted the longtime lackey for his actions. When Riley finally tried to silence the arrogant announcer, The Miz ambushed him. Riley quickly turned this to his advantage, however, sending The Awesome One scurrying.

Rey Mysterio scored the victory over CM Punk last Monday night in a tag team match, but this week, The Second City Savior found salvation. The leader of The New Nexus, accompanied by powerhouse Mason Ryan, relished exacting revenge on his longtime rival. He avoided the high altitude assault let loose by The Master of the 619 and dropped his nemesis with a jaw-rattling kick to the head.

One week after suffering a tear-stained meltdown in the center of the ring, Kharma addressed the WWE Universe. She explained that she has had two dreams in her life, to become a WWE Superstar and to become a mother. One down, one to go. And now the braided behemoth is well on her way – she's pregnant! After informing the crowd that she cannot compete as a result, The Bella Twins emerged and berated her. She then told the terrible two that she eagerly awaits returning after having her child, so she can seek retribution against the sisters.

The lesson for Jack Swagger? Overconfidence kills. Last week, The All-American American undertook an egotistical victory lap after his win over Evan Bourne, and the high-flyer dropkicked him out of the ring in retaliation. This week, just as it appeared Swagger could do no wrong, he did. In fact, his impudence led to a crucial mistake. Bourne quickly seized the opportunity and capitalized for the win.

R-Truth may be crazy, but he's not stupid. After landing a non-title match against WWE Champion John Cena, the delusional Superstar made the best of it. During the bout, he slid out of the ring and traded blows with his opponent. After a good bit of cat-and-mouse, Truth made a beeline back into the ring. When he hopped over a security barricade, Cena tried to follow, but Truth leveled him with a forearm to the head. The demented Superstar then quickly slid back onto the canvas, and The Champ was counted out.

Truth then jumped back over the barricade and confronted a “little Jimmy” in the audience, who he had also picked on at the top of the broadcast. He snatched the youngster's drink cup and splashed his father with it.

The Champ quickly came to the pair's defense, but his conspiracy nut rival had already fled. Then, after Raw went off the air, the anonymous Raw GM announced that Truth will receive a WWE Title Match at Capitol Punishment if, and only if, he apologizes next week on Raw. 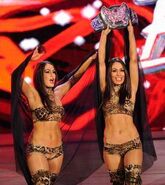 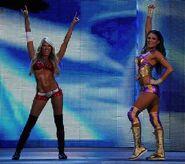 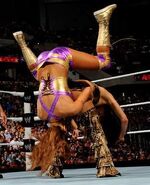 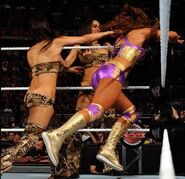 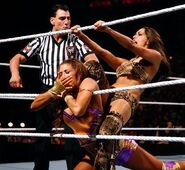 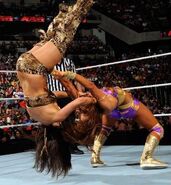 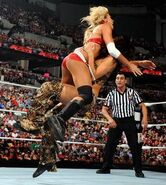 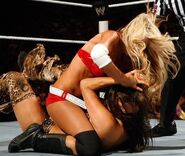 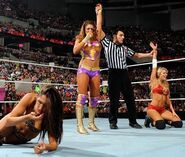 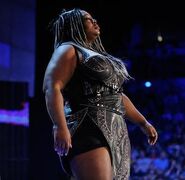 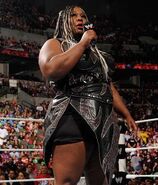 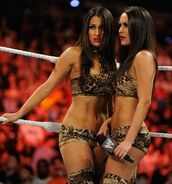 Retrieved from "https://prowrestling.fandom.com/wiki/May_30,_2011_Monday_Night_RAW_results?oldid=1560876"
Community content is available under CC-BY-SA unless otherwise noted.