The SAnitY cheering section was uncharacteristically thin this week, as only Eric Young accompanied big Killian Dain to the ring. Despite this, Dain didn't seem any worse for wear in his match against slugger Danny Burch, as he battered the rugged Englishman with a rib-cracking senton and a massive running dropkick. Unable to match Dain's immense size and strength, Burch soon fell to the Ulster Plantation, giving The Beast of Belfast a decisive victory

Tucker Knight & Otis Dozovic pack an appetite wherever they go, and that spelled bad news for Hector Kunsman & Ricardo Watts. Heavy Machinery snacked on them like a couple of hor d’oeuvres, highlighted by Knight using a belly-to-belly suplex to throw Kunsman the length of the ring. He then joined Dozovic for an unorthodox, but mightily effective double-team attack, leaping on Dozovic's back as he powerslammed Kunsman & Watts, flattening both men beneath Heavy Machinery's combined 650 pounds.

After the ref administered a three-count, Knight & Dozovic declared that they're hungry for the main course: NXT Tag Team Champions The Authors of Pain.

Prior to his bout with the returning Hideo Itami, Kona Reeves was observed conversing with NXT Champion Bobby Roode in the locker room, prompting speculation that The Glorious One was hatching a plot against the Superstar who knocked him out two weeks ago.

That conclusion seemed well founded when Reeves jumped Itami before the bell. The sneak attack gave Reeves an early advantage, but the youngster's hubris soon caught up with him: As the Hawaiian Superstar began disrespecting his legendary foe, Itami came unglued, nailing him with a strike that echoed throughout Full Sail University and cutting him down to size with a series of wicked kicks. The NXT Universe chanted “GTS,” and Itami obliged, decimating Reeves with the Go-To-Sleep for the emphatic win

When the dust settled, no one woman was declared victorious — Asuka saw to that much — but three title contenders still emerged, despite The Empress of Tomorrow's best efforts.

The over-the-top-rope fray was a true battle of attrition, and the action was unrelenting from the start. As competitors like the hard-hitting Sonya Deville and former Marine Corps military police officer Lacey Evans fell by the wayside, the field eventually tightened to six Superstars: Ember Moon, Ruby Riot, Nikki Cross, Liv Morgan, Billie Kay and Peyton Royce. Once Cross removed Liv from the equation and Moon took out The Iconic Duo, the three finalists turned their sights on each other.

Ember connected with the Eclipse against Cross, but an attempt to do the same to Riot was blocked when Asuka ran to the ring and shoved her off the turnbuckle, causing the NXT officials to call for the bell. Asuka then mercilessly fired Moon through the ropes to the floor before attacking Riot and Cross.

Asuka's bid to seemingly eliminate her competition may have backfired, though. General Manager William Regal, appearing distraught over the turn of events, entered the scene and announced that The Empress of Tomorrow will face not one, but three challengers when she battles Ember Moon, Ruby Riot and Nikki Cross in a Fatal 4-Way Match at TakeOver: Chicago on Saturday, May 20. 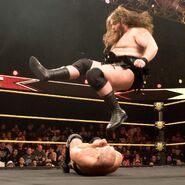 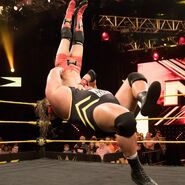 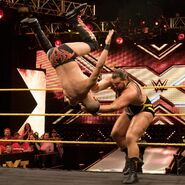