The May 3, 2004 Edition of RAW is a Professional wrestling television show of the WWE's RAW brand, that took place on May 3, 2004 at the America West Arena in Phoenix, Arizona.

He was so close to victory, he could taste it. Shawn Michaels hit the Sweet Chin Music. World Heavyweight Champion Chris Benoit was lying in the middle of the ring. All Michaels had to do was cover Benoit and the classic Monday Night RAW match would have been over. Michaels was going to become the World Champion once again.

And just as fast as it seemed that HBK would pull off a thrilling victory, the Showstopper was defeated. Triple H said for two weeks that he belonged in this match ... and he made his presence felt. With the referee knocked out, Triple H entered the ring and gave Michaels the Pedigree. A bloody Benoit capitalized by crawling over to cover Michaels for the win as Triple H could only smile at ruining the night for Michaels.

RAW also featured a staggering upset in the women's division when Gail Kim defeated Women's Champion Victoria in a Non-Title Match when Kim forced Victoria to tap out.

Also on RAW, the situation involving Kane, Lita and Matt Hardy took a new turn when Hardy appeared on Chris Jericho's Highlight Reel. Hardy said he wanted to "make things right" and called Lita to the ring in an attempt to "rectify mistakes" he had made. But seconds after calling Lita to the ring, the Diva appeared on screen from the boiler room where she was tied up by Kane. Hardy quickly ran to the aid of Lita—Kane had left by the time Hardy arrived—who was visibly shaken by yet another encounter with the Big Red Monster.

The team of Edge, Shelton Benjamin and Tajiri also overcame Evolution (sans Ric Flair) in a six-man tag team match when Edge hit Randy Orton with a Spear for the pinfall victory. 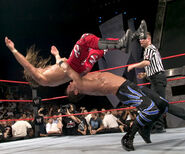 Retrieved from "https://prowrestling.fandom.com/wiki/May_3,_2004_Monday_Night_RAW_results?oldid=1560860"
Community content is available under CC-BY-SA unless otherwise noted.