After the brutal ending to last week's match between Bayley and Nia Jax, NXT General Manager William Regal revealed that Bayley was not cleared to compete and would not be cleared in time to get her rematch against NXT Women's Champion Asuka at TakeOver on June 8. Though Bayley will get her opportunity down the line, Regal announced that Nia Jax, Carmella and Alexa Bliss would square off in the evening's main event to determine Asuka's challenger in two weeks.

After their introduction to the NXT Universe on Facebook Live last week, Shane Thorne & Nick Miller of TM-61 were out to make their NXT debut a successful one. But standing in their way was the red-hot duo of Johnny Gargano & Tommaso Ciampa. The two teams looked evenly matched as they jockeyed for position, until Thorne clocked Gargano with a dropkick to take control for TM-61.

The Australian duo succeeded in keeping Gargano in their corner, but the speedy Johnny Wrestling eventually slipped out of their grasp and tagged in Ciampa. The hard-hitting Milwaukee native staggered Miller at first, but TM-61 recovered and took Ciampa to the mat, showing off an impressive double-team maneuver that wowed the NXT Universe.

The two teams left it all in the ring, but after Miller was taken out by a dive from Gargano, Thorne found himself alone in the ring with Gargano & Ciampa, who walloped him with a running knee/superkick combination to earn the victory. After a bout that brought Full Sail University to its feet, Gargano & Ciampa gave a nod of respect to TM-61, who made their mark on NXT.

After admitting he's been flying under the radar in recent weeks, Austin Aries took to the ring to make his goals in NXT known. Saying he's tired of being overshadowed by other recent arrivals in NXT, “The Greatest Man That Ever Lived” declared that once NXT Champion Samoa Joe and Finn Bálor settle their score at TakeOver, he will take the title from whoever walks out of the steel cage on June 8.

However, another blockbuster NXT signee took umbrage at Aries’ bold statement: Shinsuke Nakamura! The King of Strong Style said the NXT Championship would instead be around his waist in the not-so-distant future. Recognizing a big opportunity, Regal arrived to see that the score is settled between Nakamura and Aries, arranging for a one-on-one encounter between them at NXT TakeOver: The End... in two weeks. The two competitors shook hands afterward, but will the good sportsmanship last when they lock horns on June 8?

The fiesta made its way to Orlando as No Way Jose returned to action. Fresh off taking over social media on No Way Day, Jose showed once again that he can fight as well as he can dance. The fun-loving Superstar put Jonathan Ortagun away with a huge right hand and a cobra clutch slam to win the battle and get back to dancing.

With an NXT Women's Championship match hanging in the balance, all three Superstars were willing to do whatever it took to get the huge opportunity. For Alexa Bliss, that meant watching the bout from ringside and letting her two rivals duke it out, waiting for the right moment to strike. For Carmella, it meant showing no fear and going after the towering Nia Jax. For the powerful Jax, it meant using her strength to punish The Princess of Staten Island.

That is how the bout played out early on, with Carmella showing a ton of heart, withstanding the devastation caused by Jax, only for Alexa to sneak in and try to steal the title opportunity. The small but fierce Bliss took advantage of Nia diving shoulder-first into the ring post, pummeling Carmella and hitting Jax with the Sparkle Splash.

Jax reasserted her dominance, simultaneously suplexing her two rivals before catching a diving Carmella on the arena floor. The Princess of Staten Island recovered and tried to earn a submission victory, first with an inverted triangle hold on Bliss, then a sleeper hold on Nia. Carmella tried to stay on the attack, but the powerful Nia Jax caught her in the corner, slammed her to the mat and crushed Carmella with a leg drop to move on to TakeOver.

Though Jax was riding high after her victory, she soon found herself face to face with the NXT Women's Champion, who smiled before taking another step closer to the new No. 1 contender. The towering challenger warned Asuka not to get that close again before TakeOver, but the NXT Women's Champion answered only with the devilish smile that has spelled the demise of her foes. Will it be the same for Jax in two weeks at TakeOver: The End...? 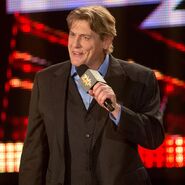 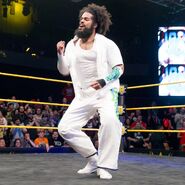 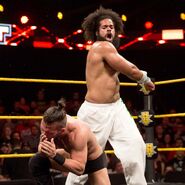 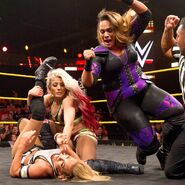